Rebellion in the Ranks

Mayawati is tracking this revolt anxiously, but she is also trying her best to play it down 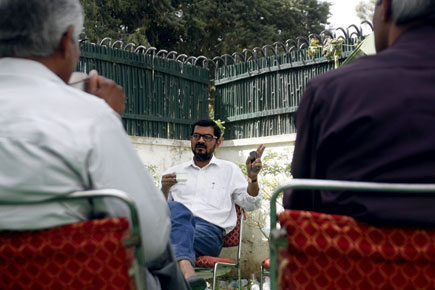 Mayawati is tracking this revolt anxiously, but she is also trying her best to play it down


NEW DELHI ~ Knives are out in the Bahujan Samaj Party (BSP). The unrest, building up in the party for quite some time, is now out in the open—as a vocal section of its leadership attacks BSP chief Mayawati, accusing her of “trampling” the ideals of Kanshi Ram, “selling” the Bahujan movement to its enemies, and turning the party into “an ATM machine”. While Mayawati has been holding her punches for the moment, the war cry of rebels seems to have started galvanising a substantial portion of the party’s cadres and regional leaders—particularly those belonging to its core social/caste base of Jatavs (often called Chamars) in different parts of the country. For the first time in its history, the BSP faces the threat of a vertical split in its ranks.

An eruption took place on 23 March, when senior BSP functionaries Ram Prasad Mehra and Pramod Kureel raised a banner of revolt against Mayawati’s leadership and decided to operate in parallel within the organisation. “We are doing it with a heavy heart. But now that we have taken this path, there is no going back till we rescue the Bahujan movement from the clutches of Brahminism,” says Kureel, adding, “The issue is to save this movement. The BSP is now far away from what was envisaged by Kanshi Ram. We will work to see that the dreams of Kanshi Ram become a reality.”

While Kureel is a Rajya Sabha member and national secretary of the BSP, Mehra is the seniormost whole-time activist and a founding member of the party. Both are of the Jatav subcaste. Before speaking to the media on 23 March, the duo held a meeting of nearly 100 associates of Kanshi Ram at Kureel’s official residence on North Avenue, New Delhi. The rebels decided to hold nationwide meetings to ‘expose’ the present leadership of the party before holding an all-India convention of BSP workers to determine their future course of action.

“We have decided to go ahead in a phased manner. In the first phase, we are calling a meeting of only senior party leaders and associates of Kanshi Ram from various parts of the country. We are already in touch with a multiplicity of leaders in Uttar Pradesh, Punjab, Maharashtra, Madhya Pradesh, Tamil Nadu, Kerala and Bihar. Family members of Kanshi Ram will also participate in this meeting,” Kureel says, “I won’t be able to reveal any further details of our plan. But I promise that you won’t have to wait for long. Now things will move very fast—faster than Mayawati can anticipate—because we don’t face a dilemma anymore.”

BSP rebels claim that they have the support not just of more than half the party’s cadre—and over three-fourths of all Jatavs among them—but are also being backed by several MPs and MLAs of the party. “The MPs and MLAs have their own compulsions. They have therefore asked not to be forced into the open on the issue till things take forceful shape,” says Kureel, explaining how he does not have to feign loyalty to Mayawati since his Rajya Sabha tenure ends on 2 April.

Though a senior BSP leader tells Open that the upsurge is being watched with deep anxiety by Mayawati, for the time being she has chosen to play down the rebellion. “This is a politically motivated move. They should not have done this,” says Ambeth Rajan, a Rajya Sabha MP of the BSP and also party treasurer.

As for the nature of the threat Mayawati faces, Kureel says, “The development is not just an eruption, but an earthquake.” Several party leaders in UP, contacted over the phone, have voiced themselves in similar ways. This development comes merely two weeks after the BSP’s electoral defeat in Uttar Pradesh. This is all the more significant because it is the first time that the party’s Jatav leaders have turned against Mayawati, a Jatav herself, and that too on an issue as fundamental as the party founder’s dream, which is still cherished.

When Kanshi Ram (incidentally also a Jatav) had identified Mayawati as his preferred successor a decade ago, a section of the party’s leaders—most of them non-Jatav Dalits and contemporaries of the BSP founder—had responded with a puzzled frown. Many at that time had doubted if she had the political acumen required to accomplish the unfinished tasks of Kanshi Ram. A large number of partymen who had been members of the Backward and Minority Communities Employees Federation—BAMCEF, which was set up by Kanshi Ram in 1973 and served as a launch pad for the BSP in 1984—had registered loud protests. Some of these leaders, including Kanshi Ram’s loyalist RK Chowdhary, even revolted and quit the party in a huff.

Though Chowdhary was a prominent Passi leader (of another Scheduled Caste, that is), his revolt did not hurt Mayawati’s career. She also seemed unfazed by the BAMCEF insurgency against her ascent to the BSP’s top post. Many BSP observers believe she could shrug and look away largely because she had the unqualified support of Jatav leaders at the time. In fact it was this support that proved critical for her as she set out to steer the BSP through turbulent times.

In 2007, when Mayawati led the BSP to a stunning victory in the UP Assembly polls, she managed to give her Jatav supporters a fresh burst of enthusiasm. But as she started leaning heavily on Brahmin leaders in particular and on non-Jatav castes in general, the same supporters began to resent her new ways.

Jatavs account for more than half of UP’s Scheduled Caste population, and they have remained at the core of the ‘Bahujan’ revolution in the state. Kanshi Ram had always understood the importance of this subcaste in imparting momentum to the state’s Dalit upsurge, and had, therefore, created a strong Jatav leadership base across UP. Today’s rebels argue that Mayawati not only failed to nurture this, but even did her best to dismantle it. “[Jatavs] are the backbone of the Dalit movement in the state,” asserts Kureel, “We are expressing the feelings of all partymen of this subcaste.”

About two years ago, as discontent grew in the ranks, some of those unhappy with Mayawati’s style of functioning formed an informal group within the party to ‘educate’ the cadre. Called the Bahujan Samaj Mukti Morcha, the group held a series of conventions at Lucknow, Faizabad, Allahabad, Saharanpur, Bareilly and Delhi. Many in the BSP believe that these conventions, while they maintained a low profile, concretised the anger of Jatav leaders of the party. Now that the war cry has been sounded, the Morcha has taken up the large-scale task of mobilising party cadres against Mayawati.

Right until the very last moment, however, BSP rebels had been unsure whether the simmering unrest would actually get beyond secretive meetings and conspiratorial whispers, and, if it did burst out, how the symbolism of Kanshi Ram could best be played against Mayawati. “The battle of nerves would have continued longer had Mayawati not made the mistake of evicting Mehraji, who is a respected figure in the party, as cadres see in him a reflection of Kanshi Ram,” says Kureel.

The ‘mistake’ that Kureel talks about was made on 22 March, when Mayawati ‘evicted’ Mehra from his accommodation at 12, Gurudwara Rakabganj Road. Mehra had even lodged a complaint at the Parliament Street Police Station against Mayawati for having had his locks broken and belongings ejected. Mehra also claims in his complaint that he was threatened with dire consequences for defying Mayawati’s order to vacate the property.

This accommodation has symbolic value for party workers, as it was from here that Kanshi Ram led his party from 1991 onwards (it even served as a memorial after his death).

Mehra had been living there for the past two decades and had used the premises to edit the BSP mouthpiece Bahujan Sangathak, a publication launched by Kanshi Ram to communicate with party cadres that was discontinued soon after his death by Mayawati. She famously decided to wind up Bahujan Sangathak and replace it with a magazine titled Maya Yug.

To sceptical BSP leaders, that was an early signal of things to come. In the years ahead, to their horror, they saw a cult emerge around Mayawati. The rude eviction of Mehra, as it turns out, has now served to convince cadres that the rebels had a point all along: that Mayawati was hellbent on replacing every trace of Kanshi Ram’s legacy with her own imprint. Now that she has lost power, they are in no mood to forgive her.