Buddhadeb Bhattacharjee’s proposal to turn this college into a university is being opposed, predictably, by Bengal’s communist ancien regime. 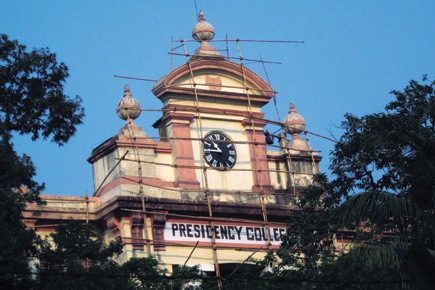 A move to turn this college into a university is being opposed by Bengal’s communist ancien regime.


Chief Minister Buddhadeb Bhattacharjee is attempting a Gorbachev, albeit in a limited manner. He has kicked off a move to unshackle Kolkata’s 192-year-old Presidency College, of which he’s an alumnus, from the notorious grip of his party apparatchik by converting it into a unitary university.

This is a move that has excited the academic community in the state, earned the beleaguered Bhattacharjee some kudos, and also triggered howls of protest by the CPM-backed Government College Teachers’ Association (GCTA), most of whose members became teachers because of their affiliation to the party. The commissars in his party, aghast at the prospect of losing their often-abused powers of patronage over a premier institution, are also making their displeasure felt. But Bhattacharjee, determined to introduce the Bill upgrading the college to a university in the ongoing winter session of the state Assembly, has the backing of Bengal’s intelligentsia, most of whom had studied in the college anyway.

Presidency, which started as Hindoo College in 1817 before morphing into its present avatar in 1855, is credited with incubating the Indian Renaissance, having produced many of the country’s leading lights in all fields till the 1960s. The decline started in the early 1970s, with left and ultra-left politics creeping into the campus. The journey downhill was hastened by the CPM, which, after coming to power in 1977, initiated measures to make Presidency just another ordinary government college. For doctrinaire Marxists, an independent centre of excellence like Presidency was ‘elitist’ and hence anathema. “The party posted its loyalists as teachers and non-academic staff, hounded out the brilliant teachers, starved the college of funds and did all it could to degrade this college. Other institutions like Calcutta University also suffered due to such policies,” says economist Abhirup Sarkar, who is also an alumnus of the college. “Pernicious political interference by the Left Front has destroyed the pride and glory of Presidency,” adds economist Dipankar Dasgupta.

That 15 students failed their undergrad exams this year—unimaginable at a college through whose hallowed portals people like Dr Rajendra Prasad, Meghnad Saha, Bimal Jalan and Amartya Sen passed—is proof of the decline that Presidency has suffered. If more is needed, consider this: as many as 106 students migrated to other institutions after securing admission to Presidency this year. “This is unthinkable. A seat at Presidency was like a dream come true during our days. The best and the brightest would compete fiercely in the admission test to gain entry,” recalls nuclear physicist Bikash Sinha.

But while everyone from the college’s students and its principal, Sanjib Ghosh (also from Presidency), to Bikash Sinha and Amartya Sen are rejoicing over the university proposal, they also acknowledge that “making a one-time centre of excellence into a world class university” (Sinha’s words) is an uphill task. “The present infrastructure is inadequate for a university. A new campus is required. The new university cannot be served by a floating body of government college teachers whose posting at Presidency is a matter of accident. Fresh recruitments will have to be conducted and a place in the faculty thus shouldn’t be assured to the present teachers,” warns Sukanta Chaudhuri, an eminent teacher of English who passed out from Presidency and taught at the College for 19 years.

The fact that teachers of government colleges may no longer get posted to Presidency after lobbying the Marxist apparatchiks is precisely the reason why they’re protesting the move to upgrade the college. Their fears that they won’t find place in the new setup are well-founded, given their mediocre (or worse) track records. Chaudhuri calls this the “biggest roadblock to a smooth transition” from Presidency College to Presidency University. That a sharp decline in teaching standards is what ails Presidency the most is evident from the statements issued by prominent alumni. “It is vital to have good teachers. It would be fantastic to have teachers of the calibre of Sukhomoy Chakraborty (economist) at Presidency once again,” Nobel laureate Amartya Sen stated. “Recruitment of teachers should be on merit, not political affiliations as is the case now,” emphasises poet Sankha Ghosh. Dipankar Dasgupta is more blunt: “Some of the faculty at Presidency don’t deserve to teach here.”

The GCTA that’s opposing Presidency’s proposed ‘unitary university’ status, though, is unfazed. Its members want it to be a university that other colleges are also affiliated to so they can continue to have their tenures at Presidency, thus undermining the whole exercise. “All 36 government colleges should get affiliated to the proposed Presidency University, or all these colleges, including Presidency, should be brought under a new university to ensure overall improvement of all colleges, not just one college alone,” says a GTCA leader. He adds that the 1,500-odd teachers in the association (including 150 from Presidency) would launch an agitation that could even culminate in an indefinite strike if the government goes ahead with the plan.

Prominent academics say that the intention behind the Chief Minister’s bold move was to free Presidency from the GCTA’s grip, stop political interference in recruitments and other campus and academic affairs and restore the college’s lost glory. “The GCTA’s stand is unfortunate,” says academic Amal Mukhopadhyay, who once served as Presidency College principal. “Everyone wants this upgrade and it is sad that a small section is opposing the move for their narrow and vested interests,” says Sanjib Ghosh.

The college, on its part, has dusted out a 1995 roadmap to revamp its governing body, of which Mukhopadhyay is a member. “The plan was prepared keeping in mind our demand for a deemed university status. It’ll now have to be upgraded further,” he says. The roadmap includes a syllabus revision for all subjects, introduction of new subjects like ergonomy and demography that haven’t been tried out elsewhere, introduction of the participatory style of teaching, continuous assessment of students that would include reference work, time spent in the library and project work at each semester, and the introduction of a ‘bouquet system’ where students can opt for subjects unrelated to their main papers.

Many of these have already been implemented at St Xavier’s College, which broke out of the Calcutta University mould three years ago to become the state’s first autonomous college, with excellent results. “Autonomy helped us update and trim our syllabus. Our students have learnt much more than they used to earlier when we were under Calcutta University and have learnt to put what they’ve learnt to practical use. That’s why a host of top recruiters like Wipro, Global Solutions, Bank of America and GE Countrywide have recruited our students at high salaries this year,” says St Xavier’s Principal Father Felix Raj.

This is exactly what Presidency’s students, its alumni, ex-faculty and some of its present faculty want as well. But, as Sukanta Chaudhuri argues, the problem goes beyond the college. “Presidency cannot flourish in isolation. It can flourish as the apex of a respectable system of universal schooling and not in a structure that has 60,000 missing teachers in primary schools for poor children. Till those schools provide student catchments across social and economic divides, institutions like Presidency cannot flourish.” This thought, he adds, “ought to temper the current Bhadralok elation over the Presidency (upgrade)”. Is Bhattacharjee listening?