With history as backdrop, China flexes it military muscle. Is India taking notice? 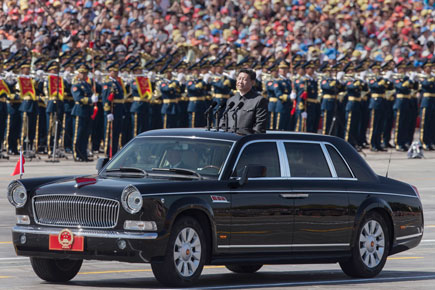 The Chinese people’s Liberation Army will be getting rid of 300,000 soldiers from its ranks in a bid to shed deadweight, reduce overheads, and use the savings to buy more high-tech ships, planes, and turn itself leaner and more professional. But even with these cuts the Chinese military—which currently has more than 2 million troops — will remain the largest in the world. While the army might be getting downsized, China’s ambitions in the region are expanding, and the move is largely about jettisoning the burdensome Soviet-era command structure and making the overall force more agile.

Chinese President Xi Jinping announced the cuts in a public address after a military parade that celebrated the 70th anniversary of the country’s victory over Japan in World War II. The parade was a chance for Xi to stir his country’s nationalist feelings and also to assert his own authority by announcing plans to restructure China’s bloated military. The savings will be used to pay for new modernisation programmes of the Chinese navy and air force, as well as funding cyber operations and raising the pay and living conditions of those who the military most wants to keep.

The Chinese military parade—its biggest so far—was aimed at delivering multiple messages. For the domestic Chinese populace, the Chinese Communist Party underlined its centrality not only in the nation’s past when Japanese invaders were tackled effectively, but more importantly, now, when China seems to be moving closer to achieving the status of a great power. For the global audience, and in particular for the region, the message of the Chinese leadership was also clear: Chinese ambitions are expanding and it now has the wherewithal to protect and enhance those interests, be they in the Taiwan Strait, East China Sea, South China Sea or the larger Indo- Pacific. One important aspect of the parade was the first public appearance of the Dongfeng 21D ‘carrier-killer’ ballistic missile. The US military is increasingly concerned about the DF-21D, as its speed makes it difficult for vessels to defend against. The DF-26, with a range of over 5,000 km allowing it to reach anywhere in the South China Sea as well as the US naval base in Guam, was also on display.

There still remain many unanswered questions about the future trajectory of the new Chinese reform programme, including what it means for the top-heavy leadership structure and what role the reserves and the country’s civilian militia will play in national defence and projecting Chinese power abroad. But what remains certain is that the Chinese military of the near-future will be different from the Chinese military of the recent past. And this will predictably cause consternation in the region and beyond. Already, regional powers are responding to the rise of China in several ways.

Japan has reconfigured its defence orientation from deterrence of a Soviet invasion from the north to a ‘dynamic defense force’ capable of rapid response to threats anywhere in Japan—especially to defend or retake its remote south-western islands facing China. In 2014, Japan’s defence budget grew by 2.2 per cent, its first rise in over a decade. The Abe administration has also loosened a decades-old ban on arms exports and ‘reinterpreted’ Japan’s constitution so that the Japanese Self- Defense Force could come to the assistance of allies and friends in conflicts, partially lifting a longstanding, self-imposed prohibition on collective self-defence. Indeed, under the aegis of ‘proactive contribution to peace,’ Abe has presided over the greatest upgrade to US-Japan defence cooperation in many decades. His government has also stepped up cooperation with Southeast Asian countries entangled in maritime disputes with China, helping Vietnam and the Philippines acquire patrol vessels and professionalise their coast guards.

China’s disputed territorial claims in the South China Sea and its willingness to assert those claims with a military build-up has rattled some countries in the region, pushing them towards closer military cooperation with the US. America has reached an agreement with Malaysia to let American P-8 Poseidon and P-3 Orion spy planes use air bases in the country to spy on Chinese activity in the waters off Malaysia’s coast. The Philippines has also welcomed the US plan to deploy air and naval assets to the country as part of the next phase of Washington’s rebalance towards the region. The US troops are likely to have access to at least eight Philippine military bases under the Enhanced Defense Cooperation Agreement (EDCA) signed last year between the two states.

In a sign of warming US ties with Hanoi, Washington has partially lifted a 40-year ban on providing lethal military support to Vietnam in order to enhance its maritime security. The arms embargo was a major stumbling block on the American side of the road to closer US-Vietnam relations. In a significant change in the communist regime’s attitude toward Washington, Hanoi has decided to allow the US Peace Corps to operate in Vietnam.

Australia-US defence cooperation has also intensified as Washington has elevated Australia in its defence priorities. This is leading to greater American use of and investment in Australian defence bases and training and logistics facilities, especially in northern and western Australia. The two will be the two most integrated military forces in the world, if they are not already so. In 2014, Australia and the US signed a new Force Posture Agreement that will see 2,500 Marines and dozens of US warplanes and warships exercising and replenishing themselves at Australian ranges and bases. Australia also plans to boost its military spending to 2 per cent of GDP within a space of 10 years, a substantial part of which will go to a stronger blue water presence for Australia’s navy, including 12 new submarines, nine frigates and up to 20 offshore patrol vessels.

India too has been recalibrating its regional ties at this time of strategic flux. China’s display of its military might should once again prod New Delhi to invigorate its defence policy and diplomacy to tackle the rising dragon in its vicinity. India will host its first-ever bilateral naval exercise with Australia this month starting from 11 September, and a Jimex maritime exercise with Japan in November. India has also invited Japan to join its Malabar exercise with the US in the Bay of Bengal after eight long years. Although Australia and India have participated in military events and exercises together before as well, this will be the first time that the two nations will be jointly planning and participating in a military drill of this nature. The Modi Government has made a good start, but much more needs to be done if the aggressive intentions of China are to be effectively thwarted.

(Harsh V Pant is a professor of international relations at King’s College, London)