A walk through the grand alleys of Mughal history and the imprints of the rise, decline and fall of the imperial capital of Shahjahanabad, which is now being redeveloped 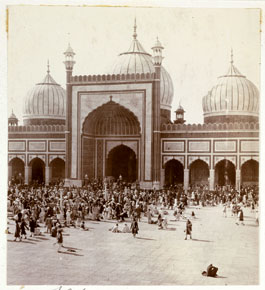 A walk through the grand alleys of Mughal history and the imprints of the rise, decline and fall of the imperial capital of Shahjahanabad, which is now being redeveloped

After over seven years of bureaucratic apathy, confusion, indifference and lack of long-term planning to revive the once Mughal capital, work on the redevelopment of Shahjahanabad has begun.

The name ‘Shahjahanabad’— the place itself laid out by the Mughal Emperor in the middle of the seventeenth century—might conjure romantic images of a bygone era, but the reality is far more cruel. A walk down Chandni Chowk makes this no easier to accept. Except for tourists, both foreign and domestic, most of those in New Delhi look down upon Old Delhi as a crowded and noisy place that is best avoided. Their lack of an emotional connection with a part of the city that was for over 200 years the actual capital can be blamed on the fact that successive governments of independent India have looked at Shahjahanabad the same way it was viewed by the British colonial government.

From the Red Fort, one has to cross the busy Netaji Subhas Marg towards Gauri Shankar Mandir; hopping over piles of garbage and pools of urine that have leaked out of broken public urinals and onto the uneven and broken pavements that have long since given way under pressure of encroachments and temporary stalls selling everything from unbranded inner-wear to footwear and flowers. One has to negotiate one’s way while getting elbowed by eager buyers, pushcarts and rickshaws, with motor cars honking wildly to get past the chaos and confusion under the decaying facades of Mughal-time and Art-Deco structures made uglier by the hoardings and billboards of umpteen commercial outlets.

In 1911, King George V announced that the capital of British India was to be shifted away from Calcutta, at an extravagant Delhi Durbar held in what is now Coronation Park next to Nirankari Sarovar in north Delhi. The monarch had desired that a new capital—called New Delhi— be built, one that would be contiguous with the Mughal city of Shahjahanabad. His wish, however, was never fulfilled as the team of architects found the area in north Delhi marshy and full of swamps. They instead suggested that the area around Raisina and Malcha be developed into the new capital.

But, even as New Delhi arose in the 1930s, Shahjahanabad remained the main shopping area for Indians living in the city, while the upcoming Connaught Place would have stores selling imported food and wines to English administrators. New Delhi looked antiseptic and devoid of colour and life. My mother, now in her mid eighties, recalls visiting Chandni Chowk with her own mother in the early 1940s, travelling from Pusa (where her father was heading the Imperial Agriculture Research Institute), to shop for clothes and groceries. “The driver was instructed to get back to Pusa before sundown as the area between Old Delhi and Pusa was a jungle where jackals and hyenas lived,” she recollects.

The end of Mughal rule hastened the end of Shahjahanabad in many ways. ‘Dilli’, the capital of Mughal India, would soon witness a brutal transformation that would not just change its demographics but also its geography, social norms, language and cuisine. In a sense, the victory of the British East India Company signalled the end of the primacy of what has come to be known as Old Delhi or ‘Purani Dilli’ today. For over 200 years before this change, the Qila (renamed the Red Fort) and the neighbouring areas that housed both Mughal nobility and ordinary citizens, together with the kilometre-long Chandni Chowk from the Qila to Fatehpuri Masjid, had been the veritable centre of India.

The capture of Delhi in 1858 led to Shahjahanabad and Chandni Chowk being changed forever. The city was torn apart by the British army and its administrators as they unleashed a vendetta against the people. Makeshift gallows in front of what is today the Sis Ganj Gurudwara were set up, and large numbers of men, both Hindu and Muslim, were hanged for their ‘complicity’ in the uprising of 1857. Muslims were hounded out of the Mughal city and their properties looted and destroyed, while many mosques were ruined. A few that were spared—like the Fatehpuri Masjid— were sold off to Hindu traders like Lala Chunna Mal.

The exodus of a large number of Muslims from the Chandni Chowk and Chawri Bazar areas saw Hindu traders buying and then occupying their properties. In the early decades of the 20th century, a loan waiver announced by the government of undivided Punjab led many Hindu traders to settle down here as well.

According to official records, most of the British officers stationed at the Red Fort garrison sought early retirement after this posting. Being posted at the Qila meant that treasures like royal turbans, illustrated manuscripts, royal furniture and the like were all up for grabs; and officers and soldiers had the entire fort and its palaces at their mercy. After the Red Fort was pillaged and royal artefacts looted, auctions were held for days on end in what is called Meena Bazar today.

The palace of the last Mughal ruler, Bahadur Shah Zafar, was demolished along with several other buildings; and in its place was built an army barracks, which, until recently, was occupied by Indian Army soldiers. A visitor to the Red Fort today will see standalone buildings that remain disconnected and offer little idea of what a thriving royal city was like. Few know that not a single piece of paper was left by the British that either mapped or located the royal palaces inside. Even the Diwan-i-Khas, where Mughal emperors once sat on the Peacock Throne and presided over an empire that included most of modern South Asia, was first converted into a courtroom for the trial of Zafar, and later, to denigrate the memory of Mughals, converted into an Officer’s Mess. Sepia tinted photographs of the period chronicle the sad decline of the Fort.

Even outside the fort, the character of Shahjahanabad was changed when the minarets of the mosques that dotted the skyline were pulled down one after the other. Some overzealous Englishmen were keen to pull down the Jama Masjid as well, to build a Christian cathedral in its place. While Muslims remained persona grata in the area for over a decade after 1857, Englishmen themselves fancied the vast courtyards of Jama Masjid as a probable party area, holding frequent evening parties and balls.

Documents well preserved in a little known building of Delhi’s Archives reveal the city redevelopment that the British had planned. Official orders of the Delhi Commissioner dating to middle of 1858 state that Darya Ganj and Dariba (areas containing silverware shops) were drastically altered. Shops and encroachments were cleared to make way for roads. In fact, the road in front of the Red Fort was created after the capture of Delhi. Soon, the road connecting the Red Fort to Fatehpuri Masjid—now called Chandni Chowk—was targeted for a makeover. Divided into four parts (Urdu Bazar, Phool Mandi, Jauhari Bazar and Chandni Chowk), the area boasted single storeyed shops on either side of a tree lined water channel. This is the place where Mughal nobles went to shop in the evenings, and according to an English traveller writing before 1857, cheetahs and handsome boys were on offer for nobles to buy.

The water channel was covered up to ease movement of traffic, while the octagonal pond was demolished. In its place came up a clock tower and, in true Victorian style, a railway station that took shape on the ruins of a royal garden right next to the Red Fort. The beginning of the Calcutta-Kalka train service in 1861 and the building of a railway station changed the skyline and look of the medieval city.

The introduction of trams soon saw tracks criss-crossing what we know as Chandni Chowk. Gurbaksh Kaur, now in her eighties, recalls the excitement among students as they hopped onto modern trams and visited Paranthe Wali Gali to tuck into stuffed paranthas. Two of the eateries still selling paranthas are over a hundred years old and find prominent space in tourist brochures, but this trip is not for the faint hearted as the rundown look of the area is hardly inviting.

Over the years, Chandni Chowk and other historic areas have been allowed to degenerate. Unlike many old cities across the globe where both government and local communities join hands to preserve and conserve the past, there has been no such success here. The Shahjahanabad redevelopment plan needs to ‘think local’, and municipal agencies need to be made accountable. After all, basic cleaning services do not require any parliamentary or executive decision. Shopkeepers have to be made responsible for waste disposal, pavements have to be repaired and made user-friendly. Unlike VIP areas controlled by the NDMC, which, flush with funds, re-lays pavements regularly to justify its budget, Chandni Chowk has quite possibly never seen basic repair work take place despite tens of thousands of people visiting and living in the area.

Prime Minister Narendra Modi has rightly identified garbage disposal as a major challenge, and the Government has promised to take steps to boost tourism. Chandni Chowk, visited by every tourist entering Delhi, could be the place to start with. Like in the UK, India needs stringent laws on heritage conservation and the creation of a single window agency for locals who need to rebuild in heritage areas. The exteriors of buildings in Chandni Chowk need to be restored and protected; and for this, any rebuilding or renovation required should be allowed within reason, in keeping with the requirements of modern life. This has been successfully undertaken in historic London. In this manner, the historic nature of the area and its buildings would be preserved while letting people living within it create new spaces.

The absence of public toilets needs to be addressed as well. Many a foreign tourist can be seen clicking away at men lining up outside a rundown urinal at Chandni Chowk where little is hidden from public view.

At the same time, surely no Delhiwala or Indian proud of her heritage would like the more-than-300-year-old city of Shahjahanabad to be replaced by hideous multi-storeyed commercial buildings. Government intervention and strong accountability are urgently needed. Excuses of population density and pressure from the local business community cannot be bandied about by corrupt, inefficient and incompetent government agencies while an important slice of India’s heritage is destroyed.

(Sunil Raman is a freelance journalist, a heritage specialist and co-author of Delhi Durbar 1911: The Complete Story)