Nitish’s victory has plenty for parties across the political spectrum to ponder. 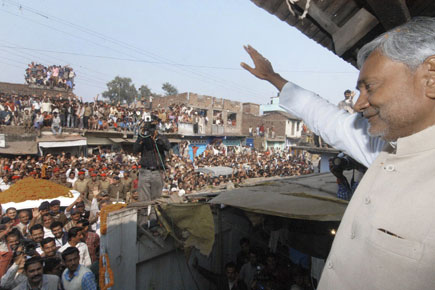 Nitish’s victory has plenty for parties across the political spectrum to ponder.


Nitish’s victory has plenty for parties across the political spectrum to ponder.

The hurly burly’s done, and the Bihar election’s been lost and won. More won than lost, though, because the poll results speak of a positive vote for the incumbent Nitish Kumar government. Not only has the Janata Dal United-Bharatiya Janata Party (JDU-BJP) combine returned to power, it has come back with a clearer mandate. The challengers—Lalu Prasad’s Rashtriya Janata Dal (RJD) and Ram Vilas Paswan’s Lok Janshakti Party (LJP), which fought together in an attempt to oust the Nitish government, and the Congress, which contested all 243 seats and was hoping to play kingmaker—have fared worse than they did last time round. Yet, the losers get to take home lessons on the way Indian politics is changing.

First and foremost, you cannot take anti-incumbency for granted. And if the incumbent government is a better alternative than what the challengers offer, voters will not vote it out just for the sake of change. Change for the better is what the electorate sought in the previous Assembly election, when it got rid of the Lalu-Rabri raj. Nitish Kumar formed his government on the promise of that change, and once in the saddle, he did actually set out to change things. In the last five years, Bihar’s government has given the state a semblance of governability. Bihar still doesn’t have power, nor much industry, but it surely isn’t Lalu-land anymore. Law and order is back. Not only are there roads, which were non-existent during 15 years of Lalu’s regime, you can actually move freely on these roads. Sending children to school was incentivised during Nitish’s rule through free bicycles and uniforms, and enrollments went up. The state’s economic growth has been higher than the national average over the last five years. Even Narendra Modi, who Nitish forced the BJP to keep out of the campaign, held a press conference in Ahmedabad to congratulate Nitish Kumar, dubbing the win, “a win for development and governance.” There is a lesson for the BJP here as well. It has fared better than it did in the last election by keeping Hindutva out of the election rhetoric and playing junior partner to the JD-U in the state. So that’s the second lesson: a BJP for development is welcome, a BJP for Hindutva is not. Therefore, we can safely bury the Mandal-Mandir phase of electoral politics. Details of who voted where will emerge later, but Bihar 2010 may have succeeded in breaking the way traditional vote banks work. Lalu can no longer claim that the MY (Muslim-Yadav) combination “is my vote bank”. Neither can Paswan claim to lord over Dalit votes.
It is not as if caste will disappear with this election. Nitish Kumar too worked with this clarity in mind. He managed to create new constituencies for himself through positive discrimination during his tenure. He worked for women, Extremely Backward Castes and Mahadalits (all Dalit castes in Bihar except Paswans) and was able to wean away voters from traditional vote banks that supposedly belonged to others.

The Congress has finished at the bottom of the tally. In its campaign, it set out to offer a post Nitish-era. It sold to the people of Bihar the idea of how the party can be an improvement on what Nitish’s rule has to offer, without anything to show on the ground for it. As a result, it has put up its worst show ever in the state. It is naïve, however, to suggest that the Congress applied the same formula to the Bihar 2010 polls that it wants to in Uttar Pradesh two years from now. Clearly, in Bihar, the party has invested in the future, giving out nearly half its tickets to candidates below the age of 40. But the party also must realise that if it wants a future in the state, it will have to start by working on its present. Rahul Gandhi cannot be the party’s face in a state election unless he himself is running for chief minister. The Congress had no local face in the election. As soon as the election results started pouring in, the Congress went on the backfoot to defend its leadership. General Secretary in charge of the state Mukul Wasnik, in his first media comments after the results, was more concerned with profusely thanking the party president and Rahul Gandhi for addressing rallies in Bihar than admitting that the Central leadership cannot fill in for a weak or non-existent state leadership. Bihar’s results day has seen musical chairs being played with chief ministerial seats in two other states: in Karnataka, the BJP failed to get BS Yeddyurappa to quit as CM, while the Congress got Andhra Chief Minister K Rosaiah to quit, which could help accommodate caste aspirations in the state. The Congress needs stronger regional leaders, and the BJP a stronger central leadership. But before that, they need to learn their lessons from Bihar.