Open’s coverage of the anti-corruption movement

Watch this space to catch up with Open’s coverage on the Lokpal Bill debate and the anti-corruption movement. 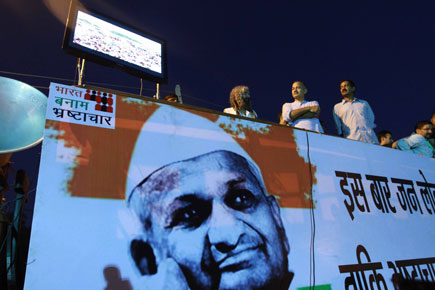 Watch this space to catch up with Open’s coverage on the Lokpal Bill debate and the anti-corruption movement.

“Put the Lokpal Bill to referendum”

Stuck with the Mascot

Not Your Textbook Saint

Spare Us the Gandhian Halo

What Lies beyond Anna’s Fast

Keep the candles ready for yet another satyagraha, this time by Baba Ramdev

Ideas do not count for much. You might hate this but you better lump it. For it really is the will of the people. Of those who count, not the ones we hear in TV studios.

This Rage will Change Our Politics

Hazare and Ramdev are comic sideshows. The real target is the pervasive greed this Congress regime is happy to condone

What Gandhi would tell our serial fasters

The Beginning of the End

At every step, senior Congress leaders have been outmanoeuvred by Anna’s aides

Everybody Loves a Good Protest

Dissent is a casualty at the Anna show where his rainbow coalition of supporters eats, drinks and makes protest before the camera

By misdirecting public anger against corruption, Anna’s aides are advocating contempt for the Constitution

The Story of Their Experiments with Gandhi

Why the Sangh Loves Anna

What Anna Hazare uttered, Raju Parulekar wrote. So when Anna accused him of misusing the blog, he was stunned. Now, he speaks to Open

Anatomy of an Imperfect Law

The Team Anna-Government confrontation is set to continue beyond this Bill. Meanwhile, they both need to acknowledge the blame they deserve for its drawbacks

The Lokpal and You

The Lokpal has been left in the lurch. Who is to blame? Just about everybody who claimed to be in the Bill’s favour