Oommen Chandy, the Kerala Chief Minister with a cultivated Mr Clean image, may not recover from the latest twist to the sleaze-and-bribery scam 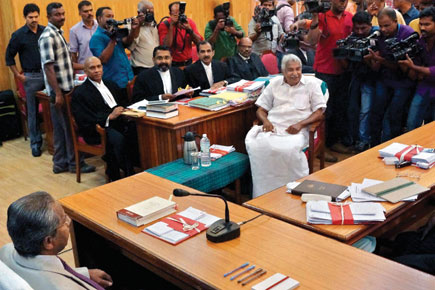 The deposition on 27 January before a judicial commission by Saritha S Nair, the prime accused in the ‘solar scam’ whose name evokes laughter, intrigue and gender prejudices thanks to her alleged links to powerful ruling politicians in the state, has put Chief Minister Oommen Chandy, the 72-year-old survivor of myriad political maelstroms, in a bad spot. A day later, Chandy finds himself staring at the possibility of having to step down, with a vigilance court ordering that an FIR be filed against him over the bribery allegations made by Nair.

Nair had told the ‘solar’ commission that she had given a bribe of Rs 1.9 crore to Chandy through his personal aides in return for favours to set up projects in the state. The plot thickened after audiotapes showed that Thampanoor Ravi, a Chandy loyalist and Congress leader, had briefed Nair on Tuesday to protect the Chief Minister from the commission’s volley of questions. Ravi confirmed the veracity of his voice in the leaked tape, but tried, rather unsuccessfully, to deny that he did so at the behest of Chandy. In her latest disclosure, Nair has also claimed that she had paid a bribe of Rs 40 lakh to Kerala’s power minister Aryadan Mohammed. Though her detractors, mostly former chums, hasten to point to her poor credibility—because she has a history of duping investors— her push became a shove for the state’s Congress-led United Democratic Front (UDF) government, which is grappling, among other troubles with internecine wranglings, allegations of corruption and a lack of public trust.

Chandy has denied any wrongdoing. In his characteristic style, he has blamed the opposition for being hand-in-glove with liquor barons upset by new policies, and spoken of conspiracy theories by former allies that have snapped ties with the UDF over the past year.

Kerala, which goes to the polls in a few months, is crucial to the Congress in the national scheme of things—it is among the few states where the party is either in power or in good shape as an organisation. The political setback here has hurt the Grand Old Party as a whole. The party’s central leadership would have no option other than to ask Chandy to quit if it applies the doctrine of precedent: at least one minister of the UDF cabinet has had to quit in similar circumstances.

The latest blow was preceded by a raft of rumours from officials and police officers of scurrilous details of Nair’s links with top politicians who had reportedly connived at her crimes in exchange for money, other favours or both. Nair, an engineering college drop-out who later became a businesswoman, was a director at Team Solar Renewable Energy Solutions Pvt Ltd, a fraudulent company that duped investors to the tune of several crores of rupees. Her arrest in June 2013 revealed some dramatic turns in her life, marked, as it was said, by a need to make money at any cost. Police officers soon began to brief journalists with a list of VIPs whom Nair claimed had demanded sexual favours from her. There were state and Central ministers on the list. Chandy’s name also cropped up in cocktail chats. Nair’s partner, Biju Radhakrishnan, went to the extent of publicly alleging that the Chief Minister had intimate relations with her.

In March 2014, Nair had levelled rape charges against AP Abdullakkutty, a Congress MLA from Kannur. In April 2015, she made an attempt to throw shameful light on other politicians for one thing or another. All this, observers alleged at the time, was part of an elaborate scheme hatched in connivance with Chandy to sully reputations for political purposes. Now that the solar fraud bribery scandal has reached the Chief Minister’s own doorstep, some believe that she was fed up of a ‘thankless job’ and has decided to get back.

After Chandy’s denial of any involvement, Nair has said she is ready to undergo a lie detector test, which the Chief Minister has refused. He is said to be too busy, and has apparently not even had time to deal with the resignation letter handed over by state excise minister K Babu a couple of days earlier. He is under fire for the bar-owner bribery scandal.

In her deposition to the judicial commission, Nair said she handed over Rs 1.1 crore, at the instance of Jikkumon Jacob, to Thomas Kuruvila on 27 December 2012 at Chandni Chowk in Delhi. Another Rs 80 lakh, she alleges, was handed over at Thiruvananthapuram 14 days prior to her arrest. According to her, she was told by Jacob that the Chief Minister had demanded Rs 7 crore to let her solar project go ahead. She had met Chandy for the first time in June 2011 with a proposal to provide solar panels to all buildings with more than 2,500 sq ft floor space. As suggested by him, she said, she met Mohammed, who demanded Rs 2 crore, which was negotiated down to Rs 1 crore. Though she paid the power minister Rs 40 lakh, she said she had received no help and her project could make no headway. She claimed she had been subject to character assassination and mental torture, and after her release from jail had made several attempts to get the money back, to no avail. “I am fed up. They did not keep their word, did not give the money back. I have been portrayed as a street sex worker, a person with no integrity; hence I decided to disclose everything,” Nair told the media after she came out of the chamber of the commission.

Chandy has always been well known for his political acumen, especially his ability to foresee trouble, and his uncanny ability to turn the tide in his favour, which has involved shaking off potential threats. Even CPM comrades have marvelled at what all he could pull off. After the UDF’s photo-finish win more than four years ago, running a government with a slight majority of 72 seats in the Assembly (as opposed to the LDF’s 68) was going to be taxing, but Chandy appeared to have what it took. In March 2012, for example, he engineered a switchover from the CPM—that of R Selvaraj—that turned the ruling alliance’s ratio in the Assembly to a relatively secure 73 to 67.

Then came the infamous solar scam, which grabbed primetime on news TV in Kerala, given its mix of corruption and sex. Team Solar Renewable Energy Solutions Pvt Ltd allegedly collected large sums of money from investors on false promises of making them shareholders in the business and from customers on solar energy installation deals that were never fulfilled. Complaints of fraud were lodged against her company and her. The links with ministers and other politicians began to surface after that.

In August 2012, the CPM demanded the resignation of the Chief Minister for the scandal, with large numbers swarming to the secretariat. Chandy announced a judicial enquiry and the opposition called off the protest. Soon after this came the rebellion of the UDF chief whip PC George, and this had its own repercussions within the ruling formation.

In the midst of all this, Chandy got little time to sit back and take a deep breath. If the solar scandal is staring him in the face now, some while ago it was the bar bribery case. The closing down of all liquor- serving bars in Kerala except those at five- star hotels was seen from the start as a clever move by the Chief Minister to defeat Kerala Pradesh Congress Committee President VM Sudheeran’s efforts to court popularity among a section of voters by denouncing the consumption of alcohol. Sudheeeran had wanted only some bars closed for failing to meet standards, but Chandy trumped this by closing all except those at five-stars. After the closure, Biju Ramesh, working president of the state’s Bar Owners Association, alleged that KM Mani, the state’s then finance minister, had been bribed for certain favours. This led to the latter’s resignation.

In December 2015, Nair’s partner Radhakrishnan told the judicial commission investigating the solar scam that he had a CD as evidence of the Chief Minister’s sexual relationship with Nair. He sought ten hours to produce this CD, and the rest of the day was one of high drama—at the end of which no such disc was found. The episode of the non-existent CD went in Chandy’s favour, and the Chief Minister gave the commission a 14-hour deposition of his own, virtually unheard of for the top leader of any state in India.

Now, as Kerala waits for Chandy’s next move, his credibility is running thin. At the beginning of the solar controversy, he had said that he had not even met Nair, which later proved to be a lie. This time, he may find it even harder getting away. Experts in law suggest that the bribery allegations against him have striking parallels with similar ones levelled against KM Mani. If he was forced to resign, they ask, why not the Chief Minister himself?

Chandy knows only too well that it is a battle for survival not just for the Congress but also the opposition CPM, which is moving heaven and earth to return to power in the state in its last- ditch battle to stay relevant as a national electoral force following its humiliating rout in West Bengal at the hands of Mamata Banerjee. As a shrewd leader who had once managed the impossible— the political overthrow of Congress patriarch and long-time Chief Minister K Karunakaran, who was considered unbeatable, in the mid-90s—Chandy now faces his biggest political challenge. What is interesting is that he betrays none of the shame or discomfort one expects of a politician under such circumstances. Perhaps he is at his deceptive best.