Of Discrimination and Flying Phones

What has been missing in the speeches of Rahul Gandhi, Narendra Modi and Arvind Kejriwal is levity. The man who can teach them that is Tamil Nadu filmstar-turned-politician Vijaykanth, a DMDK leader 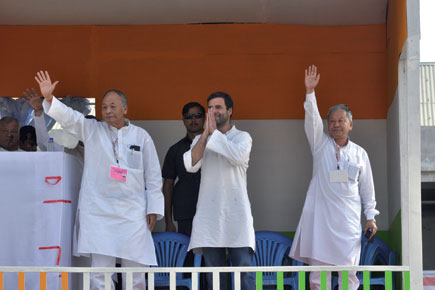 What has been missing in the speeches of Rahul Gandhi, Narendra Modi and Arvind Kejriwal is levity. The man who can teach them that is Vijaykanth, a DMDK leader

On Wednesday, when Congress leader Rahul Gandhi spoke at a rally in Manipur, he made sure to advertise his legacy and club it with an appeal to the region’s people on a subject they are sensitive about—discrimination by the rest of India.

He said: “In 1972, Indira Gandhi came here and participated in the function that gave you statehood. And in that function she said that Manipur is a real gem and we wish that Manipur will shine like a gem and impart beauty to the whole of India. And that statement goes very deep into how Indira Gandhiji and the Congress party think about Manipur… Every single person, regardless of where he comes from, which state he belongs to, what colour he is, what religion he follows, is a gem for this country. We believe that every single idea that an Indian person has adds to the beauty of this country.”

Discrimination and tolerance happen to be especially pertinent topics now in the Northeast, after the recent killing of a student, Nido Tania, in Delhi. A day earlier, that was also the theme of Gandhi’s speech in Arunachal Pradesh, Nido’s home state, to indulge in some Opposition bashing. He said: “Why did Nido die? Because of the thought that this country belongs to different people and there must be no place for the people of the Northeast in Delhi. This is the thought of the opposition parties which makes people fight with one another. Our thought is that everyone needs to walk ahead together.”

Some days earlier, in a speech in Sambalpur, Odisha, BJP prime ministerial candidate Narendra Modi also had a few things to say about discrimination, but of a different kind—by the Congress against people in BJP ruled states. And what he used to highlight it was the recent hailstorm that caused extensive damage to crops in Madhya Pradesh.

He said: “I have never seen Shivraj Singh Chouhan so worried. Yesterday when we had a meeting of the Parliamentary Board, Shivrajji said he was extremely troubled by the situation but the Delhi government is not worried. Farmers were dying, hailstones were falling but the Prime Minister, his leaders, his shehzaade, are not concerned with Madhya Pradesh farmers. They don’t think of them as their own. Why? Because they made a government of the BJP. They think, ‘let the farmers die, they didn’t give vote for us’.”

When it comes to the Aam Aadmi Party, ‘Stop Modi’ is a strategy to pitch itself as a viable Opposition at a national level. On Sunday, 16 March, soon after it was announced that Modi would contest from Varanasi, Arvind Kejriwal said in a speech in Bangalore: “We have to defeat both Congress and BJP and we have to defeat them in these elections. How do you defeat them? First you defeat their top leaders, put good candidates against their top leaders.”

He said the party had asked him to contest against Modi but he would first ask the people of Varanasi. He added, “I will go to Varanasi. On 23 [March] we will do a rally; let all people in the country come to Varanasi. The party has given me a ticket but it does not mean anything. When the people of the country give me a ticket, then I will contest against Narendra Modi. Whatever the people of Varanasi say I will listen to it. If they give me the responsibility then I will accept it.” Going by AAP’s previous experiences with referendums, it is always an answer already known.

What is missing in the speeches of all three—Modi, Gandhi and Kejriwal—is levity. The man who can teach them that is Tamil Nadu film star turned politician, Vijaykanth. The Hindu reported that at a rally, the DMDK leader chose to comment on Tamil Nadu Chief Minister J Jayalalithaa’s governance thus: “They say change has come. But where is the change? When I was coming to this spot, the roads were so bad that the cellphone in my pocket jumped out and went into the next person’s pocket.”