Now for the Final Act

The DMK’s succession drama is fast reaching a conclusion 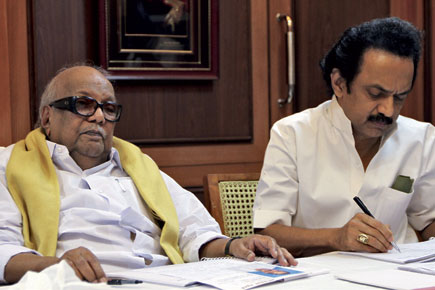 The DMK’s succession drama is fast reaching a conclusion


It is about time Tamil Nadu’s former Chief Minister M Karunanidhi put a stop to the vexed crisis of succession within his party, the Dravida Munnettra Kazhagam (DMK), over which he grandly presides as a patriarch given to periodic whims about which son to favour. His latest flip-flop has stirred some excitement but failed to enthuse party cadres. At 89, he is the oldest political leader in the country now, and his younger son and heir apparent, MK Stalin, the party’s general secretary in-charge of the youth wing, is set to turn 60 this year. For many, the succession issue was settled long ago, for the patriarch has groomed Stalin for two decades to take his place. But this is an eventuality that his elder son and Union Minister MK Alagiri, who entered politics later, is unwilling to accept. This has infused the issue with drama, vitriol and even threats within Karunanidhi’s family—more engaging, some feel, than some of the man’s own work as a film scriptwriter, as he was in his younger days.

Earlier this week, Karunanidhi asked partymen to ‘remember’ Stalin after him. This rekindled the succession war between the Brothers MK. After the initial excitement that the old man had finally named his successor, a caustic remark by Alagiri that “the DMK is not a religious order [for anyone] to anoint a successor” led Karunanidhi to perform some verbal acrobatics by way of an explanation: he had only meant that Stalin would take his legacy forward, he said, as far as the party’s social legacy was concerned. But then, on another occasion, the patriarch seemed surer about backing Stalin, saying he would second his name once someone else proposes it for party president in the next party elections. When a sympathetic journalist asked him what he would do if his elder son contested the polls for DMK president, an emotional Karunanidhi dramatically said: “I don’t know whether I would be still alive then.”

These party polls—for other senior posts as well—are expected to be held in the third quarter of this year. “We are planning to hold the polls in October or November. The dates have not been finalised yet,” says a DMK office bearer. The process for electing lower-level office-bearers has just started, a reason perhaps that Karunanidhi drew attention to his preference of Stalin as his successor. An earlier effort, while he was CM, to name his younger son was met with stiff resistance by Alagiri and other family members. “Karunanidhi wanted Stalin to lead the party during the May 2011 Assembly polls, but the plan was put off after a succession war and the 2G scam heat that the party was facing,” says a senior DMK leader.

According to writer and theatre activist Gnani Sankaran, a leadership change is long overdue. “The DMK was considered a party of the youth when it was floated in 1959. Anna (CN Annadurai) was only 40 years old then. All second- and third-line leaders were between 30 and 40. Karunanidhi himself became CM when he was only 44, but clung on to party posts.”

Since succession is now a family tussle, why does the party retain the pretence of being a democratic rather than dynastic party? “It is a mix of dynasty and democracy,” says Sankaran, “Several children of top senior leaders came into the party as teenagers and grew with it, including Stalin. In fact, Alagiri, Kanimozhi and Dayanidhi Maran were the ones who were suddenly thrust upon the party and promoted to posts without any solid grassroots political work. Stalin had been a party worker since his student days.”

A party insider says the DMK lost its democratic veneer three decades ago when leaders such as Karunanidhi, Anbhazhagan and Arcot Veerasami were elected unopposed: “Formal elections were held, but not one would file nominations to contest against them. But there have always been bitter elections for lower positions…”

Alagiri’s equation with his father has been stormy ever since it became clear Stalin was his heir-apparent. In fact, Alagiri’s anti-Stalin postures in public had so irritated Karunanidhi that he even disowned him and ordered him out of the house. His mother Dayalu Ammal, Karunanidhi’s second wife, averted a family split by brokering a deal under which Alagiri was packed off to Madurai to strengthen the DMK in the southern districts. Tensions ran high here too. Alagiri’s supporters were alleged to have killed a Stalin supporter. Alagiri too was jailed as an accused in this case.

According to sources, Karunanidhi once told Alagiri: “You went to jail on a murder charge, but my younger son Stalin went to jail for Tamil pride [during the Emergency].” Alagiri still remains his mother’s favourite, and once even had the support of Rajathi Ammal, Karunanidhi’s third wife (Kanimozhi’s mother). But this was seen as just a tactical alliance against the Maran branch of the wider family, and it snapped after Kanimozhi was jailed in the 2G scam.

Today, Alagiri may have little other than his mother’s support to count on. The party at large is likely to side with Stalin. Even local DMK leaders in the southern districts have switched loyalty to the younger son. “Alagiri can only surrender,” says Sankaran, who thinks it is time the issue is settled in Stalin’s favour.