No Right to Eat

Government schemes and ration cards notwithstanding, even subsidised food is a luxury that many can’t afford. 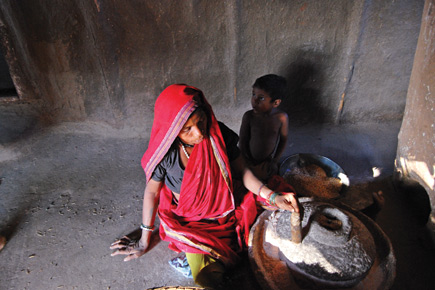 Government schemes notwithstanding, even subsidised food is a luxury that many can’t afford.


When 25-year-old Sona tells you with utmost sincerity that her baby boy is malnourished because when he was in her womb, the shadow of a pregnant woman placing a pot of water on another pregnant woman’s head fell on her, you pause, unsure if you heard her correctly. But if you know Korku tribals, this woman—rocking her baby in front of you, talking nonchalantly about spells, curses and omens—won’t surprise you.

You are in Maathnee village, amidst the jungles of southern Madhya Pradesh bordering Maharashtra’s Betul district, 100 km from Khandwa. Sona, and the 100 odd families here are Korku—traditionally a hunting and gathering tribe—known for their superstitious beliefs, black magic solutions to problems of everyday life, and extreme poverty.

Hariram, two-and-a-half-years old, wails from the moment he hears me at the door. Now, an hour later, he still hasn’t stopped. “He thinks you are a doctor and that you are here to give him an injection,” smiles Sona, gently slapping him on his cheek. Hariram has had more than his share of injections, visits to private doctors, government hospitals and the village soothsayer (who tied charms around his neck last week, promising that his ‘thinning disease’ would soon end).

Two-year-old Hariram looks like a normal child at first. On closer observation: his skin is a pale yellow, hair limp and stomach bulging. He has just learnt to walk, though most babies walk before they are a year old. He weighs barely 8.5 kg, while a boy his age should ideally be 10.5 kg. ‘Gambhir Kam Vajan’, or severely underweight, screams WHO’s growth chart when his weight and age are plotted on its orange-coloured band.

Last year, Sona and three other women from Maathnee were admitted with their babies to the district’s Nutrition Rehabilitation Centre (NRC) in Khandwa, which is meant for severely acutely malnourished children. Spandan, an NGO working to eradicate malnutrition in Khandwa as part of the Right to Food Campaign in Madhya Pradesh, transported them to the NRC, a four-hour drive away.

The women dislike going there simply because they have never travelled so far by themselves. “We had to literally catch them and put them inside the van like one would catch prisoners,” recall Seema and Prakash, founders of Spandan. Sona and Hariram stayed there for 14 days, were fed a monitored, nutrition-packed diet, and treated for complications like diarrhoea and dehydration, which aggravate malnutrition.

But ask Sona about the stay, and she says, “I hated it. They all speak Hindi and we speak Korku. I couldn’t understand them.” She adds as an afterthought, “But they took good care of him.” Hariram’s recovery, like that of the other children, lasted briefly. After coming home, he slipped back into his old routine of eating an odd roti—not out of choice, but out of sheer compulsion. Korku children can’t afford to be picky about food. It’s either a cold wheat or jowar roti with a green chilli, some rice with potatoes, or nothing at all. Toor dal, a lentil, is made only in the summer because they harvest it before season.

Korku food habits have changed dramatically over the last few years because of the change in their cultivation patterns. “Earlier, every Korku family would cultivate and eat kodo and kutki, local millets, known to have high nutritional value. Now they grow soyabean, a cash crop. This has directly impacted their calorie intake,” says Prakash. This explains why in Maathnee alone, every second house has a severely malnourished child, weakly suckling a mother’s breast.

Sona’s husband Ratiram, along with his parents and two brothers, owns five acres of land where they have cultivated soyabean, red rice, jowar and wheat. Soyabean yields six quintals, each quintal selling for Rs 2,000. Each year, Ratiram keeps one quintal as seed and sells the rest, earning Rs 10,000. With the exception of soyabean, all his harvest is for the family’s consumption. Narega, or what has been rechristened Mahatma Gandhi Rural Employment Guarantee Scheme, gave Ratiram only 14 man days of labour, which means Rs 1,400 for an entire year. Ratiram earns less than Rs 12,000 in an average year, or Rs 33 a day to support a joint family, and yet, the state government doesn’t seem to think that he is poor enough.

He has an APL or above poverty line ration card, which entitles him to only 10 kg wheat and 3 litres of kerosene at subsidised prices. Understandably, his ration book is empty. “It’s expensive… So why waste money on ration when we need it for other things like healthcare for our son?” asks his wife. It’s a vicious cycle. Prakash has an important point to make, “The Madhya Pradesh government must classify Korkus as a ‘nutritionally vulnerable tribe’ and entitle each family to an Antyoday ration card that allows them 35 kg of food grains at Rs 2 per kg.”

Four kilometres away from Hariram’s house, Maathnee’s anganwadi is slowly filling up with wide-eyed tribal children bringing their empty bowls waiting to be filled with a bland khichdi, a rice and dal mix. Most children are from the Korku and Gond tribes. The anganwadi is a village-level day care centre for children up to six years of age that has been established by the state’s Integrated Child Development Scheme. But the anganwadi’s location is such that Hariram and the children from his side of the village have to walk a long way to reach it. By the Supreme Court’s orders, a village should have one anganwadi for every 40 houses, and if the children are unable to make it for any reason—such as caste discrimination or physical distance—another centre may be opened. But Maathnee has only one anganwadi and while packets of supplementary nutrition and daily lunch are given at the anganwadi, only half the malnourished stomachs are fed. The rest live the lesser life.

Victor Aguayo, chief, child nutrition and development, Unicef India, says, “If a severely acutely malnourished child is not brought back to normalcy within two years, the damage it does to a child’s brain development and physical growth is irreversible. Most often, people identify physical growth as the only indicator of nutrition, but a severely malnourished child suffering from a prolonged iron or iodine deficiency will have devastating consequences, making him mentally impaired for life.”

Khandwa district was a hotspot for malnutrition in 2008. Khalwa block in Khandwa, 70 percent of whose population is Korku, saw 62 malnutrition-related deaths in a span of just four months that year. At the moment, according to the Ministry of Women and Child Development in Madhya Pradesh, 39 per cent of Khandwa’s children are malnourished. Statewide, the Korku population is seeing a rapid decline. While the 1951 census had showed their population growing at 31 per cent, their present growth rate (according to the 2001 census) is 19 per cent. They are still one of the many tribal communities worst affected by malnutrition because of their extreme poverty. “It is not fully under control I must admit, but things are getting better. The ration supply has been strengthened. Eradicating malnutrition needs continuous effort and we have to keep at it. We have got plenty of funds and plenty of schemes to work out a solution,” says SB Singh, collector, Khandwa district.

Back in Maathnee, darkness creeps into the village like spilt ink into water. The cattle are returning home as the sound of their hooves and clanging bells around their necks echo in the wind. It is cold, and a fire is being lit. Slowly, men squat around the fire, unplugging their beedis from behind their ears. In a few moments, it is pitch dark. No bijli (electricity). No sadak (road). Very little paani (water). Sacks of soyabean stand in each house, ready to be sold in the market. It occurs to you that you were taught in school about soyabean being a protein-rich food. The men laugh when asked if they have tried eating it. “No one here has tasted it before. It gives us money, so we sell it,” says Sukhlal, a resident cultivating two acres of soyabean. Tomorrow morning, bags of nutrition will be piled on bullock carts and drained out of Maathnee. For the children, it will be another day to commemorate their battle to stay alive.

(The writer is a development journalist and a National Foundation for India fellow.)