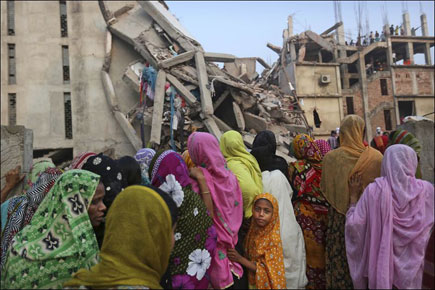 
A few years ago, when I was in Dhaka working for a newspaper, its editor Mahbubul Alam, one-time press advisor to Mujibur Rahman, and one of Bangladesh’s most respected journalists, sat me down and asked me why Bangladesh doesn’t find space in Indian media; why our media is obsessed with Pakistan. I saw his point. While news from here, especially from our part of Bengal and Bollywood, figured actively in Dhaka, there was little or no evidence of Bangladesh’s presence in our media.

Alam’s observation came back to me once again in the wake of the eight-storey garment factory collapse in a Dhaka suburb on 24 April, which has already accounted for more than 400 factory worker deaths. The tragedy failed to find traction in the Indian media—relegated to the inside pages of newspapers, and not even found ‘newsworthy’ enough for television news tickers. Even The Times of India, which had kick-started a campaign called Maitree Bandhan (bonds of friendship) last year to celebrate our ‘shared history’ with Bangladesh, only gave it measly space on its inside pages—raising the question of whether campaigns like these are purely marketing gimmicks.

The contrast with the Western media can hardly be missed. The tragedy played on the front pages of such distinguished publications as The New York Times and The Guardian and was headlined by the BBC—even news website The Huffington Post featured it on its home page. The NYT, in fact, wrote a stinging editorial criticising not just the Bangladeshi Government for actively thwarting the unionisation of workers, but also global clothing brands such as H&M, Walmart and Gap for not implementing welfare measures.

But this is not the first time. Even the Shahbag Square protests last month calling for the death penalty for sections of the Jamaat-e-Islami leadership, fifth columnists of Yahya’s Khan’s marauding army, were covered only partially, at best, by the Indian media. Similarly, when there was an attempted coup led by Jamaat cronies in Dhaka last year, I was asked by the editor of Headlines Today to line up experts and independent voices. That, I did. Later I learnt, to my chagrin, that the show was dropped on grounds that the cost incurred—a couple of thousand rupees at most—could not be justified by its news value. The same network had earlier despatched two reporters to Libya.

Strange as it may seem, a number of broadcast and print organisations sent their reporters to cover the ‘Arab Spring’ in Libya and Egypt. But they counted pennies when events happened across the border.

How does one explain this? Does the definition of news differ from culture to culture? Is the Arab Spring ‘sexier’ because of the Western media’s sustained sales pitch for it as a digital media-driven revolution marking the end of radical Islam? Why does the factory building collapse make the editorial cut in countries that have little to do with Bangladesh but not in India, which has a shared history with that country? Bangladesh, created on a linguistic basis, stands as an absolute refutation of the ‘two-nation theory’ that split India and Pakistan, which was based on religion. The answer could well lie elsewhere.

Partly, Bangladesh does not register as aspirational to our middle classes. It is India’s poor cousin. It is the ‘face you were afraid to see’, as economist Amit Bhaduri has pointed out in another context, even though Bangladesh has a far superior average life expectancy and gender equality ratio compared with India as a whole, lauded even by Amartya Sen in a recent lecture. For India’s upwardly mobile, 300 million-strong middle class, drooling over the likely entry of Walmart, 380-odd workers dying in Dhaka’s killer sweatshops while stitching clothes for global retailers (like Walmart) is hardly the stuff of news. Instead, the changes in visa norms proposed by Republican Senator Charles Grassley, which would impact only a handful of techies going to the US, has sections of the Indian media frothing at the mouth.

But apart from the nature of middle class aspirations, or perhaps because of it, the Indian State, unlike China, seldom acts like an aspiring global power. Taking one’s neighbours seriously is just the starting point for any country aspiring to a seat at the high table. In June 2010, Sino-Bangladeshi relations got a major boost when Chinese Communist Party (CCP) Vice-president Xin Jingping (now president) visited Dhaka to sign some routine bilateral deals. The AFP played it up with the headline, ‘China’s heir apparent in Bangladesh’, while every CCP mouthpiece—Xinhua, People’s Daily—portrayed the visit as the first by China’s vice-president to any South Asian country. Is it any wonder that China has replaced India as Bangladesh’s main trading partner?

To answer your question Mr Alam: sorry. We, our media included, are insular, too busy fighting our own demons to bother about yours.

The author is a former TV journalist who now teaches at Jamia Millia Islamia, Delhi

(Note: The death toll in the Bangladesh tragedy went up after the article was published in the magazine)