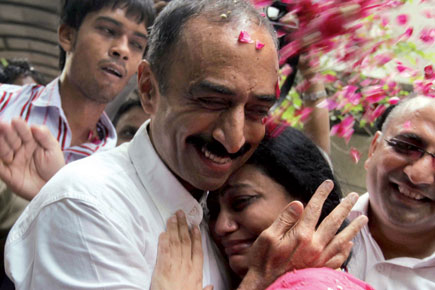 
Q Everybody likes their cushy, middle-class existence. You had a good job in the police. How come you decided to take on a man like Narendra Modi?

Sanjiv Bhatt: You join the Service with a purpose, with passion to do something for the country. You are looking for a job that gives you purpose and action. That is why I chose the police [service]. Now, when you are trained to uphold the Constitution of the land and you see it being subverted completely…

Q Many others see the same, but people react in different ways.

SB: People do react in different ways. People change with time. For me, 2002 (a reference to the massacre of Muslims in Gujarat after the Godhra train killings) was a very different experience. I saw the values I had stood for all my life, the basic tenets of policing, being turned on their head in one go.

Q What changed you after 2002 that made you take a course of action seeking justice for victims of the riots?

SB: Nothing changed me. I decided this was something that should never be allowed to happen anywhere in the country, this kind of systemic subversion of the police, a kind of complete breakdown of the police machinery. Just to forward someone’s agenda, that too an agenda that involves killing people and destroying property. That cannot be allowed.

Q It has been 10 years since the killings of 2002. If you were to do a cost-benefit analysis, where would you stand?

SB: I have gained so much by way of satisfaction. And, yes, I have been doing what I always wanted to do. I still have the same passion, the same fire in the belly as when I joined the police. And I am grateful to God that I have a family that supports me through everything.

Q You have been talking about Narendra Modi’s ‘complicity’ in the riots time and again. But the legal process hasn’t touched him in 10 years.

Q You think there is any material that points to his complicity?

SB: Absolutely. He will not be able to escape the consequences of his actions or inactions. It will take time, yes.

Q Modi has national ambitions. Do you think he will succeed in moving to national politics?

SB: Modi is a very ambitious man. That’s good for him. But I don’t feel his ambitions of leading this nation will ever be realised. I do believe there are a set of secular people in this country who will go the whole hog to ensure he never becomes Prime Minister and gets a chance to subvert the Constitution of this country.

He has the mindset, intentions, conviction and the wherewithal. Yes, he also has the motivation. If he gets a chance, he can definitely do that.

Q So you think he will make a serious bid for the Prime Minister’s job?

SB: He is already. Modi has to go from Gujarat for the simple reason that the chickens are coming home to roost. He has fooled the people of Gujarat for 10 long years and now the skeletons are coming out.

He needs to go somewhere, where he can protect himself from the wrongdoings of so many years. That is possible either if he is in the central government or he is kingmaker at the Centre. If he can’t become the king, he will bid to become kingmaker.

Q Many people believe that the BJP talks about Modi as Prime Minister before an Assembly election to help him beat anti-incumbency. Is that the case?

SB: That’s a very smart strategy of deflecting and giving a subliminal kind of message that being Chief Minister is a cakewalk and we are [now] looking at the Prime Minister’s job. Otherwise, he would have had to answer questions about his 10 years of governance here.

Q I heard you say in a television interview that you were ready to take the political plunge, if necessary.

SB: Tomorrow, if such a situation arises, if I have to take the plunge, I will do that. It doesn’t bother me at all. Nothing bothers me. I don’t think of the consequences of my actions now.

Q But how is that possible. Everyone thinks of consequences.

SB: It sounds a little difficult but it’s not. You do what needs to be done.

Q You could be dismissed from service.

SB: I know. I don’t care much, actually. I will be 49 on December 21. I’ve lived my life, put in 24 years of service already. I’m financially in a comfort zone, where I don’t have to worry about the next five to seven years. I have savings… the moment I give up the [police] job, I will be able to earn for myself.

Q You are being criticised a lot for putting your wife in the electoral fray against Modi.

SB: I don’t need to put her forward; Shweta is a woman with a mind of her own. She’s far more intelligent than me. The evening I was arrested last year, my house was raided twice. My mom’s house and in-laws’ place were also raided. Just to try and terrorise everyone. They thought they could scare us.

Till that day, Shweta had seen the police as an officer’s wife. Now, all of a sudden, she saw the police as agents of coercion. As long as [Modi’s] enmity was with me, it was fine… I knew it then that he’d taken on the wrong person. What I felt then has come true now (with Shweta contesting against Modi).

Q Earlier, you were seen as an independent person, now it appears you were acting at the behest of the Congress since your wife is contesting on a Congress ticket.

SB: That is a very real risk, which I have taken because Modi is a political creature. A creature of politics has to be finished politically. Whatever other [government] officers and I do, we can just slow him down, bog him down in the legal arena.

Ultimately, it’s in the political arena that you have to pin him and finish off his ideology, his politics of hatred. This is the next logical level of the battle.

I was clear that if at all [Shweta] took the plunge, it should be as an Independent. I was being sounded out by many parties because I have friends across the board. First, it was, ‘Will you contest?’; then, ‘Will Shweta contest?’

Keshubhai [Patel, chief of the Gujarat Parivartan Party] was very keen, but I wanted her to contest as an Independent because of these allegations (that Bhatt was acting at the behest of the Congress). But the Congress is an old party and they might have [felt] if they didn’t field a candidate against Modi, it would raise questions that they had given up without a fight. According to Shweta, the Congress was best suited.