It took 26/11 for the establishment to wake up to the needs of modern-day policing. The new training regimen gives hope 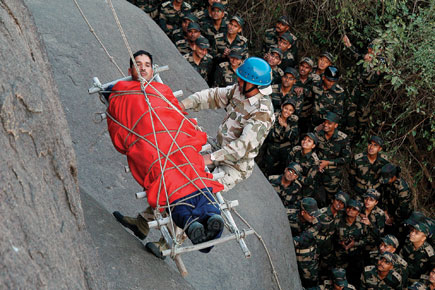 It took 26/11 for the establishment to wake up to the needs of modern-day policing. The new training regimen gives hope


It took 26/11 for the establishment to wake up to the needs of modern-day policing. The new training regimen gives hope

A bunch of trainees dressed in loose clothing march in and get into stance. The instructor begins: “Take the left leg forward, hold, clench the right fist, no, not like that, like this, punch.” It’s a tough half hour for this batch of Indian Police Service probationers at the Sardar Vallabhai Patel National Police Academy (NPA) in Hyderabad. They will soon be sent out into the world. In an earlier era, they would have had to deal with rapists, murderers, petty criminals, riots and the underworld. But now they also have to face terrorists, militants, Maoists and secessionists. Which is why what they are practising is Krav Maga, an Israeli martial art.

Police training in India changed after the 26/11 Mumbai attacks of 2008, where 10 Pakistani terrorists went on a killing spree. The response of the police was to freeze in action, and the military had to be called in. For the Police Academy in Hyderabad, the alma mater for Indian Police Service officers, it was a rude wake-up call. “Indian police had never faced a guerilla-type attack in their urban neighbourhood. We realised that graduates from here are going to face tougher challenges,” says DIG Milind Kanaskar, who oversees the training.

One of the first decisions that P Chidambaram took as the new Union home minister, after the 26/11 attacks, was asking senior Tamil Nadu cadre officer, Director General Vijay Kumar, to remodel the academy.  Kumar was the officer credited with the operation to neutralise forest bandit Veerappan. Chidambaram also visited the campus, and decided to turn the course more physical by introducing new training modules. “Earlier, the historical reference to policing was the Babri Masjid demolition and its communal fallout. Now, it’s the Mumbai attacks,” says DIG Ajay Nand, who was with the NPA till recently. “Terrorism has gone global, and as a leader, the police officer cannot run away. Now, these probationers are being exposed to everything.”

Since the last two batches, the NPA has added several modules, using the experience of police forces across the country and police training manuals from advanced countries. The jungle survival week is the toughest challenge even for trainers. Nand accompanied the probationers for it. “It was tough adjusting the first few days since one had to find a bush to attend nature’s call. Even women in the batch were as committed as the men while outdoors. It shows that even they can lead their forces in combat [after their graduation],” he says. The probationers are exposed to river rafting, rock climbing and even flying single-engined aircraft. At the Olympic-sized swimming pool, the emphasis is on diving techniques as well as scuba-diving.

“The probationers, including women, run for 10 miles every day, apart from physical exercise and swimming. For a week each, they are also attached to Andhra Pradesh’s anti-Naxal Force, the Greyhounds, and sent to Tamil Nadu’s Special Task Force training centre at Satyamangalam to learn jungle warfare,” says Kanaskar.

A trainer shows us around the shooting range that is being remodelled. “It’s not just important to take aim but to roll on the ground, come up on one knee and shoot to kill. This range will have a hostage-rescue environment, jungle environment, as well as counter-terrorism modules where trainees’ responses will be gauged. They are also being trained in handling explosives, how to deactivate improvised explosive devices, tactics and counter-tactics in hard situations,” says Inspector Soman, who is on deputation from the Central Industrial Security Force (CISF).

After the nine-month course here, probationers are confirmed as IPS officers and given an assistant superintendent of police (ASP) rank. For Sara Rizvi, a graduate from Mumbai who is currently doing the course, it has been a frenetic blur. “We are completing the modules. There is no breathing space at all. I don’t even have time for [press] interviews,” says Rizvi.

Another probationer says they are in classrooms or training outdoors from early morning to late hours. “I chucked up a software job to be here. Though we are all working hard, I am aware that all this exposure to adventure sports and live ammunition will help us take decisions that may save lives,” says a 25-year-old from Rajasthan, in the running for the ‘best cadet’ trophy.

Earlier, law-and-order and police administration took precedence at the NPA. What were considered tough courses were optional. “Now, everyone has to undergo martial arts training, jungle survival, courses in linguistics, technology, infotech, etcetera,” says Vijay Kumar who was recently handpicked to head the Central Reserve Police Force (CRPF), the backbone of the country’s fight against Maoist insurgents in several states and separatists in Kashmir.

The Home Ministry is planning further changes as well. In the past, IPS officers selected to be part of the National Security Guard (NSG), Border Security Force (BSF) or paramilitary administration never had to pick up the gun and participate in operations. All that is set to change, with more personnel being drafted into the NSG after the Mumbai attacks. “Police officers will no longer be selected only for their administrative skills. As leaders or trainers, they will have to be as fit as the men they command,” says a Ministry source. “Simulated combat firing has just been introduced at the NPA. It’s a quick draw-and-fire motion exercise. This is very important as specialised firing drills help in learning to respond quickly. Earlier, only special forces and paramilitary Quick Reaction Teams were exposed to such modules.”

An ASP allotted the Karnataka cadre in 2009, and who was from the first batch of officers that underwent the new training, recalls that when simulator grenades were handed out to them, many wondered if they had got into the Army by mistake. “There were lots of probationers who did not like the discipline and training,” he recalls, “But when it was pointed out to them that police work in the future would involve new challenges, they understood and worked hard.”