Magnificent Gogoi and His Flying Car

Kanak Gogoi is a serial inventor who won a national award for a pedal-free cycle. But the real jaw-droppers are his airborne vehicles. 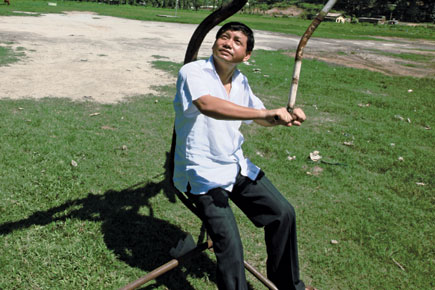 Kanak Gogoi is a serial inventor who won a national award for a pedal-free cycle. But the real jaw-droppers are his airborne vehicles.


Kanak Gogoi a compulsive inventor. His workshop, overlooking the lush Sarania Hills in Guwahati, is strewn with outcomes of his creative impulses. It is littered with work tables, raw materials and strange-looking contraptions that seem straight out of a sci-fi flick.

At one end is the Trygo X that he invented to outsmart the city’s maddening traffic. With one wheel at the back and two in front, this contraption is meant to zip in and out of congested lanes. Right next to it, peeping out of its covers, is an emerald coloured vehicle—a car that runs on “compressed air”. Inspired by the looming threat of global warming, Gogoi fashioned this vehicle by integrating the engines of a motorcycle and Maruti 800.

Each creation reflects Gogoi’s knack of solving practical problems. If he sees one, his mind automatically starts thinking up a plausible solution. He gives it whatever it takes—because once an idea gets hold of him, he is like a man possessed, often working in his workshop till the wee hours of the morning.

Lately, Gogoi’s thoughts seem to have grown wings, as it were. He has begun work in earnest on the prototype of a flying car. It is not just an idea, but a long cherished dream. As a child, he would often look up at the bright blue skies and long to be up there. But financial constraints forced him to abandon such fanciful flights of thought. “I don’t want others to be deprived of this dream like I was,” says Gogoi, who wants to make the vehicle as cost effective as possible.

One walks to the other end of the workshop expecting an intricate, complex looking model. Instead, a gargantuan, six-legged apparatus lies there, letting out a low hum as Gogoi’s team members test the propellers attached to each scrawny limb. Though the design seems a bit Spartan right now, Gogoi assures us that this is only because it is still in its elementary stage. In a couple of months, this prototype with transform into a sleek vehicle with wings.

The design principles of a helicopter and an aeroplane have been combined to make this machine, says Gogoi. The propellers are designed to give this petrol-powered car its initial lift. Once it attains a certain height, the in-built wings are expected to open out in a single smooth motion and its thrust engines will let this craft cruise forward. And while approaching the destination, the two thrust engines will take a 90º turn and become lift engines to enable a smooth landing.

Once ready, Gogoi claims, the vehicle should be able to fly 1,000–2,000 ft above ground level and achieve a maximum speed of 500 kmph, burning as little as 30 litres per hour. “If I fit in a turbo engine, it could achieve a much higher speed. But that will simply increase the cost of the vehicle,” says Gogoi who is still trying to come up with a suitable name for his invention.

Interestingly, the flying car does not even need to accelerate down a short stretch of road to achieve take-off. “Once it’s in an open space, it doesn’t require any run up. It is built for vertical take-off and landing,” he exults. However, don’t expect it to match its air speed on the road, as it will only be able to manage 40 to 50 kmph on the ground, thanks to friction.

It is a hot sultry afternoon in Guwahati as Gogoi steps into the driver’s seat to test the prototype. With the locality experiencing severe load shedding for the past two days, the car’s battery has been discharged. After much scouting, an alternate battery is brought in, and Gogoi is good to go. As the noisy propellers come alive, the car suddenly takes off the ground. It takes all his team’s energy to hold the car down and keep Gogoi from hitting the roof of his workshop. “I am still testing the weight-to-thrust ratio,” he grins, as the car hovers 3 ft above the ground.

There is an endearing child-like innocence about Gogoi. His candour is evident in his designs as well. They reflect clarity and simplicity. To make his designs cost effective, he scours industrial scrap markets in Delhi, Kolkata and Coimbatore for material to re-purpose.

Always on a lookout to add something new to his knowledge base, Gogoi is currently learning computer-aided design (CAD) to streamline his processes and get a better hang of aerodynamic simulation. “It would also help me perfect my designs in the initial stages itself,” he says.

One would think that an invention like that would have the entire country beating a path to his doorstep to catch a glimpse of this unique vehicle. However, that’s not the case. Gogoi is one among dozens of grassroot inventors in the country, whose creativity remains unacknowledged, perhaps even unnoticed. A shy, unassuming man with bright smiling eyes, 47-year-old Gogoi would have possibly lived his entire life in anonymity if it weren’t for an odd article or two in the media.

His inventions would have lived an unsung existence in his workshop, with no one ever getting a whiff of the quirky brilliance behind them, had it not been for an award bestowed on Gogoi by the National Innovation Foundation earlier this year for his design of a bicycle that can move without pedalling. Only now is he getting recognition in his own state’s scientific and engineering circles as a ‘serial innovator’. He has been on an invention spree since 1987, and his other wonders include a power hang-glider made with a two-stroke motorbike engine, a water cycle, an amphibious boat and an electric speed breaker that can harness the kinetic energy of a moving car.

Without organised funding by private investors or government bodies, Gogoi has had to painfully part with some inventions that he could not afford. “Some of them, like the solar hybrid car, require heavy maintenance costs,” he says, “Instead of seeing them rot in my house over time, it hurts less to bid adieu to them in a single day.”

Not formally schooled in any branch of science, Gogoi dropped out of school after his Class X exams. In any case, his childhood love for science could never translate into marks.

“I don’t know what used to go wrong. At home I could put together complex electrical devices, but in school I would just about manage to pass in science,” laughs Gogoi, who quit school to scout for ways to earn money. There was a financial crunch at his home in Assam’s Lakhimpur district, and the state was aflame. “I didn’t give much thought to the consequences of dropping out. Anyway, when militancy began to take root in Assam, there were more strikes than classes.”

Retaining a passion for science was an achievement in itself. He ventured into selling milk and designing signboards, though he would spend nights reading technical texts to get a hang of scientific principles and theories. People would often scoff at his initial inventions, wondering why he was wasting so much money on such pointless things. “They thought I was crazy,” he says.

Shutting the ridicule out, he went about his work “with a dogged determination”, in the words of Professor AK Das, head of design at IIT Guwahati, who has been helping Gogoi with technical analysis and reviews for the past eight years now. “He is extremely adaptable to situations—by no means is he rigid in his views,” adds Professor Das, “he is extremely open to censure and criticism.”

Strangely enough, at a time when everyone is trying to patent something or the other, Gogoi doesn’t want to exploit his inventions commercially. A firm believer in the ‘open source’ movement, he is content creating designs and having them shared widely with others. “For me, this is a hobby and not a money-making venture. The minute you start thinking about the money, it distracts you from your creativity,” says Gogoi, who now earns his living off a real estate agency.

As his flying car prototype finally descends to the ground, another idea blossoms in his head. What if people could walk on air? “That is my dream machine,” says Gogoi. According to him, there is no mumbo jumbo in this, just pure mechanics. However, it is a secret he is not yet willing to share. “I just know it will happen, because I believe…” he signs off cryptically.