Love in the Time of AFSPA 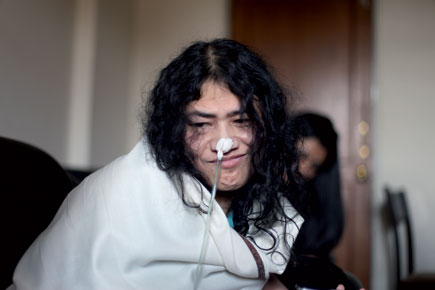 
They sit on a bench in the courtroom holding hands. This time, they are in Delhi. Irom Sharmila and Desmond Coutinho do not get such chances often, though Sharmila is quite used to the settings of a courtroom. She has to appear in a court not very far from her house in Imphal, Manipur, every three weeks or so. Sharmila’s eyes are moist. She has been crying. It is not uncommon for people to cry in a courtroom; they usually cry because they feel intimidated. But Sharmila is not intimidated. She is used to it, having gone through the routine for more than a decade now.

These tears are for her lover who now sits by her side while the cops try hard to look elsewhere.

At Sharmila’s neck is a green rosary gifted by the 48-year-old Coutinho. Its colour almost matches that of a semi-transparent pipe that she says has become a part of her—the tube through which she is nose-fed, the tube that bears the inscription ‘SAFTIFG16’.

“Do you understand that there is a charge of attempt to commit suicide against you? Do you want to plead guilty?” Akash Jain, the magistrate, had asked her moments ago. Sharmila’s response was meek. She spoke for a few minutes. It was the same thing she has been saying in numerous media interviews. In short, that she wants to live.

There is a break of about 20 minutes. Sharmila’s senior counsel Colin Gonsalves appears briefly by her side and tries to explain the charges to her. He leaves the court soon. Later, two juniors plead her case. They fumble with the details of her residence. They are also confused about whether it was in 2005 or 2006 that Sharmila was brought to Delhi for the first time.

Minutes later, the charges are framed.

In November 2000, Sharmila, who was 28 years old then, began an indefinite fast against the Armed Forces Special Powers Act (AFSPA). She was prompted by an incident in which ten civilians were allegedly shot dead by troops of the Assam Rifles in Malom, a town located in Imphal valley. She has stuck to her fast ever since, and has been forcibly fed all these years by a pipe running through her nose.

In October 2006, Sharmila was sneaked into Delhi by a human rights organisation. It was a coup of sorts. She sat on protest at Jantar Mantar. Later, she visited Rajghat as well. For two days, she refused to accept her piped diet, demanding that the Government first make public all recommendations of the Justice Jeevan Reddy Committee that had been set up to examine the AFSPA. Shivraj Patil, Home Minister of India at the time, told a group of activists that he would share the recommendations only with Sharmila.

By now, she was well recognised by TV audiences across India, and politicians knew it. She was met by Manipur Chief Minister Okram Ibobi Singh. But nothing happened, except that two days later, she was picked up the Delhi Police and charged a day later under Section 309 of the Indian Penal Code with an attempt to commit suicide.

Ironically, a day later, the Reddy Committee report was leaked by The Hindu. The committee, whose report is yet to be officially accepted by the Government, had recommended that the Act, which applies only to a few states of India that have insurgency movements, be repealed.

More than six years have passed, 12 since Sharmila began her fast against the AFSPA. Since then, several human rights violations by India’s armed forces have taken place in Manipur. But the Act stays in place. What Sharmila sacrificed was the pleasure of an ordinary life.

Three years ago, Sharmila started receiving a series of letters from a man who called himself Desmond. In March 2011, he professed his love and she accepted it. However, the human rights activists who surrounded her reacted adversely.

She was a saintly figure by now. She was no longer a person; she was an icon. And icons do not fall in love; icons do not have the right to fall in love. It became difficult for Sharmila and Desmond to meet in Imphal. But they managed. They kept in touch. He sent her letters and gifts: cuddly teddy bears and books, among other things.

Love changed her. She began to smile. She kept his letters by her side in a cardboard box. When nobody else was looking, she would take them out and read them—over and over.

Has love made her weak?

After the court appearance, she is back at Manipur Bhawan, where a posse of activists manage her interviews. In a bright pink phanek, she sits on a leather sofa, her legs curled under her as she tries to answer the questions patiently. Her washed-but-uncombed hair is parted down the middle.

Asked about love, she scratches her foot shyly with the visiting card of a journalist. “I am a very simple girl,” she says, “I will settle down, but only after my demands are met. Life is a challenge. Life is an experiment.” How does she spend her day? She pauses, and a smile appears. “Most of the day, I’m daydreaming of happiness,” she says. “Their charges are baseless. I never tried to commit suicide,” she says as an afterthought.

Sharmila talks about Mahatma Gandhi, living in harmony with the environment, her nose tube being her instrument of struggle, how Manipur has been turned upside down by its cycle of violence. A couple of cops from the Manipur Police look on. Her constant companions, they have heard all this too often.

The interviews will go on, and Sharmila will say more or less the same thing. What more is there to say? She wants the AFSPA to go away. There is no sign that it will. Meanwhile, there is Desmond, and the dream of settling down with him.

The interviews will extend late into the night. Early morning the next day, a flight will take her back to the room in Imphal’s Jawaharlal Nehru Institute of Medical Sciences that has been her home for 12 years. Desmond will see her off at the airport and then perhaps return to Goa, where he lives. They will probably hold hands again at the airport. He might gift her another book.

Right now, a book gifted by him lies by her bedside. It is Alexander Pushkin’s Eugene Onegin, a novel written in verse, one of whose central characters, Tatyana, reads mushy novels and dreams of love:

She listened, the thought was planted…/ Until at last her fate was granted:/ She fell in love. For thus indeed / does spring awake the buried seed

In Sharmila’s case, the spring has awakened a buried seed. But her fate is far from granted.