As its Muslim supporters gravitate towards the Congress, the SP looks to gain among saffron voters 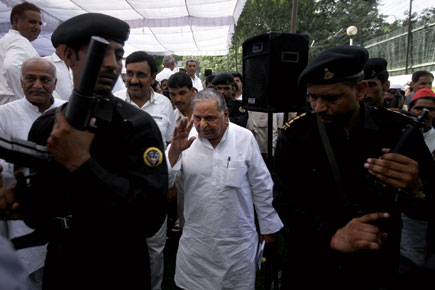 As its Muslim supporters gravitate towards the Congress, the SP looks to gain among saffron voters


For all those who try to understand the Samajwadi Party’s politics on the basis of the M-Y (Muslim-Yadav) factor, Mulayam Singh Yadav’s recent utterances in praise of BJP leaders must have been baffling if not shocking. On 23 March at Lucknow, the SP chief said, “Advani sahab says UP is in a very bad state and corruption is rampant… Now I have to assess the situation when a senior leader like Advani says such a thing. He never lies. He always speaks the truth, as I have said many times… I’ll go and meet him again.”

About three weeks ago, Mulayam had sprung a similar surprise in the Lok Sabha by announcing that his party would change its views of the BJP if it changed its “policy and mindset” on certain issues. “If you change your views about Muslims and Kashmir, we will change our views towards you,” he had said in his speech on the Motion of Thanks to the President’s Address on 27 February. In the same speech, he had also said that his party had “no differences” with the BJP on issues of patriotism, language and border security, and complimented the saffron party’s chief Rajnath Singh for speaking about ‘socialism’ in his intervention on the Motion of Thanks.

Surely, praise for Advani, Rajnath Singh and the BJP in general is unusual for Mulayam, who has made a political career of posing as a bulwark against saffron forces. So significant had this ‘secular’ image been for Mulayam even in the state’s Assembly polls of 2011—won hands down by the SP—that without it, his party would not have managed to get a majority of Muslim votes. So what explains his sudden fixation with the BJP and its leaders?

The explanation, says a senior SP leader, lies in Mulayam’s desperation to make up for the losses his party may suffer if Muslims shift allegiance to the Congress, which in any case is always a greater possibility in a Lok Sabha as opposed to an Assembly election. This pragmatic politician, therefore, has a practical reason to give BJP supporters an impression that his party is not deadset against the saffron party and that he holds the party and its leaders in high esteem.

“Netaji (as Mulayam is referred to in his party) has a way of finding opportunities,” says a senior SP leader who prefers to remain anonymous. “I think this is a qualitative change. The same strategy cannot work for Lok Sabha as well as Assembly elections. In Assembly polls, the SP is the natural choice of Muslims, but this is not so in the case of parliamentary elections, in which the Congress, not SP, is seen by Muslims as the main party fighting the BJP. So a new strategy is needed to make up for Lok Sabha electoral losses because of this inevitable shift of minority votes towards the Congress.”

At least, in such pragmatism, Mulayam has been consistent. All those who are surprised by his utterances on the BJP and its leaders tend to forget how the leader had played a similar card ahead of the last Lok Sabha polls in 2009, when he aligned with Kalyan Singh, considered one of the architects of the Babri Masjid demolition, and made his son Rajvir Singh a general secretary of the SP. The shock was no less that time and it led to several Muslim leaders—for example, Azam Khan—deserting the party. But Mulayam’s grand ‘backward caste’ consolidation with the help of Lodh leader Kalyan Singh helped the SP win 22 Lok Sabha seats in the state. One can only guess what the party’s position would have been at the time had he not swung Lodh votes, given that significant numbers of Muslims had switched to the Congress.

However, soon after, once the SP started preparing for Assembly polls in UP, it re-adopted its role as a bulwark against Hindutva forces in the state. The Mulayam-Kalyan bonhomie ended within months of the 2009 general election. Rajvir Singh resigned from the SP and Kalyan Singh regretted his decision to join hands with the Yadav leader, calling the latter a ‘political opportunist’ and pointing to his record of ditching the Left parties and old-time associates like Beni Prasad Verma and Raj Babbar. On his part, Mulayam, working now on a strategy for Assembly polls, renewed his efforts to build bridges with the Muslim community, of which he had once been hailed as a champion. The strategy bore results, and his party won a landslide in the state polls of 2011.

The cycle is complete. As Mulayam again prepares for parliamentary elections due early next year, the threat of Muslim votes—in a reversal of the 2011 Assembly trend—shifting towards the Congress has begun to loom large over the SP, and once again, Mulayam is desperate to make up for the losses this may inflict on the party.

The only way Mulayam can stop this drift of Muslim votes is by forging a pre-poll alliance with the Congress, a possibility that the Grand Old Party is loath to entertain. Remember, the Congress High Command’s gamble to contest the 2009 Lok Sabha polls alone in UP had paid off well, and it won 21 seats there. It is widely believed that the stunning performance of the Congress in 2009 was largely on account of Muslim votes. The party’s gain was the SP’s loss, and the Congress would be looking for a repeat of that, maybe even an improvement on its tally of 21.

That leaves Mulayam with no option but to try wooing segments of Hindu castes that have not been traditional SP voters. Trying to gain Dalit voters in UP remains a non-starter of a plan, since the BSP has a near monopoly on their support. Upper castes as well as non-Yadav sections of Other Backward Castes are, therefore, the only social groups that can act as a poaching ground for Mulayam. “These are also the castes the BJP gets all its support from,” says the SP leader. “We expect that the amicable relationship between leaders of the two parties will send positive signals down the line. It may help reduce the dislike [of the SP] among these castes.”

And therein lies the calculation behind the SP chief’s strategy. Mulayam’s utterances have already pleased BJP leaders. Not only did Rajnath Singh welcome Mulayam’s friendly gestures while speaking on the Motion of Thanks three weeks ago, even Sushma Swaraj, Leader of Opposition in the Lok Sabha, on 20 March had words of support for the Yadav leader, saying that Union Steel Minister Beni Prasad Verma had unfairly tarnished the image of the SP leader, who she described as “a respectable leader of the House”.

Although the thaw in ties would by no means guarantee the SP a wave of support among UP’s upper castes and non-Yadav OBCs, it may strengthen the possibility that in constituencies where BJP candidates are not in a winning position, saffron votes might be more inclined towards the SP than any other party. Given the state of the BJP in UP, as per the SP’s calculations, the number of such constituencies is considerable. In the 2009 general election, the BJP won only 10 of the state’s 80 seats, with a vote-share of 17.5 per cent.

Already, the SP has won considerable goodwill among a section of UP’s upper castes by opposing the proposed Constitution amendment bill on quotas for SCs and STs in government service promotions. The pitched battle that his party MPs fought in Parliament during the Winter Session last year was hotly debated among upper castes who were impressed by the SP chief’s spirited opposition to the proposal. While Mayawati seemed determined to push the Bill through, the BJP and Congress appeared defensive. The matter is not over yet, and Mulayam appears confident of enhancing his stature further among upper castes by making the most of this issue.

Mulayam’s revised strategy also explains the SP government’s lethargy in quelling Hindu-Muslim violence in the state. According to a report prepared by the Union Home Ministry, UP topped in incidents of communal violence in 2012, recording nearly 100 such cases in which at least 34 people died and 456 were injured. Several Muslim organisations have accused the SP government of failing to maintain communal harmony in the state.

All said, it is clear that the former wrestler is ready to embrace the BJP. His utterances and the UP government’s policies have already started altering his party’s image as a bulwark against Hindutva. The BJP appears quite happy with this shift. So is Mulayam. And there lies the irony.