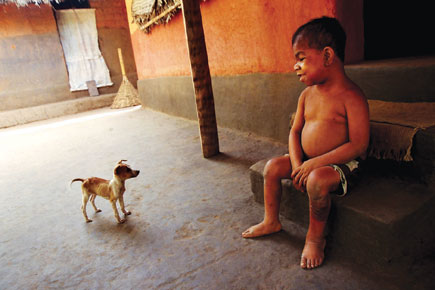 
Sruthi, a student of Government Higher Secondary School, Padre, in Kasaragod, Kerala, was just three when her mother died of cancer. Sruthi was born with deformed limbs. Both tragedies had the same cause—a pesticide called endosulfan that had been sprayed aerially in Kasaragod for years. Sruthi first got admitted to school at the age of 8, and it was an ordeal to walk through the hilly terrain to reach her class. But she did it. She has undergone multiple surgeries and has to undergo artificial limb modification every year. Her severely deformed right lower limb was amputated to enable the fitting of prostheses. In spite of all this, Sruthi continued to study and is now intent on becoming an engineer. In Kerala, her photograph has become a signifier of both the plight and courage of Kasaragod’s endosulfan victims.

On 29 April, Sruthi had two reasons to celebrate. She had cleared her SSLC examination in style. In three subjects she scored 90+, 80+ in two more, and over 70 in all the others. The other reason for her jubilation was that the world decided to ban endosulfan. This happened despite India, her own country, trying its best to spike the ban. (In 2001, the countries of the world had met at Stockholm to eliminate organic pollutants and make the world a safer place to live. Endosulfan was not on the list then, but its harmful effects could not be ignored for long. Soon, there were calls to ban endosulfan too.) The fifth conference of the Stockholm Convention, which was to decide on the endosulfan ban, was held in Geneva over 25–29 April. Dr C Jayakumar of the Kerala-based public interest trust Thanal was present as an independent observer. Jayakumar represented the anti-endosulfan movement of Kerala.

On the opening day of the convention, Kerala Chief Minister VS Achuthanadan went on a day-long hunger strike. It is unusual for a chief minister to do this, but endosulfan resonates in Kerala like nowhere else in this country. Jayakumar decided to leverage the strike. Outside the convention hall during a break, he started showing a live webcast of the fast on his laptop. Soon, a small crowd gathered to watch it. “Many delegates from member countries wanted to extend their support to the Chief Minister. Watching the show, some of them wished the Indian Government would listen to its people,” he says.

The conference ended up with a global ban on the pesticide. “The decision is really a tribute to millions of farmers, organisations and activists across the world—especially to the people of Kerala—who fought this relentless battle, and the inspirational leadership of their Chief Minister VS Achuthanadan,” Meriel Watts, senior science advisor of PAN International (Pesticide Action Network), a global platform of NGOs working against hazardous pesticides, told the media after the conference.

Kerala’s role has been pivotal in the movement against endosulfan in India. And the reasons are clear. The state worries about endosulfan because it has been the worst hit by it. The pesticide was first sprayed aerially on cashew plantations in Kasaragod district in 1976. Till 2001, this would happen regularly thrice a year, until a high court ruling effectively banned its use in the state. Endosulfan poisoning at Kasaragod was first reported in the media in 1979. Stunted growth and deformed limbs were noticed among newborn calves. By the 1990s, health disorders of a very serious nature among humans became apparent. Children were found to be the worst affected—with congenital defects, mental retardation, physical deformities, cerebral palsy,

epilepsy and hydrocephalus. In areas where endosulfan was used, people showed chronic ailments, many of which were irreversible and difficult to treat. There is a high prevalence of central nervous system disorders, cancer and reproductive disorders.

In the last two weeks preceding the convention, the state saw a tremendous surge of protest campaigns against the Centre’s resistance to a ban. Achuthanandan’s fast and the overwhelming support it got kept the issue on boil.

The Indian government was clearly against a ban. India has a monopoly in making and selling endosulfan. Current worldwide production is estimated at 18,000–20,000 tonnes a year, of which Indian pesticide companies account for about 60 per cent. Till early 2000, the European Union was the largest producer, but then it banned endosulfan and began to phase it out. At the Geneva conference, India was in an absolute minority. Forced into a corner, it finally put aside its decade-old resistance to the ban and agreed on a compromise. But not before it had done its damnedest to scuttle it.

A draft statement India released on behalf of the Asia-Pacific Region on 25 April, the first day of the convention, strongly opposed the ban. The statement not only claimed that ‘no health hazards are established’ but also argued that the decision should be made by consensus and not by vote. However, Qatar and Bahrain challenged India’s strategy of presenting this position as that of the entire region. “Qatar took a leadership role in favour of banning endosulfan. It was quite unfortunate to see Indian delegates stepping out of the conference hall every now and then to chat with representatives of Excel Crop Care, one of the leading pesticide manufacturers in the country,” says Dr Mohamed Asheel, assistant nodal officer of the Kerala government’s Endosulfan Remediation Programme, which identifies, rehabilitates and compensates victims.

A couple of weeks ago, in an off-the record chat with journalists in Delhi after a press meet, R Hariharan, vice-president of Excel Crop Care, had said that they do expect a ban to come into force, but only by 2015. The long notice he expected before the ban actually kicked in is significant because it will allow endosulfan makers ample time to gradually step down production and clear their stocks.

A couple of days before the Geneva conference, an all-party delegation from Kerala met Prime Minister Manmohan Singh about supporting the global ban. While Singh did not give any assurance, he promised to take action based on a study by the Indian Council of Medical Research on the hazardous impact of endosulfan. He also told the delegation that the PMO had given directions to expedite the study. This was again not true. Dr VM Katoch, ICMR director, told the media that they have neither started the study nor received any communication to expedite it. He said it will take a minimum of three years to complete. “There are around 150 studies on endosulfan by non-government and government agencies. All these studies concur on the health hazards of endosulfan. We don’t understand why the Government is pushing for another study,” says documentary filmmaker MA Rahman, who has been at the forefront of the anti-endosulfan movement in Kerala.

Recently, the National Human Rights Commission also strongly recommended a total ban on endosulfan and asked for a nationwide survey of populations affected by its use. In a letter sent to the Ministry of Environment, the Commission lambasted the Central Government for its failure to account for the disaster caused by endosulfan and for its unwillingness to accept the pesticide as a persistent organic pollutant, ignoring a plethora of studies.

So, if activists are still not convinced about the Indian Government’s intentions—even after the Geneva conference agreed on a ban—the reason is that the exemptions India managed to extract are disquietingly on the lines predicted by Hariharan. The global ban does not mean an immediate stop to the use of the pesticide. Endosulfan can still be used against 44 pests in 22 crops for a period of five years. This is extendable for another five years, followed by a review. To get an extension, India will have to present its case to the Convention again after five years. The process of registration of crops for extension will take one year. In effect, Indian pesticide companies will get enough time to phase it out. “This is unacceptable, though it is normal procedure to phase out a product. We fear the Central Government will continue listening to the pesticide lobby and may not expedite the phase-out,” says Rahman.

Dr Ahmed Asheel, another independent observer at the Convention, says there is no breathing time (despite the ban) for those who seek an end to the use of endosulfan. “The decision will not be binding on India unless it is ratified by the Cabinet. We have to continue our battle to bring the ban into practice as early as possible,” he says.

It has long been alleged that the Central Government is playing into the hands of the pesticide lobby. There is strong circumstantial evidence of it. On 22 February, Agriculture Minister Sharad Pawar informed the Lok Sabha that a number of states were opposed to a ban and wanted to continue using endosulfan. Information obtained under the RTI Act from the Agriculture Ministry by a Malayali journalist reveals a different story. Contrary to what Pawar said, not a single state has so far requested the Centre not to ban the pesticide. The ministry has received just six letters—none from the states—asking that endosulfan not be banned. Pawar may now have to face a privilege motion in the next session of Parliament for misleading the House. The motion has been moved by P Karunakaran, MP from Kasaragod.

It’s hardly surprising that it should have come from a Kerala MP, given the state’s tragic history of battling the ravages of the killer pesticide.