Kerala: Red With a Dash of Saffron 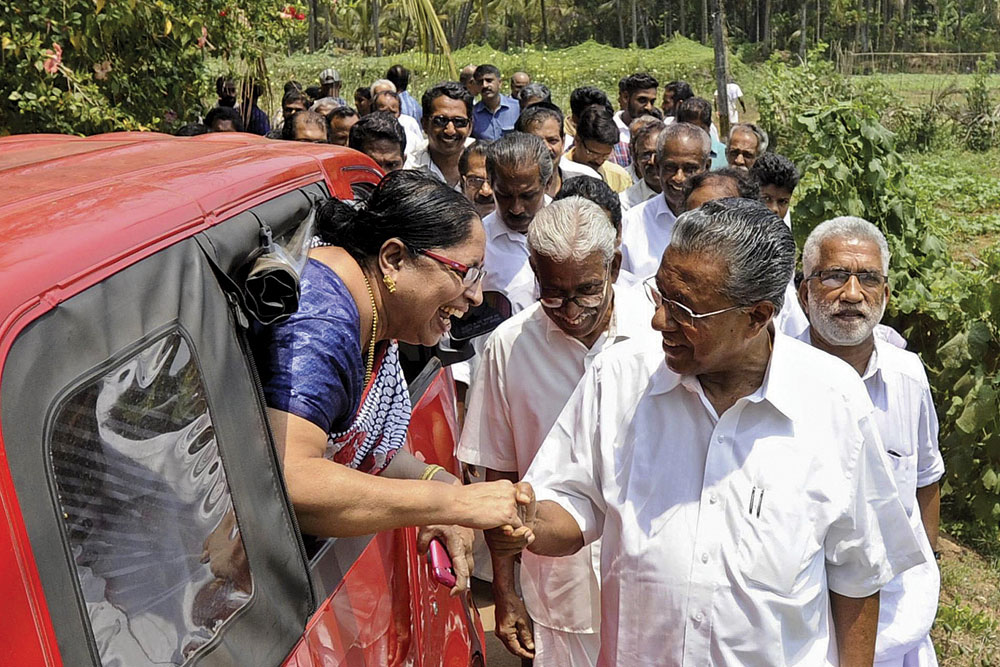 SINCE THE EARLY 1980s, by some unseen understanding in its electorate, Kerala has unfailingly switched between the two political fronts that vie for its throne. It adhered to the pattern this time too, as the Left Democratic Front (LDF) achieved power, winning 91 of the state’s 140 Assembly seats, ousting the Congress-led UDF. But for the first time, a BJP candidate won as well—former Union minister and veteran leader O Rajagopal, who comfortably got through from Nemom constituency in Thiruvananthapuram.

The UDF has suffered a humiliating setback after a no-holds- barred campaign in which it was seen as aligning with all and sundry to come to power. It has now been reduced to 47 seats from its earlier share of 72 seats, a slight majority. Many UDF heavyweights have lost, among them four ministers—K Babu (excise), PK Jayalakshmi (Tribal welfare), Shibu Baby John of RSP (Labour) and KP Mohanan (Agriculture)—Speaker N Sakthan, Deputy Speaker Palode Ravi and the Chief Whip Thomas Unniyadan. For its part, the BJP has secured second place in multiple constituencies and won more than 25,000 votes in nearly 40 constituencies. Even the CPM did not expect this thumping victory, though there had been a series of scams that went against the ruling UDF. Exit polls did not predict any wave, but had indicated that the LDF had a better chance of winning.

More than its Assembly debut, what the BJP will be glad about is securing second place in several constituencies. It also won more than 25,000 votes in nearly 40 constituencies. Rajagopal, who got 67,813 votes, won the Nemom constituency by a comfortable margin of 8,671 votes, defeating the outgoing CPM legislator and party stalwart V Sivankutty, who got 59,142. UDF candidate Surendran Pillai won only 13,860 votes, an all-time low figure for the UDF. The BJP’s showing is a long-term worry for not just UDF but also for the LDF, which argues that ‘the lotus bloomed in a pond dug by UDF’. “The data speaks for itself. Congress has to answer as to where the votes have gone. An unholy alliance between UDF and BJP in Nemom was quite visible. BJP did not even have polling agents in many voting centres,” says Kodiyeri Balakrishnan, state secretary of the CPM.

But it is also a little unfair to qualify Rajagopal’s victory like this. He is perhaps the only NDA leader in Kerala who has popular appeal, aided by an image he cultivated during his tenure as the Central Minister for Railways. An octogenarian, who has contested and failed eight times earlier, he also probably got sympathy votes.

For the BJP leadership in Kerala, it is a proud moment. It has emerged runner-up in seven constituencies, including Malampuzha, the constituency of VS Achuthanandan. BJP’s K Surendran was defeated by UDF’s Abdul Razakh in Mancheswaram constituency by less than 100 votes. Kummanam Rajasekharan, the state president who contested in Vattiyurkkav constituency in Thiruvananthapuram, lost by 7,600 votes. CPM state committee member and former member of Rajya Sabha, TN Seema was pushed to third position in his constituency, which was won by K Muraleedharan of Congress. In Malampuzha, NDA candidate C Krishnakumar secured 46,157 votes. NDA won more than 25,000 votes in around 45 constituencies. The BJP, along with its allies, has made considerable gains this time. At first glance, it seems that the alliance with BDJS, the newly-formed party led by Vellappilly Natesan, proved to be successful.

The UDF has lessons to learn. Babu, trapped by bar bribery allegations against him, was defeated by CPM’s M Swaraj in Thrippunithura constituency by 4,467 votes. KPCC President VM Sudheeran was not in favour of fielding Babu and a few others who were facing corruption allegations. However, Oommen Chandy favoured Babu and secured a ticket for him. Babu’s defeat has thus proven Sudheeran right. PK Jayalakshmi, the only Tribal member in the legislative Assembly, the youngest minister in the cabinet, was defeated by R Kelu of the LDF.

The RSP is now history. Shibu Baby John, Minister for Labour, the leader of this UDF ally, lost by a margin of 6,100 votes. The LDF secured thumping victories in Kannur, Thrissur, Kollam and Wayanadu districts. It has now made successful inroads into Malappuram, the bastion of Indian Union Muslim League, by grabbing two more seats in addition to its existing two. Nilambur was a secure bet for the Congress, represented by Kerala’s minister for electricity, Aryadan Muhammed. It fielded Shoukath, Aryadan’s son, only to be defeated by LDF’s PV Anwar.

Some questions remain: will there be grace in victory? Will the victors be able to meet the expectations of voters who turned their backs so decisively on a government mired in corruption? Also, will the Left dump the ‘appeasement’ policies of the UDF which perhaps sowed the seeds of BJP’s growth in the state?