Ten years ago, when armed intruders tried to run over Kargil, nobody knew about this area. But the war has changed this place forever 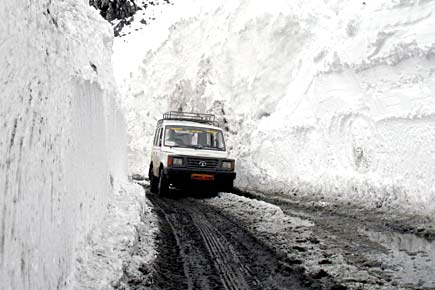 Ten years ago, when armed intruders tried to run over Kargil, nobody knew about this area. But the war has changed this place forever


This year, as we remember the heroes who courageously thwarted enemy aspirations in one of the world’s coldest battlefields ten years ago, let us not forget the place which bore the brunt of this gruesome war. Though the guns have been silent for a decade now, the price paid was very dear in terms of precious life, the economy and infrastructure as far as the people of Kargil, Dras and Batalik were concerned. Our brave soldiers defended the motherland victoriously, making us proud of such fine men in uniform.

Back then, Kargil was a war-ravaged town with civic amenities in disarray, medical facilities non-existent, homeless people in a tizzy, orphaned children without shelter, a crippled economy, tourism at a standstill and the civil administration in a fix as to how to go about things. In short, it was shell-shocked. That was ten years ago.

The Kargil of today is a study in transformation. After the Kargil War of 1999, a massive development drive was undertaken. The push was for economic growth, basic education, infrastructure development, tourism and telecommunications. It was done on a war footing, and the signs are in ample evidence.

In an interaction with Mohammad Sadiq, a local, I ask him what the war changed in Kargil. Everything, he promptly informs me— there was absolutely nothing here before the war. “There was no communication network,” he elaborates, “We had to trudge our way by foot most of the time, since there were hardly any roads. It is only after the war that the Army took initiative and built pucca roads connecting most villages.

The Army has also provided employment to locals as porters, gardeners and casual labour. The farmers now are able to get their crop to the town much faster and in a more fresh state. The women folk too accompany them to the markets, which is a remarkable change in this conservative society of ours.”

Buses and modern-day taxis now ply these roads as if they’re just another communication link, only busier than ever. Before the war, there were only about a hundred trucks in this region, but now the number runs into thousands. Enhanced Army presence since then has also meant an uptick in the local economy, as the forces hire the services of private transporters to carry goods around the region. State-owned transport services have also improved, with regular bus services between Kargil and Leh, as well as Kargil and Srinagar.

The introduction of domestic air services at Leh has been another boon for the once isolated people of Kargil, especially during winters when this region is cut off by snow for almost five months. With some luck, there will be direct commercial flights to Kargil proper, until which time the civil administration will continue to requisition the Air Force to run chartered flights for civilian passengers.

Tourism is picking up. While the bullets died down a decade ago, curiosity about the place has only risen and risen. Visitors have much to take back and talk about. The town market in Kargil presents a lively contrast to images from the dark days of the war. Not long ago it had just a sprinkling of shops, but a walk through the crowded market today would leave you spoilt for choice. Single-storey kuccha shanties have made way for regular shops that sell more than you would expect. There are bakeries and eateries serving local dishes and sweets, even as the locals have begun relishing the taste of goodies like cakes and cookies that are easily available now. Abbas Ali, president of the Merchant Association, says that before 1999 there were around 400 shops. Within the last 10 years, some 250 more have come up—and a few hotels too. “With the Army, Border Roads and other government agencies at work,” he reports, “our trade has expanded manifold.”

Telecom networks have played a role in the boom. It is a matter of pride that the remotest reaches of the region are now a phone call away from the rest of the world, thanks to BSNL’s mobile network. There is broadband Internet connectivity as well, relieving people of the agonising wait for letters and news from dear ones, while also opening new doors of opportunity.

College and school children flock to Internet cafes to share their views and stay connected with friends. “Now we can see our results online, book our flights and get railway reservations without travelling to far-off places like Jammu,” says a young student, dressed quite like any metropolitan youth. Asked about attire, he says he had never imagined that he would wear such clothes, but exposure to visitors from all over has shifted the limits of what community elders consider acceptable.

It is all about being plugged in, and this happens in multiple ways. Also set to change is the power availability in the region. In late 2010, the Chutuk Hydel Project, a 44 MW project undertaken by the NHPC, is scheduled to be commissioned. It will bring electrification to Kargil, Dras, Batalik, Sanko and Mulbek.
A railway reservation counter that had opened in Kargil in 2004 had to be closed for lack of revenue, but there is widespread demand to restart this facility. With train services finally chugging along Kashmir Valley, the day is not far that Kargil will have its own railway station. A survey for this is already underway, exploring the possibility of tunnelling through the Rohtang and Zojila passes. The first rail link that is proposed would connect Leh with Bilaspur in Himachal Pradesh. Six passenger trains and nine freight carriers are envisaged along this 498-km long stretch, at a projected cost of Rs 22,000 crore.

Institutional development has not been neglected. Under Project Sadhbhavna, the Army has set up many institutions for education and vocational training for the people of Kargil. School children who used to walk miles are now ferried by Army transport. A visit to Asha School, being run at the behest of the Army, shows the power of sustained local engagement. Razia of village Hardas speaks highly of the special care and attention that the special students here get. “Society never looked up to these special children as special,” she says, “and we also did not know that there are special ways to care for them. Slowly we realised that there can be special schools where these children are trained to earn their bread and lead independent lives.”

Local women are also being imparted new skills at vocational training schools under Project Sadhbhavna. These women are being empowered, says Rehana Begum. Many of them have opened small units at home to generate income. Six years ago, Kharun Nissa was bold enough to open a beauty parlour. Though this was not appreciated by the local community back then, she is now seen as a fashion leader among the young.

Lady motorists are no longer a rare sight in Kargil. Women have taken to wheels with determination, even as they mark their presence in higher education—teaching and medical specialisations are favourites. If all goes by plan even Zanskar, the district’s remotest settlement, will have its own community health centre soon.

Medical facilities have shown huge improvement. As grants pour in from several sources, many small hospitals and medical aid centres have come up; some with the aid of the Army, others through the local administration. Free medical camps are conducted regularly. Mobile hospital vans, which were procured under the Chief Minister Relief Fund for the district hospital, are available for attending to critical cases as well. Pharmacy shops have increased from three to 13 today. A trauma centre is coming up in Kargil, at a cost of Rs 1.6 crore. There is a sub-district hospital being built in Dras for about Rs 8 crore, which would be a blessing for the people here because it remains cut off from Kargil for most part of the year. Bimbat, near Dras, had a medical aid centre which got upgraded to an allopathic centre recently.

The changes are breathtaking. It is, of course, a matter of immense irony that it took a war and all the attendant attention to give regional development here such a strong impetus. It was difficulties for the military that brought home the perils of inadequate infrastructure in border areas. But the lesson has evidently been learnt. Development is now the story of far-flung parts such as Kargil.

The only thing this charming little place now lacks is a cinema hall. This may not be part of the developmental canon in textbooks, but given their love of Bollywood movies, which they gleefully share with their countrymen in other corners of India, this should not be something they have to miss only because they are ‘too far away’. Nobody is any longer.