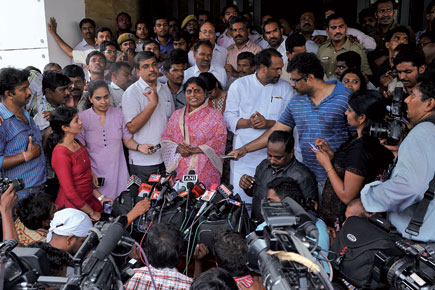 
The YSR Congress Party (YSRCP) headed by its jailed scion, YS Jaganmohan Reddy, is shaping itself in the mould of the Sharad Pawar-led National Congress Party (NCP) in a bid to deal with the Congress. After his father and former Chief Minister YS Rajasekhara Reddy’s death in September 2009, Jagan has had a rollercoaster relationship with the Congress, which eventually led him to walk out of its embrace and float the YSRCP.

Though the YSRCP has given him electoral dividends with 17 MLAs and two MPs and poses a threat to both the Congress and TDP in coastal and Rayalseema districts, the party is aware that it may not be able to translate the bypoll gains into something huge. That is why the party wishes to see the Congress as a forgiving partner. On the YSRCP’s second anniversary last week, Jagan’s mother and party working president YS Vijayamma announced that she would support the UPA after the 2014 Lok Sabha polls and ruled out any truck with ‘communal forces’ led by the BJP. Though there was nothing new in her stand—she was only reiterating what Jagan had said before he was packed off to Chanchalguda Jail—it has nevertheless left political parties in the state bitter as they see the YSRCP pursuing an NCP model in Andhra by the time the state goes to polls in 2014.

Faced with criticism from other parties, including Andhra Congress MPs, Vijayamma later made a U-turn and ruled out any such support. Party insiders say the YSRCP is testing the length of its friendship band with the Congress as the CBI is due to file chargesheets against Jagan by month-end. “His family is desperately seeking bail for him by making appropriate political noises. The Supreme Court had earlier made it clear when Jagan sought bail that it would wait till the CBI filed the chargesheet. Such friendly gestures to the Congress would go a long way in watering down the charges and enable bail,’’ a family member says.

Jagan is in jail for allegedly profiting while his father, YS Rajasekhara Reddy, was Chief Minister between 2004 and 2009. As quid pro quo, 33 companies and individuals who benefitted from YSR’s largesse invested in Jagan’s companies, says the CBI. The Kadapa MP is one of the richest in India and had declared assets worth Rs 365 crore in April 2011.

The YSRCP feels an NCP model would do it good since it can then remain independent and choose its stand vis-à-vis the Congress. “The Congress is not expected to come back in AP nor will it be able to replicate the numbers it got in 2004 and 2009 that helped the UPA come to power at the Centre. The YSRCP wants to fill that vacuum and will be realistically able to form a government with Congress support in the state while it can win a handful of Lok Sabha seats and help the UPA shore up its numbers, something that the NCP has been able to do,’’ says a source.

Pawar quit the Congress to form the NCP when Sonia Gandhi’s foreign origins became an electoral issue. Though it’s in alliance at both the Centre and in Maharashtra, the NCP has managed to maintain a separate identity despite talk of merging his outfit with the Congress. The same formula may work for Jagan now as he sees himself playing a key role in the selection of the next Prime Minister.

Jagan has had several confrontations with the Congress High Command, which stymied the rise of YSR’s son, then a first-time Kadapa MP. He tried to split the party several times while K Rosaiah was at the helm. It eventually replaced Rosaiah with Assembly Speaker Kiran Kumar Reddy to halt desertions. He also went ahead with his odarpu or thanksgiving yatra to console families of victims who attempted or committed suicide in shock after YSR’s death.

After floating the YSRCP he won the Kadapa Lok Sabha seat while his mother retained her Pulivendala Assembly seat. In June last year, with Jagan in jail, the YSRCP won 15 of 18 Assembly bypolls across AP and the lone Nellore Lok Sabha seat in June 2012. This landslide bypoll victory was the first electoral confirmation that the YSRCP was gaining popularity over the Congress.

In AP, Telangana’s statehood and the YSRCP’s rise dominate most of the political discourse. While the TRS and BJP are on the same page on the Telangana issue, the TDP and YSRCP have not made their stand clear and are waiting for the Congress to make the first move. At the height of the Telangana movement that spawned political instability in 2009-10, the Congress had committed itself to carving out a separate state. Jagan’s ambiguity on the issue will only help him consolidate numbers even as his party works out a grand strategy to replace the Congress in the state while supporting it at the national level.