Rajarhat New Town is billed as the face of modern Bengal. But it’s a façade for injustices that cancelling an odd infotech park cannot undo 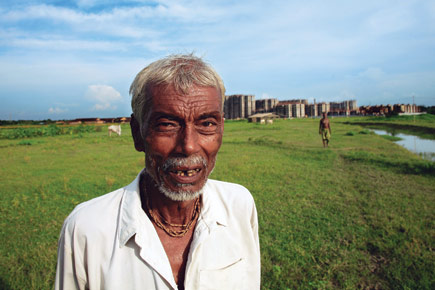 
Zipping down Kolkata’s Rajarhat Expressway to the airport is an experience that lends itself to many a conversation. The smooth, six-lane highway slices through a frenzy of construction that presents the face of a resurgent Bengal. Swanky condominiums, glitzy steel-and-glass office blocks, and glittering malls dot the lush landscape. But tucked away behind them are thousands of stories of injustice and brutality. Of sickening land grabs, thousands of poor people reduced to penury, and a sordid nexus between corrupt policemen, venal politicians and greedy promoters, all of whom are involved in murky land deals.

Rajarhat New Town, Buddhadeb Bhattacharjee’s showpiece township, stands as a monument to the careless displacement of the poor for the rich and mighty. It is a township that has smothered the livelihoods of lakhs who used to till fertile, multi-crop farmland. Inarguably, this is India’s worst land acquisition story; nowhere else has so much land been taken over by the state with such brute force from so many farmers, many of whom haven’t received a single rupee as compensation and are now virtually destitute.

The acquisition of 3,075 hectares of fertile farmland and water bodies (used for fish cultivation) in 18 mouzas for Rajarhat New Town started in 1996, with the state government citing the blatantly unfair Land Acquisition Act, 1894. “Landowners were issued notices by the government stating that their lands—all fertile farmland and water bodies used for fish cultivation—would be acquired for a ‘public purpose’. Almost all refused, primarily because the government was offering a measly Rs 6,000 for a katha (720 sq ft),” says Nilotpal Dutta of the Rajarhat Anti-Land Acquisition Committee.

Most landowners here were small or marginal farmers, with average holdings of one to two bighas (a bigha is 20 kathas). Moreover, the government even violated many of the 1894 Act’s provisions, says Dutta, by deploying arbitrary and illegal tactics to browbeat farmers into submission. “Many who didn’t want to part with their land were misled into believing that if they persisted with their objections, they would forfeit whatever compensation they were being offered,” elaborates Dutta. “A large section didn’t accept the compensation, which the government deposited in court and then went ahead with filling up the farmland and starting construction on the tracts despite such cases being sub-judice.”

Worse, say Rajarhat’s land losers, the government set its notorious ‘harmad bahini’ (armed squads of goons) upon those who spoke up. “They issued threats, assaulted people and even murdered some. The police acted as their auxiliary force,” alleges Dutta, whose charges are borne out by numerous accounts of intimidation and torture from residents of villages visited by Open.

Prahlad Mondal, a resident of Patharghata village, had 3.5 bighas and was offered Rs 13,000 a katha as compensation. “It was very fertile land and there was no question of parting with it… They (CPM goons) threatened me with dire consequences. I was arrested on trumped-up charges, spending a fortnight behind bars in April 2004. My land was taken over. The compensation I refused was deposited by the government in court, and though the case is on, my land has been occupied and filled with sand, rendering it unfit for farming,” says Mondal. He offers tuitions to eke out a hand-to-mouth existence.

His neighbour Lakhikanta Mondal has fared worse. This former owner of two bighas now works as a daily wage earner. His brother Ashtapada, who also owned two bighas, is living off the dwindling compensation and faces a bleak future. The government gave no advice on how to invest the compensation money, nor did it provide any sort of rehabilitation. “CPM leaders like (Housing Minister) Goutam Deb and (Industries Minister) Nirupam Sen promised jobs to all land losers, or vocational training. The promises have not been kept,” complains Ashtapada. The only jobs land losers have managed are that of lowly-paid security guards or janitors.

Far worse is the fate of sharecroppers and farm labourers who weren’t even considered for compensation. Like Harihar Mondal, 80, of Patharghata village, who once had work all year round on others’ farms. “I have no work now, since all farms have been taken over,” he weeps. There are tens of thousands like him.

“Women of land owning families work as maidservants if they’re lucky. Many have been forced into prostitution. Trafficking is rife, and alcoholism and drug abuse have risen alarmingly. Hundreds of men have become petty thieves or joined crime syndicates,” says Dutta.

Incidentally, the government, represented primarily by the West Bengal Housing Infrastructure Development Corporation (Hidco) that was formed in 1999, wasn’t content with merely deploying the police and CPM goons to scare farmers away. A few years ago at Paschimpara and Kaynati, for instance, police and government officials arbitrarily removed two large pumps that lifted water from the Bagjola canal and irrigated more than 3,200 bighas. “The government set up this system and installed the pumps in the early 1980s under the centrally-sponsored river lift irrigation project. I donated a plot of land for constructing the pump house,” recalls Yunus Mollah, 79. With the pumps taken away, all the farms turned fallow.

But that’s not all. Unscrupulous land sharks have been evicting farmers at gunpoint in villages around Rajarhat. The government has identified more than 4,200 hectares in 21 mouzas in the Bhangar-Rajarhat area for acquisition by private players directly from farmers and for eventual integration with the New Town project. And it gets murkier—crooked promoters, with the active involvement of politicians from all parties, have been simply taking over farmland without even bothering to follow the legal processes, while government departments have been giving such fraudulent transfers legal cover.

Prasanta Naskar of Shikharpur village, which borders a posh resort called Vedic Village, watched silently as 29 kathas of his two-bigha farmland was usurped by the resort’s promoters. “Their armed goons stood guard as lorries dumped silt on the 29 kathas where the standing paddy crop was just about to be harvested last year. They’ve fenced off the area now. The police and panchayat refused to register my complaints, and the promoters sent goons to my house to silence me. I got no compensation,” says Naskar.

The area abounds with such tales of woe. That the state government has announced the cancellation of its Rajarhat infotech park project near Vedic Village (because it ‘does not want to be involved in any illegal activity’) is no consolation for the thousands left landless.