Behave with the Governor: CM to His Party; Let Down by His Own Son; Darjeeling’s Limited Democracy; Vision Impossible 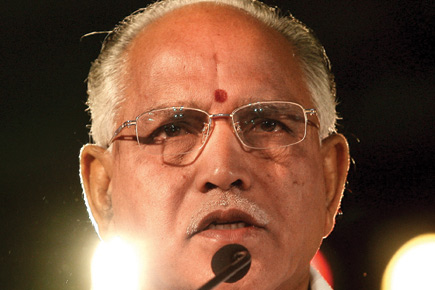 Behave with the Governor: CM to His Party; Let Down by His Own Son; Darjeeling’s Limited Democracy; Vision Impossible


Behave with the Governor: CM to His Party

These days, Karnataka’s Chief Minister BS Yeddyurappa is busy persuading his ministerial colleagues and sundry BJP leaders not to pick a quarrel with Governor HR Bharadwaj. The CM’s current role has raised some eyebrows as the BJP thinks that the Governor is exceeding his brief. Their resentment came after Bharadwaj sent notices to three ministers involved in the mining controversy, including the infamous Reddy brothers, following a complaint by the state Congress. The Congress has alleged several irregularities in the mining businesses of the brothers—Revenue Minister Karunakar Reddy, Tourism Minister Janardhan Reddy and their friend Health Minister B Sriramulu. They have already been reined in by the Supreme Court, which asked them not to carry out fresh mining activity till allegations of illegally moving border pillars for commercial interests on the Karnataka-Andhra border are resolved. When the ministers and senior BJP leaders, including M Venkaiah Naidu, tried to take on the Governor who was law minister in UPA 1, Bharadwaj publicly reminded them that he knew the powers vested with him pertaining to disqualification of MLAs and ticked them off politely that he could have chosen to refer the complaints to the Election Commission, instead of sending them notices himself. The crux of the issue raised by the Congress is that these ministers were also holding offices of profit. With another crisis looming large, Yeddyurappa moved quickly to diffuse the tension and appealed to BJP leaders not to badmouth the Governor. Looks like the crisis the Reddy brothers had stirred up last year for Yeddyurappa, and the fact that his tenure as CM depends entirely on them, may not be entirely lost on the CM.

Let Down by His Own Son

The running feud in the family of JMM Chief Shibu Soren has finally pushed the state to the brink of President’s rule, merely months after he started his third stint as Chief Minister on 30 December 2009. Ever since Jharkhand was formed almost a decade back, the mineral-rich state has suffered political machinations and rampant corruption. And yet, none would have expected the brazen display of greed for political power that was seen recently when JMM’s leadership was seen to be moving from the father to the son. It is common knowledge that Hemant Soren and not Shibu Soren had been exercising the power of the Chief Minister in the state. Not only did he have the last say in transfers and postings of civil administrators and police officials in the last five months, he even controlled the actions of his father, the Chief Minister. Shibu Soren, currently a Lok Sabha member, wanted to contest from an Assembly seat so as to continue as CM beyond 30 June. But the son would not allow it. Shibu Soren had initially urged Polus Surin—a Maoist-turned JMM MLA—to resign so that he could contest from the vacated seat of Torpa. But under pressure from Hemant, who was so desperate to become Chief Minister that he did not want his father to continue in the post, Guruji had to reverse his decision. Even the present crisis is being seen as Hemant’s desperate attempt to graduate from de facto to de jure Chief Minister of Jharkhand. Intra-family succession wars are not uncommon in political parties. But nowhere has it wrecked the party as well as the government.

In Darjeeling, democracy has been a major casualty since the emergence of the Gorkha National Liberation Front (GNLF) in the early 1980s. GNLF chief Subhas Ghising, who spearheaded the movement for a separate state of Gorkhaland before settling for an ‘autonomous’ council with limited powers for the hills in 1988, had crushed dissent and ruled over the picturesque hills and its poverty-stricken people like a medieval monarch. Massive corruption, his autocratic ways and lack of development turned the hill people away from him and led to the emergence of the Gorkha Janmukti Morcha (GJM) in 2007. Riding on the wave of popular discontent against Ghising and the Darjeeling Gorkha Hill Council that he controlled, the GJM, commanded by Ghising’s one-time aide Bimal Gurung, uprooted the GNLF and revived the demand for Gorkhaland. To the utter dismay of thousands of Gorkhas and other hill people, Gurung soon turned to be a worse autocrat, stifling opposition, preventing other parties from even holding rallies, and using strong-arm tactics to stifle dissent. Gurung also stands accused of collecting crores through extortion. The brutal murder of his arch rival—Akhil Bharatiya Gorkha League’s charismatic chief Madan Tamang—in full public view by suspected GJM goons last weekend has come as the proverbial last straw on the backs of the long-suffering people. Just like the popular anger that swept the GNLF to the sidelines three years ago, a massive outpouring of grief and rage against Tamang’s murder, and the desertion of a host of prominent intellectuals from its ranks over the past few days, threatens to marginalise the GJM. However, this is also a delicate moment for Darjeeling. While various hill parties are jockeying to occupy the political space forcibly occupied by the GJM, and the GNLF before it, for so long, the CPM sees this as an opening to fish in troubled waters. It is the CPM, and the Left Front government in West Bengal it leads, which had not only neglected the hills, but also turned a blind eye to the depredations of Ghising for nearly two decades and allowed Gurung a free run in the hills over the last three years. By doing so, the CPM has long forfeited the right to rule over the hill people. Darjeeling is at the crossroads today, and it is the responsibility of non-GJM parties to steer the future course of events in a responsible, democratic and non-violent manner. The hill people deserve mature leadership and also need to guard against the machinations of the CPM.

Prime Minister Manmohan Singh’s press conference was, by all accounts, a disappointment. The surprise is that anyone should have expected otherwise. If Singh had exceeded expectations earlier, it was because so little was expected of him then. This is no longer the case. But he remains the same man and it is not in his nature to stoke controversy or provide easy headlines. It is then a challenge to the media to get more out of him. And in this, much of the media was equally disappointing. The same question on Naxalism was asked ten times over. Journalists were either congratulating or lecturing the PM when they could have followed up on things he had stated. The PM claimed he would step aside when the party wanted him to, and asserted he was not going to retire. He got away with a shamefaced evasion when asked about A Raja, with no one willing to press the point. Perhaps we should ask questions about ourselves. How were the questions selected? Who decided who would get to ask questions? Was it a random process or were the people handpicked by the media advisor? But then, it is not in our interest to ask questions of ourselves, or of an appointee, whatever his faults, who can bar or provide access. If the lack of vision about the future of the country showed at the end of the press meet, it reflected badly both on the PM and the media, which is supposed to hold him to account.