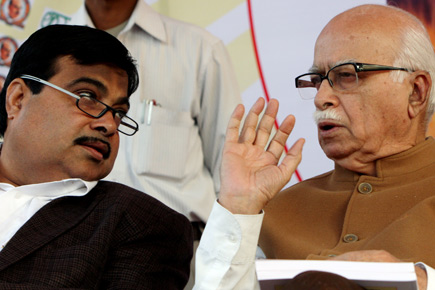 Just before the who’s who of the BJP left for Indore for a three-day meet of the party’s national executive, there were signs India’s principal Opposition party was shaking itself out of its slumber. The exercise, led by newly elected president Nitin Gadkari, also bears the stamp of the party’s big brother, the RSS. Party leaders spent a busy weekend in New Delhi,  just a day after the BJP had held a rally over rising prices. Party insiders say Gadkari is hoping to build up the price-rise agitation to a crescendo before the Budget session later this month. He also wants the BJP to take up other issues concerning the aam admi where the UPA has faltered. A huge rally is planned on the price rise on 25 February in Lucknow, where the party’s brass will be present.

At the same time, the RSS’s stamp is all over the the party’s political agenda and its organisational resuscitation moves. The party observed the death anniversary of its ideologue, Deen Dayal Upadhyaya, in true RSS-style and under the RSS’s watchful eye. BJP leaders were made to attend a workshop on Antyodaya—the party’s vow to fight for the last man in the queue. And the party announced its plans to hold a three-year training programme for party workers—again, RSS style.  Then, RSS leader Suresh Rao Soni went to Indore to inspect the preparations for the BJP meet. This sort of inspection is a first.

After taking charge of the BJP last August and imposing Gadkari as its chief, the RSS has been orchestrating the BJP’s moves. RSS chief Mohan Bhagwat’s remarks opposing Shiv Sena’s ‘Mumbai for Maharashtrians’ call set up Gadkari’s opposition of the Sena. The Swadeshi Jagran Manch led the BJP-ruled states’ opposition to Bt Brinjal. Expect to see more shades of saffron in the BJP’s resurrection plans.

Even before the Supreme Court passes its verdict on the four-laning of NH-7 through the Pench-Kanha forest corridor, the National Highways Authority of India (NHAI) has started work on the Mansar-Kanhan stretch, felling about 500 trees.

With the case coming up for final hearing on 19 February, the Ministry of Environment and Forests (MoEF) issued a note on 16 February to the Maharashtra Chief Secretary to ensure “no felling of trees takes place … till the matter is settled by the apex court”.

What was apparently an open-and-shut case after the National Board for Wildlife and the Supreme Court’s Central Empowered Committee (CEC) rejected the four-laning proposal, soon snowballed into a controversy with amicus curie Harish Salve backing the project in his note to the SC. After an Open expose (Surrendering the Last Frontier, 21 January), Salve was forced to withdraw his amicus note.

During the last hearing on 29 January, Attorney General GE Vahanvati sought two weeks to study the ramifications of the case. Additional Solicitor General Vivek Tankha subsequently claimed “the two ministries (MoEF and Road Transport and Highways) have thrashed out their differences”.  As the ministries play for time, many fear a compromise, in favour of neither conservation nor economics, is being worked out.

During the 29 January hearing, Vahanvati reportedly  told the court that the CEC was in favour of a 9 km flyover instead of the four-laning. But the CEC report categorically recommends an alternative alignment outside the forest. Besides, the NHAI had backed out on the flyover proposal, saying the cost would be prohibitive, and recently submitted an affidavit seeking an alternative route.

However, the apparent misrepresentation of fact by claiming that the CEC favours a flyover and the NHAI’s brazen move to resume work may indicate a possible fait accompli. “Four-laning will cut off the corridor for good while construction of a flyover over two years will disrupt animal movements irreversibly. If we want to protect this key landscape, the only option is the alternative alignment outside the forest,” says Kishore Rithe, a conservationist involved with the case.

Here’s what a senior police officer in Jammu and Kashmir recalls of his meeting not so long ago with a senior Home Ministry official in North Block. “But, officer, can’t we just close the gate at the border?,”  the bureaucrat asked exasperatedly. The question is illustrative. It is more or less the same logic —or the lack of it—that runs through policy-formulation exercises in  North Block. A perfect example of this is the five-level verification process prepared last week for the surrender and rehabilitation of young Kashmiris in Pakistan-occupied Kashmir. According to an estimate, there are about 2,000 of them, who crossed the border in the past two decades and are now stuck there. Some of them are believed to be ready to surrender.

The Centre announced the plan,  at the insistence of the Omar Abdullah government, as a confidence-building measure. While security personnel believe Pakistan might use it as a means to push hardcore militants into the state, some of the levels of the so-called verification process appear downright ridiculous. According to the procedure laid out for the surrender, the youth will be accepted after a background check by the police. How this will be done in the case of a person who has been in PoK for, say, ten years, is not clear at all. But what takes the cake is this: Surrendered militants will have to take an oath before the authorities to reject militancy. The idea that a hardcore militant will stick to his oath is just too simplistic for words.

Also, there are already thousands of surrendered or released militants in the state, and the government has not been able to do much to ensure their return to the mainstream. In some cases, many such militants have rejoined their groups. The need of the hour is to have a clear approach and to introduce measures that can deliver tangible results on the ground. As it is, infiltration has been on the rise in the state in the past few months. In the absence of stringent measures, if the surrender policy boomerangs, the Centre will have nobody to blame but itself.

The revival plan set in motion by the Congress in Uttar Pradesh is threatening to turn one of the oldest and most renowned seats of learning in the state into a hotbed of politics.

If indeed Rahul Gandhi visits Shibli National College in Azamgarh, as seems likely going by the noise in the Congress,  it could well push this institution of international repute into the quagmire of UP politics.

Shibli National College, which came into existence two years before the Indian National Congress was formed in 1885, played an active part in the freedom struggle. Even after Independence, it has remained above party politics, maintaining its secular and progressive character all throughout.
It was in 1883 that Allama Shibli Nomani, a contemporary of Syed Ahmed Khan, laid the foundation of  what was then called National School at Azamgarh. It became a high school in 1916, an intermediate college in 1942, a degree college in 1946, and finally, it was established as a postgraduate college in 1970.

There may be merits in politicians visiting colleges and universities, but it becomes dangerous when an institution with a history of operating in peace is sought to be turned into a political focal point by a party for the sake of votes. Muslims, arguably, are the prized section for the Congress, particularly in the Hindi belt. But there is every possibility that the Congress ‘s bid to use this symbol of learning to appeal to minority voters will lead to a deterioration in its academic standards.

It is also ironic that the same politicians who are now planning to use the college to regain their political fortunes in Uttar Pradesh have never paid any heed to the long-pending demand to grant university status to Shibli National College.