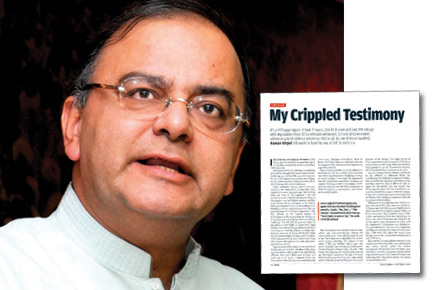 Leader of the Opposition in Rajya Sabha Arun Jaitley quoted liberally from Open during the Rajya Sabha debate on the Liberhan Commission report. The story is written by Raman Kirpal, a senior journalist who had extensively covered the Babri Masjid demolition and was also called by the commission to depose as a witness. “I picked up the 4th December issue, the latest issue, of a new magazine called Open. This journalist has written a two-page article called ‘My Crippled Testimony’,” Jaitley said, flashing Open in the House on 9 December. Quoting extensively from Open, Jaitley explained at length how Kirpal couldn’t submit his testimony in full and was, instead, asked to sign an affidavit prepared by the CBI. Jaitley pointed out how Kirpal, even without disagreeing with the content of the affidavit, wanted to say more and how he could not. “He (Kirpal) says ‘I wanted to say something more’. What was that something more?” Jaitley asked. Relying heavily on Kirpal’s testimony in Open, Jaitley sought to highlight the lacklustre functioning of the Liberhan Commission that took nearly 17 years to complete its task. The BJP leader also maintained that the story was written not by a journalist who has been friendly to his party. “This is not somebody who has any friendly overtones to my party. He (Kirpal) is someone who has severely gone against and given evidence against some of our leaders. It is not against Mr Advani. He says, ‘The moment I wanted to say something about the Central Government and something else, they said ‘just shut up; the answer is only ‘yes’ or ‘no’,” Jaitley said, adding: “This is what has happened in the last 17 years and you want the entire country to believe this kind of a procured evidence!”

Bengal’s famous hangman Nata Mullick, who sent 25 people to their deaths over the past 60 years, died from multiple organ failure in Kolkata earlier last week. The 88-year-old is the third generation of a family of hangmen—his father Shiblal put many freedom fighters, including Master Surya Sen of the Chittagong armoury robbery fame, to the gallows during the British days. Nata, whose real name was Alopriyo, used to boast that unlike his father and grandfather, he only put away convicted murderers and rapists. His last execution was of convicted rapist-and-murderer Dhananjoy Chatterjee on 14 August 2004. This hanging catapulted him to fame and he had been acting in many plays, even inaugurating Durga Pujas all over the state, since then. The hangman’s baton now passes on to his 29-year-old grandson Prabhat.

With the J&K High Court saying that the CBI report on the Shopian case ‘cannot be taken as gospel truth’, the findings have triggered off yet another round of protests and strikes in the Valley. Ruling out rape and murder in the killings of two young women, Neelofer and Asiya, whose bodies were found in Shopian this May, the CBI report says that the women died of drowning. The report findings are based on a forensic report from the All India Institute of Medical Sciences, which says that soil and water were found in the two women’s lungs and other organs. Had it been murder, the forensic report concluded, the bodies would have got airlocked, preventing soil and other material in the river from entering their organs. To support this conclusion, CBI has offered data from the state irrigation department that the rivulet where the two were found dead had witnessed increased discharge of water in that particular month. The family and the Majlis committee that has been leading the agitation has said that it will continue its fight for ‘justice’.

The United Progressive Alliance (UPA) Government’s decision to announce statehood at midnight for Telangana has started more fires than it set out to douse. Amid pandemonium, the winter session of the Andhra Pradesh Assembly, which would ordinarily have gone on till the last week of December, had to be ended abruptly to stop MLAs from resigning.

The protests that the Centre thought would fizzle out are only getting stronger. The Congress’ allies, including the NCP, Trinamool Congress and even the head of its most pampered ally, K Karunanidhi of the DMK, have criticised the Government for its haste in announcing Telangana and acting unilaterally. Tuesday in the Lok Sabha saw Jaganmohan Reddy, the son of the man who delivered Andhra Pradesh to the Congress for a second consecutive time and made the state the party’s strongest hold, join the protest of Telugu Desam Party MPs in the House. The junior Reddy borrowed a placard from the TDP MPs and waved it in front of the Speaker.

Back in Andhra, YS Rajasekhar Reddy’s brother, YS Vivekananda Reddy, is among those who have sat on fasts to demand a unified Andhra Pradesh, while Telangana Rashtra Samiti chief, K Chandrasekhara Rao, whose fast the Congress set out to break with the midnight announcement, says he will wait for Telangana till 2014.

Clearly, things are not panning out the way the Congress would have expected and it has no one else to blame for the mess.  The party has always claimed it stands for a separate Telangana state. In the early 1970s, the party leadership shrewdly got M Chenna Reddy—leader of the first Telangana movement—to merge his Telangana Praja Samiti with the Congress, and then put the Telangana promise on the backburner. This time, with YSR gone, it wanted to use Telangana to get the TRS to merge with it, and hold hands with Praja Rajyam chief Chiranjeevi to gain in coastal AP and continue its political dominance in 2014. But it grossly miscalculated the impact its decision would have.

After YSR’s death, the Congress’ position in Andhra  is not as formidable as it used to be. But with the Assembly and Lok Sabha elections more than four years away, the Congress could have waited a few more hours rather than making an announcement on 9 December after a hurried meeting at the Prime Minister’s residence. That this was done when both Parliament and AP Assembly were in session only compounds the Congress’ folly.

Plot too Thick for Tharoor?

The CPM’s concern about Indian investigating agencies not being allowed to interrogate Lashkar operative David Coleman Headley has found resonance among other MPs as well. This concern should be addressed since it is now emerging that Headley may have been a US agent who turned rogue and joined the ranks of jihadis.

While India lays out a red carpet for the US when it wants to interrogate suspects arrested on Indian soil, the same can’t be said about it. An Indian team which camped for days in the US to be allowed access to Headley had to return empty-handed. On our part, we allowed the FBI to interrogate 26/11 terrorist Ajmal Kasab for nine hours.

This is not the first time the US has denied access to suspects whose interrogation could help India. In July 2002, India was denied access to Afghanistan foreign minister of the Taliban regime, Wakil Ahmed Muttawakil, who had played the role of an interlocutor during the Kandahar IC-814 hijack crisis.
India needs to take this up with the US since it is now also believed that it knew Headley was in India in March 2009, four months after the Mumbai attack. But how serious the Foreign Ministry is about terror threats can be gauged from Minister of State for External Affairs Shashi Tharoor’s remark on CPM’s statement in Parliament that Headley was a US double agent: “How can I say anything about such a comment. I haven’t read novels for a long time,” he remarked.