India in the Time of Gandhi

Historian Ramachandra Guha has stirred up a controversy with his suggestion of a late 1940s collusion between the Left and Muslim communalists in Hyderabad, but the facts don’t justify his claim 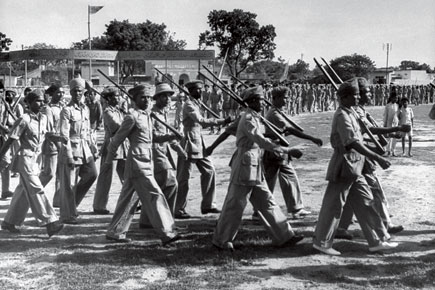 Historian Ramachandra Guha suggests a late 1940s collusion between the Left and Muslim communalists, but the facts don’t justify his claim


History, or certainly its interpretation, is always fraught with risk, but it would seem that one crucial episode of Indian history, the events leading up to the annexation of Hyderabad and the years immediately after, should have been studied well enough for there to be little reason for controversy. But the position taken by Ramachandra Guha in a recent debate with Prakash Karat that unfolded on the pages of Caravan magazine suggests that neither are the facts of the episode known well enough, nor are their interpretations anywhere near settled.

While the debate between the two has more to do with the contemporary situation of the Indian Left, Guha has managed to roil the Left with his controversial remark relating to the Communist-led peasant rebellion that swept through the Telangana portion of Hyderabad princely state at the dawn of Independence. The uprising against the Nizam’s autocratic regime began in 1946. Though the Nizam surrendered to the Union in September 1948 when the Indian Army entered Hyderabad, the peasant rebellion against landlords continued and was formally withdrawn by Communists only in October 1951. For almost a year after India’s independence, the Nizam did his utmost to block Hyderabad’s accession to the Union. Around the middle of 1947, the Nizam, fearful of losing control, sought to play the Muslim card; at his behest, Kasim Razavi, president of the Majlis-i-Ittehad-ul-Muslimeen, created a paramilitary body of Islamic supremacists called Razakars. The Ittehad and its corps of Razakars started a reign of terror to keep Hyderabad an independent Islamic state and the Nizam its representative and symbol of sovereignty.

What Guha wrote in his reply to Karat, published in the November 2011 issue of Caravan, was this: ‘These Islamic supremacists (Razakars) came to the fore in the middle of 1947, whereupon they advised the Nizam not to join the Indian Union. This was a demand the communists were sympathetic to, since they thought an independent Hyderabad would be more congenial to a Leninist revolution.’

In other words, Guha asserts that like Razakars, the state’s Communists also wanted an independent Hyderabad. Contemporary Left documents relating to the Telangana uprising, however, suggest a different reading. Consider, for example, a pamphlet published by the Communist Party of India (CPI) in September 1947, soon after India got independence, titled Tricolour Shall Fly Over Hyderabad. Written by Dr Raj Bahadur Gour, a Communist leader of the peasant rebellion who died only last month (on 7 October 2011), the pamphlet was aimed at offering ‘a clearer understanding of the struggle of the people of Hyderabad’.

The pamphlet, reiterating the stated position of the CPI, says: ‘The Communist Party has pledged full support to the demands of the State Congress. And in any mass struggle that they launch to secure these demands, the State Congress will find the Communists by their side fighting against the main enemy.’ It then states: ‘All fighters for freedom, all genuine patriots, all those who want to fight to the last ditch and wring out power from the hands of the autocratic Ruler, desire a united front—a broad and dynamic united front—consisting of Congressmen, Communists, Socialists and all the progressives.’

Asked about the discrepancy, Guha, in his reply to Open, writes: ‘You quote a pamphlet from August 1947—you must know that in February 1948, the CPI completely reversed its position on the tricolour and on whether India was actually independent. They now claimed that this was a sham independence, and hence their interests became congruent with Razakars’, since Hyderabad would now be their base for a revolution.’

But Guha in his original statement was clearly referring to Communist sympathy for Razakar demands as of 1947. And even if Guha’s contention is taken to stand for a much later date, the facts belie the claim. Communist leaders in Telangana had explicitly demanded that Hyderabad be dissolved and its component parts be merged with the respective linguistic areas, thus creating Vishal Andhra, Samyuktha Karnataka, Samyuktha Maharashtra, United Kerala, etcetera. In November 1947, the Government of India made a standstill agreement with the Nizam. It was at this stage that Indian Communists, feeling cheated, accused the Congress Government in Delhi of ignoring the struggle of Telangana’s peasants. Partly as a response to this agreement, first in its Central Committee meeting held in December 1947 and then in its party congress in February 1948, the CPI decided to fight both the Nizam as well as the Congress.

The decision of the CPI, which has been dubbed ‘adventurist’ and ‘flawed’ by many scholars both inside and outside the party, was never congruent with the self-determination of Hyderabad. Nor was the CPI’s resolve to fight for ‘real independence’ restricted to Telangana—the call was given to develop similar armed struggles in other parts of the country with the slogan, ‘the Telangana way is our way’. Guha’s claim that because of this decision of the CPI ‘their interests became congruent with [those of] Razakars’ does not really have any historical basis.

In fact, support for what is being cited here comes from a contemporary source who certainly cannot be accused of communist sympathies. Wilfred Cantwell Smith, a professor of comparative religion at McGill University, Montreal, travelled extensively in Hyderabad in the spring of 1949 under a Rockefeller fellowship from Princeton University, and wrote an article for the January 1950 issue of The Middle East Journal. His piece, titled Hyderabad: Muslim Tragedy, describes how, besides the actual struggle raging mainly in the Telangana region, a propaganda war had also been let loose by all three sides involved—the Nizam, the Congress Government and Communists—either to malign the rest or to strengthen their own case vis-à-vis that of others.

‘The Nizam’s government, the Indian government and the Communists each at some point accused the other two of working together,’ Smith writes. He explains further how the Congress government in Delhi on one hand charged the CPI of colluding with the Nizam, and, on the other, played up the threat of Communism in India. ‘To the Americans and British, in order to win support for, or at least acquiescence at the United Nations in, their coming ‘police action’ in Hyderabad, the Delhi Government later played up this Communist menace; and indicated privately that it planned to retain the Nizam and his group as a right-wing counterpoise to Communism,’ he writes. Indeed, after the Nizam surrendered in September 1948, he was not removed but made the Rajpramukh (titular head) of Hyderabad—a move that shocked even the senior Congress leader of Hyderabad, Swami Ramananda Tirtha. ‘I wonder why the Government of India was disproportionately lenient to the Nizam,’ Tirtha wrote in his reminiscences, Memoirs of Hyderabad Freedom Struggle.

That propaganda warfare was also an element of the raging battle on the ground and that Communists lost out miserably on that count to the Congress was pointed out in a secret document prepared by Ravi Narayan Reddy, one of the seniormost CPI leaders fighting in Telangana, just before the armed peasant rebellion was formally withdrawn. ‘Looking at the adventurist way in which we were conducting our struggle in Telangana, [the Union Government was] also certain that we will take the mad decision of continuing the armed guerilla struggle even against the mighty army of the Congress. And they wanted to make use of this opportunity to butcher the party in Telangana. They began the necessary propaganda offensive first. They propagated a lie throughout India with the help of their journals that the communists, having joined hands with the Razakars, are fighting for independent Hyderabad,’ wrote Reddy on 15 March 1951—months before the armed peasant struggle was called off—in his critical assessment of the Telangana experience. The note was titled The Naked Truth About Telangana.

But what was actually happening behind the propaganda in Telangana? Smith points out how the Nizam had, right from the beginning, unleashed Razakars on the state’s Communists, often justifying their crimes in the name of tackling the threat of Communism. ‘Squads of armed Razakars terrorized villages, swaggered through streets of the capital city, looted Hindu shops, raided railway trains, molested women, and generally took the law into their own hands. The police winked or applauded. Victims were written off as ‘Communists’,’ he writes. Communist documents are also full of instances of their fierce fight against Razakars as well as the CPI leadership’s applause for its guerilla squads’ successes against the Nizam’s Islamic force. ‘Telangana’s workers, peasants and toilers, who have carried on revolutionary resistance relentlessly against the Nizam and Razakars for two long years and who are now facing the inhuman and cruel atrocities of the Indian military forces—their revolutionary energy, steadfastness, courage and boldness is immeasurable, inexhaustible and limitless,’ says a letter written by the Andhra Committee of the CPI to the Telangana Party in February 1949. Such references are innumerable; going through them is a revelatory experience.

How close then is Guha’s claim to the truth of Telangana?  Not very. That’s the simple answer. At least in this case, the version of the Left seems closer to the truth than the view the historian espouses, a view that appears to resonate well with what the Congress would’ve had the country believe at the time.