In Pursuit of a Collector

A dispatch from Ground Zero of Orissa’s Malkangiri district 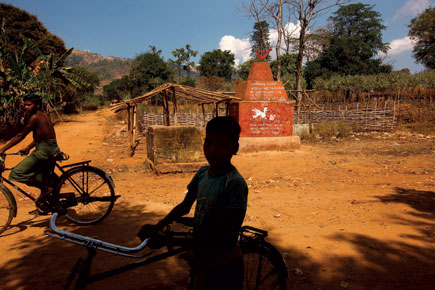 A dispatch from Ground Zero of Orissa’s Malkangiri district


“Light off karo (switch off the light).” The voice from the motorboat that has just landed this side of the Gurupriya River in Orissa’s Malkangiri district is menacing. It is 10 pm on 22 February, and there is news that the kidnapped district collector may be set free. Under a starlit sky, with not a soul in sight, we have been waiting for the sound of the motorboat. But when it comes, there is not much we can do. We switch off the light. In the darkness, three shadows get off the boat and slip away along the Janbai Ghat, not far from the spot where Maoists dealt a deadly blow to the anti-Maoist Greyhounds in 2008 by killing 38 commandos travelling in a motorboat in the Balimela reservoir. But who are the men travelling on the motorboat now? Maoist guerillas, surely. But was the collector with them? We couldn’t tell.

On the morning of 16 February, the day he was kidnapped by Maoists, RV Krishna, the collector of Orissa’s Malkangiri district, had organised a public contact programme at Badapada village across Gurupriya River. From Badapada, Krishna, riding pillion behind a junior engineer on a Hero Honda motorcycle (number OR 02 BC 2771), rode down a non-existent road lined with pillars erected by Maoists in memory of their fallen comrades. He went to Pepermetla village to inspect the construction of community toilets and then to Palem village to take stock of work done on a check dam. A popular administrator with a BTech degree from IIT- Madras, Krishna, unlike his predecessors, often travelled to cut-off areas and always without an armed guard. But this time he was about to become a pawn in the battle between the State and Maoists.

Pushkar (name changed), a resident of Badapada village, had sensed it that very afternoon when he saw seven of a Maoist squad in civilian clothes among the people gathered at the collector’s meeting. Early evening, Pushkar biked down to Jantapai, a small village between Badapada and Pepermetla, home to about 500 people. At the entrance of Jantapai, next to a statue of Mahatma Gandhi and a Maoist memorial, he again spotted a squad of Maoists in civilian clothes. But now they had rifles. Pushkar recognised them. In the organised Maoist machinery, he also figured somewhere along the chain—as a supplier of essential items. They would turn up and ask him to ferry things like rice or sugar to their various camps. They always paid, he says, for the goods they bought, but never for his petrol. Nor did they compensate him for the money he had to spend on his food. “But I never complained because they never troubled me beyond this,” he says. “Moreover, you don’t argue with someone who has a gun.”

While he was still there, they saw Krishna returning on his bike from a distance. He was waylaid by the Maoist squad on a small bridge, not far from the village entrance. It was about 5 pm. One of the guerillas parked Krishna’s bike outside the first house of the village, while the others led Krishna and the officers accompanying him to another corner of the village, where they made him sit on a wooden bench outside a hut with a clock above its main door. He was made to sit there for two hours. Then another squad of heavily armed Maoists descended on the village, and in league with the first squad, they blindfolded and took Krishna and the others away. (Two of them were later released. As Open went to press, the junior engineer, Pavitra Mohan Majhi, had just reached home, but there was no word of Krishna.)

Four days after the abduction, Pushkar is with us, driving us across the same small bridge on his ramshackle motorcycle. He has opened up a bit, which is a big thing. Stony silences are what you normally get while travelling through Maoist areas to get a sense of what is going on. Village after village, people say nothing. They surround you, and while you try to ask them anything about Maoists, they give you vacant stares. If the odd one opens his mouth, it is to rub tobacco on his gums. “Collector babu was a good man, but we know nothing of his kidnapping,” says a villager in Jantapai who calls himself Debu. “Maoists?” another one repeats after our question. “They don’t come here,” he manages. So who built the memorial at the entrance of their village? Debu grins and says: “Woh toh aise hi… (That just happened).”

At least Pushkar is talking a bit. It has taken some coaxing: enquiries about his income, his family, his marriage… and along the way, dropping names of a few Maoist commanders one has met while embedded with them, specially ones known to be active in the area. “Panda yahan nahin hai (Panda is not here),” he says, responding to the mention of Orissa’s most popular Maoist figure, Sabyasachi Panda. Then he gets in a secret conversation with a villager. He returns, saying he will take us to a man—he lives in a village across the stream, Pushkar says, pointing to one end—who is in touch with Maoists. “But let me tell you beforehand, you won’t find anything there now. The collector has been moved from there,” he assures us.

Apparently, two days after Krishna was taken hostage, a large group of villagers from three panchayats, including Jantapai, tried to negotiate with Maoists at a nearby village called Bhimram. It is believed that Krishna was kept there for some time. But sensing the villagers’ belligerence, the Maoist rebels are believed to have shifted him to another camp. From there, he has been shifted at least once more, we learn.

It is like Peepli Live in this part of Malkangiri district. In the past few days, journalists have descended in their hordes, trying to outdo each other to get that ‘exclusive’. Phone numbers have been left with half of Jantapai village in the hope that it may somehow reach the Maoist kidnappers and that this may facilitate some kind of access. “Everyone wants to know where he was kidnapped, where he addressed the meeting, who he met… everything,” says a wonder-struck villager. But it is the local journos, particularly from TV, who are the authorities here on all matters Maoist.

Every journalist from the national press latches on to these local hacks. For them, in turn, it is a matter of pride and also gives them the hope that some help now may pave the way for a better job later. Just like Peepli Live.

That hardly ever happens. Anyway, this is their moment of glory. “I have met Ganapathi four to five times,” boasts one, referring to the Maoist supreme commander. “You stay in touch. We’ll soon go inside,” another winks conspiratorially. But, as we are soon to learn, the axis of every such contact is the man Pushkar has said he will take us to. The man across the stream. He is the man local Maoist commander Prasad is in touch with. It is through this man, we are told, that some food and clothes were sent to Krishna. Sources in the Maoist leadership later confirm this and add that two male members of Krishna’s family were also taken in to allow them to meet the collector.

We meet the man while he is returning from the Andhra border, which is just 5 km away. We talk for a while as he tries to suss out who we are. We leave our phone number and a message for Commander Prasad with him on a big sheet of paper. It already has names and contact details of about a dozen journalists, including the one who said he had met Ganapathi many times over and the one who said we will soon enter the jungles.

We have learnt from high-ranking Maoist sources that on 22 February, Maoist supreme commander Ganapathi held a meeting somewhere close by, on the Andhra-Orissa border. Another senior Maoist leader, Akkiraju Haragopal, alias Ramakrishna, whose wife Padma is one of the prisoners Maoists want released in exchange for Krishna, is also camping in this area. The Andhra-Orissa border (‘AOB’ for Maoists) holds a lot of significance for them. It is from here that Maoists hope to rekindle the fire in their erstwhile bastions of Andhra Pradesh. As of now, this part of Orissa, and many others, are completely under their sway. After the Greyhounds were killed in Balimela, commandos have not conducted many operations in these areas. There isn’t any trace of Orissa Police here. A police camp near Jantapai was shifted more than five years ago, probably after Maoists turned up the heat on it. In most police stations, we are told, policemen don’t even dare venture out in uniform. Inside the moss-covered building of a police station near Badapada, we spot a few policemen, bare-chested, playing cards behind the station main door.

Meanwhile, across Malkangiri, thanks to the frequent shutdowns called by Maoists, there has been a steep increase in the prices of fruits and vegetables. A BSNL pre-paid card with a talk time of Rs 35 costs Rs 300 in the Chitrakonda market, about 20 km from Borpada. The villagers want Krishna to keep his job since he made sure that social schemes introduced by the Government—schemes like NREGS or the widow-pension scheme—were implemented effectively. But in the absence of the State, of which Krishna was a rare representative, villagers dare not anger the area’s Maoists.

Krishna’s abduction has also affected the morale of administrators across Orissa’s Maoist areas. Sources in the state capital, Bhubaneswar, speak of officials trying to work their political connections to get transferred elsewhere.

Krishna’s driver, Shankar Rao, meanwhile, still awaits his ‘Sir’ at Janbai Ghat with his official Bolero jeep. On the day he was kidnapped, Shankar stayed at the ghat the whole night and entire next day. He returned only once he felt ill.

“These are dark times, babu,” a bleary-eyed old Adivasi tells us on the boat we’ve taken to return from Jantapai. “After collector babu’s abduction, who will have the courage to come here and take stock of our lives?” he moans. That reminds us of Krishna’s motorcycle, which is still parked outside the first house of Jantapai. A wilted garland hangs over its headlight— a garland some widow may have offered Krishna in gratitude. The question is: will Jantapai have another visitor who deserves this garland anytime soon? Or even someone who does not?