Doubts have suddenly been cast on the ‘miraculous’ discovery of a new species of macaque in the Eastern Himalayas of Arunachal. The scientists who found it are not amused 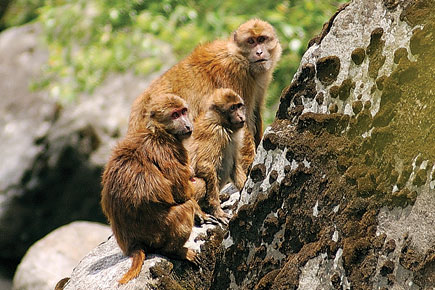 Doubts have suddenly been cast on the ‘miraculous’ discovery of a new species of macaque in Arunachal. The scientists who found it are not amused


About eight years ago, the discovery of a dark-brown macaque species in western Arunachal Pradesh inspired rapturous headlines in Indian and foreign science publications. In a country of 1.1 billion, the headlines said, near-incredulously, the addition of this long-muzzled, short-tailed monkey to the bountiful ‘faunal catalogue’ of the Eastern Himalayan region was nothing short of miraculous. Even The Onion acknowledged the discovery in its own customary droll way, contrasting the finding of a ‘new, delicious species’ ‘informally known as the delicacy ape’ in the Amazon River Basin with the ‘nearly inedible’ Arunachal macaque.

Last month, a new paper was published in the American Journal of Primatology, one that was greeted with diminished enthusiasm. The paper argued that, according to all the evidence on hand, the Arunachal macaque wasn’t sufficiently distinct from the species that it co-habited the high-altitude forests with: the eastern Assamese macaque and Tibetan macaque. They suggested that it could, at best, be considered a ‘local variation’: a sub-species.

The debate is not new. Even Darwin acknowledged in his most famous 1876 work, The Origin of Species, that the term ‘species’ was merely ‘one arbitrarily given for the sake of convenience to a set of individuals closely resembling each other’. Taxonomists say that such debates will continue to proliferate, with increasingly sophisticated levels of available genetic technology and evidence throwing previous watertight categories into question—like the once-ubiquitous grey langur, which is now, depending on which primatologist’s paper you’re most partial to, composed of anywhere between two to six species.

So, is this a taxonomical splitting of hairs better consigned to the dusty archives of primatology journals? MD Madhusudan, a scientist who was part of the team that spotted and described the Arunachal macaque in 2004, suggests otherwise. “It’s a very big deal,” he says. “Just by deciding to go with one taxonomical interpretation versus another, you’ve suddenly created an endangered species.” For instance, the grey langur. It was seen as one indistinguishable blot across India. However, a study published in 2001 has made a persuasive case for its seven subspecies being treated as distinct species, each worthy of separate attention and protection.

“Ultimately,” adds Madhusudan, “it causes you to reflect on what conservation is about—just seeds in a bottle, a deliberation of purely academic interest? Or a question of preserving or sustaining processes like speciation—sustaining the crucible or foundry of life itself.”

Discovery of new species, therefore,  causes a lot of excitement, and the consequences are immediate. It starts with their naming. Sometimes, the species are named for no other reason than vanity or caprice: French naturalist Henri Milne-Edwards named the ‘golden snub-nosed monkey’ Rhinopithecus roxellana after the Ukrainian mistress of an Ottoman emperor in 1870.

Names of monkey species have also been auctioned, the proceeds going towards the upkeep of the new discovery. This is how the Bolivian Madidi titi came to be christened Allicebus aureipalatii in 2004, in honour of the online casino GoldenPalace.com, which paid $620,000 for that privilege. “We were a little more old-fashioned,” says Madhusudan. “This was in reality a re-discovery—the local community, the Monpas, had their own name for it.” This was Mun-zala, meaning deep-forest monkey. “So we named it Macaca munzala as a tribute to them.”

The discovery of the Arunachal macaque had another, more lasting consequence. The same research trip—funded by the Nature Conservation Foundation (NCF)—also recorded the Chinese goral, a species of wild goat, for the first time in India. These discoveries established what scientists already knew: the region’s high-altitude tropical forests sustained a high mammalian diversity. This diversity, NCF advised the Arunachal Forest Department, was in need of protection; faced with human pressures such as poaching and logging.

This led to the founding of a new protected area, the Tsangyang Gyatso  Biosphere Reserve, in 2005. “It’s incredible that we have biological frontiers in a country of a billion, where no landscape is without human interference,” continues Madhusudan. “And it’s incredible that it’s as big as a monkey. Not something hidden in the depths of the ocean or buried beneath the soil, but something that’s been out there for years, raiding crop fields, or watching the Chinese enter Tibet.” This thought is followed up by a more sobering one: “Not only are we losing things, we’re losing things we don’t even know exist.”

“With just 35 troops in existence, it’s on the Red List. Let’s save it anyway,” agrees primatologist Anindya Rana Sinha. It doesn’t help that the animal habitually supplements its largely frugivorous diet with crops raided from local communities’ stores, leading to the occasional retaliatory killing. “And once an animal comes in conflict with the local population,” adds Sinha, “it’s doomed.” Sinha, who travelled in the region afterwards, co-authored a paper providing genetic and morphological evidence to support the macaque’s distinct identity—a stand he sticks to, despite reading the new paper. “It’s a matter of much heat and not much light to say it’s not a different species,” he says.

Sinha adds that the original biological species concept—that comprises those animals that can reproduce and produce fertile offspring—is undermined by the creation of the ‘litigon’, the fuzzy, lightly striped result of a tiger and lion famously produced by Alipore Zoo, Kolkata. Yet nobody would dream of classifying tigers and lions together; they’ve evolved separately over millions of years, and have differences in appearance, geographic distribution, social organisation, and ecological habitat. Which leads to a macaque-related question: if, ancestrally, they’re from the same stock, should they be regarded the same?

Sinha’s contention is a resounding no. “It’s an evolutionary hybrid, but it’s not a recent one—if it were, then you’d expect the parent species to have overlapping distributions, and some to have features of both or either parent species. But they’re homogenous—the Arunachal macaque has a unique pelage colour, tail-length and distribution.” Having examined genetic material from the Arunachal macaque, and compared it with data representing both ‘parents’—mitochondrial for the maternal line and Y chromosome for the paternal—Sinha has an evolutionary theory, which he says is backed by some fossil evidence.

Primatologist Jihosuo Biswas, co-authors of the new paper, disagrees. “Their evidence is inconclusive. Their sample size is too small. Until there is a survey in all of Arunachal and Bhutan, this should be seen as an isolated local variation.” He points out that the data his survey was based on took 4 years to gather, more than it took to describe the species, on the basis of photographic and videographic evidence. Scientists, he adds, are all too eager to declare new species—such as the discovery of the Namdapha flying squirrel, a rare nocturnal species, in 1981. “But there were no follow-up studies, no evidence. I’m not even sure it exists.” So, without further studies to back up the claim, the Arunachal macaque’s separate species status would be, he concludes, a “misrepresentation”.

Praveen Karanth, a taxonomist who specialises in primates, concurs: “The evidence for elevation to species level is not really that strong. They should try to include more individuals of related species, increase the sample size, and gather different lines of evidence.” It won’t, however, be an easy debate to resolve, unlike the grey langur’s. “That should clear up soon—they diverged about 5–8 million years ago, so they have unique morphological characteristics. But the Arunachal macaque only diverged recently: 2.5 million years ago.” Which makes it, he says, “a half-evolved, cryptic species”.

The debate may not go anywhere in a hurry, but one can only hope the macaque gets many millions of leisurely years to evolve.