How to Make a Forest

...with minimum fuss and maximum effect 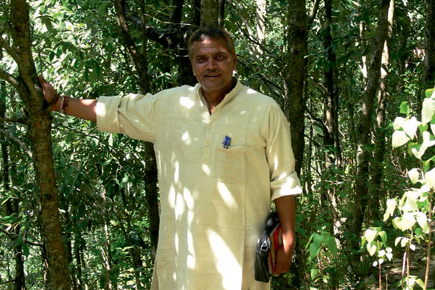 …with minimum fuss and maximum effect


Before their menfolk started migrating out in droves, before rainwater started running off the eroded slopes of the Doodhatoli mountains in Uttarakhand, the people here had suffered an erosion of confidence and dignity. So Sachchidanand Bharati didn’t believe it when he read in 1993 about the region’s age-old water management systems. It was an account of large ponds called taal (like Nainital), small ponds called khaal, and chaal, a string of small, terraced tanks to catch water running off the slope.

If the book was right, the name of Bharati’s village—Ufrainkhaal—meant it was built around a small pond. But there wasn’t one. He went around asking old people, but nobody knew of the existence of a small pond in Ufrainkhaal, 6,000 feet above sea level in the mountains north of the Jim Corbett National Park.

A teacher in the village intermediate school, Bharati had cut his teeth as a young volunteer in the Chipko movement of the 1970s, hanging around environmentalist Chandi Prasad Bhatt. He was well known in the neighbourhood for rallying the villagers of the area against a government logging permit in 1982 to fell the forests that sustained them. His efforts were non-violent and successful: the government had to rescind the logging permit. But the forests were degraded because rain, which was plentiful, ran off the slopes into distant valleys, eroding the soil along the way. The rainwater had to be retained on the slopes.

But there were no accounts to be found of building khaals and chaals to catch the gushing runoff. Bharati decided to experiment with designs and sites in 1993. The hill folk knew their terrain, knew terraced farms and thought, as Bharati found, in three dimensions, unlike the plainspeople. But the water scarcity and the degraded forests had made livelihoods impossible, and the villages were bereft of men, who had gone ‘down’ in search of employment.

Bharati began talking to the women who were left behind. In the first year, they built a chaal on a monsoonal channel that had dried up. After the next monsoon, it retained water longer, the surrounding soil remained moist, the forest looked healthier. Over the next five years, Bharati’s Doodhatoli Lok Vikas Sansthan built several chaals in Ufrainkhaal and neighbouring villages, improving their design through trial.

They had broken free of the vicious cycle of drought/flood—more water meant the forests were getting more dense, which in turn retained even more water. The big test came during the drought of 2000-01. Forest fires are a regular feature in the pine plantations that pass for government forests in the region—pine kills all undergrowth and its needles pile up into a tinderbox. The fires did not spread to the regenerated oak forests, which have soil moisture and diversity. Yet there was the fear that the fires will engulf them, so the village women who had built the chaals turned out in numbers to prevent fires in government forests. Three women died in these efforts. The fire was controlled.

The women guard the forest with their lives. Literally. Their method is remarkable. Guard duty is determined by khakhar, a stick with bells tied on top. Whoever sees the khakhar pitched in front of her house takes the next turn at guard duty. When she gets tired, she goes and pitches it in front of a neighbour’s house. Simple. No duty roster, no register, no grievance. They don’t need official orders or coercion to protect what is theirs.

They also don’t need a budget or an office building or a development project. Their only major expense is on the sweets they distribute at their camps; this is met through donations from friends and well-wishers. Labour is contributed without cost. The annual expenses seldom exceed Rs 25,000.

No need for full-time staff either. Apart from the school teacher Bharati, there are three others who work for this non-organisation. There is Devi Dayal, their postman; Dinesh, a vaidya who practises ayurveda; and Vikram Singh, who runs a grocery shop. All four have to meet lots of people every day. Messages get conveyed and relayed just fine with homegrown IT that mainly resides between the ears, and people turn up to volunteer without Facebook reminders.

Bharati and his colleagues have steadfastly rejected the trappings of a formal organisation. They don’t issue press releases or seek publicity, they do not demand development funding. In fact, they once refused an FAO offer of a grant of Rs 1 crore. The villagers here know a healthy forest is essential to survive, and they revel in being its protectors. When the government offered a watershed development project, Bharati politely refused.

Yet they have built about 20,000 chaals in about 125 villages over the past 19 years—the numbers are estimates, because they don’t go around counting and documenting their work; they just do it, and move to the next task. And they don’t have fancy terms like ‘social forestry’, ‘community forestry’ or ‘Joint Forest Management’ to describe their work either. The largest of their regenerated forests is in Daund, which spans about 800 hectares.

It’s not just the expanse either. The canopy of their regenerated forests is 100 feet high. The humus on the floor is several inches thick. There are birds and wild animals. There is water for the forest, for agriculture and to grow fodder. There is liquidity for all kinds of life.