Home is where the vote is… 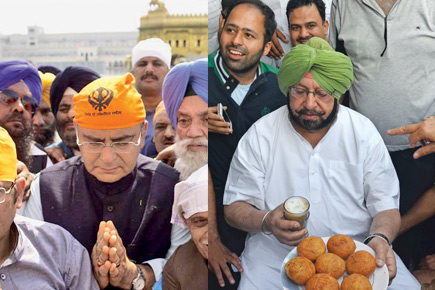 Four encounters with expatriate Indians in the course of a week in Turkey recalled the crucial question—Where is home?—underlying the spat between Amarinder Singh and Arun Jaitley as the curtain rose on the greatest electoral show on earth. An answer of sorts occurs to me amid the olive groves, vineyards and hillsides speckled with ten thousand varieties of wild flowers of Kythera, the Greek island where a retired Australian diplomat of Kytherian origin has built the house where I am writing this. Le Corbusier might have designed his stylish minimalist abode of dark local stone and acres of plate glass overlooking the sapphire sparkle of the Aegean Sea.

His home has followed his heart. But where is home for the 88 ‘undocumented’ Pakistanis whom armed Greek policemen bundled into an aeroplane and dumped in Pakistan? Or for the thousands of Asians and Africans who slipped into Greece to make a new home but are now languishing in detention centres? What did 27-year-old Shehzad Luqman, who had lived in Greece for five years until the small hours one morning when he was stabbed to death as he cycled to work, call home?

The Golden Dawn, an increasingly popular political party committed to an exclusive Greek identity, inspired Luqman’s murderers. It isn’t difficult to sympathise with 11 million Greeks reeling under an economic crisis and burdened with a million outsiders. But who is ‘the outsider’ and who ‘the insider’ in India? The answer can be disastrous for national harmony if it implies a trade-off between growth and secular democracy.

Ironically, Greece’s operation against the unwanted homeless is named after Xenios Zeus, the mythological protector of travellers. Even more ironically, Kythera’s bustling prosperity is untouched by national distress because thousands of Kytherians sent their young children away to Australia where they made good. My friend’s father was only twelve when he was put on a ship bound for Sydney. A humbler version of Sierra Leone’s gaunt Gate of No Return—so hauntingly depicted in Steven Spielberg’s film Amistad—marks the spot where migrants like him said their last goodbyes before walking down to the harbour at Agia Pelagia. The inscription on a cross under a drooping tree calls it the point of tears, welcome, joy and bitterness. My friend was born and bred in Sydney and served in Australian missions all over the world before rediscovering his Kytherian landfall.

I, too, once thought I caught a glimpse of the landscape of atavistic memory in a village grove in erstwhile East Pakistan. It was the site, my father had told me, of an ancestress vowing as the sati flames consumed her that she and her husband would one day return as twins to the same family. Contrary to Nirad C Chaudhuri’s assertion that life’s progression must always be westward, my own perambulations have often taken me east, and fruitfully too. But family legend can be like ‘Shri Ram’ and Ramrajya—myths that distract attention from the obligations and responsibilities of present reality. Some terrains permit no return of the native.

Home has many connotations. Europeans, as the English called themselves in the Calcutta of my childhood, spoke of ‘Home’ and ‘Home Leave’, the latter a status symbol even for Indians. When a European spoke of ‘HOME’ in block capitals you knew that somewhere in the lineage lurked what was called ‘a touch of the tarbrush’. Many years later, Congressmen who deserted Indira Gandhi’s sinking ship after the Emergency called it ‘homecoming’ when they crawled back into her benediction after she regained power. Similarly, and like the Bengali writer who wore trousers under his dhoti in 1857 and kept a sharp watch on the fortunes of sepoys and soldiers, many civil servants, journalists and others are now discovering saffron has always been their favourite colour.

Homecoming can be spontaneously sincere. I read somewhere that visiting a forward army position during the 1965 war with Pakistan, an excited Sardar Swaran Singh began to run towards the glimmer of Lahore. Guns boomed but adolescence beckoned.

Does Manmohan Singh feel a similar yearning for Gah as he packs his bags after 23 years of political asylum in Guwahati? Politicians are today’s kings, and kings die in exile, as Oscar Wilde noted. Perhaps there was a wistful twinge in Pervez Musharraf’s comment during his 2001 visit that if he did not press for Kashmir he might as well buy back his ancestral Naharwali Haveli in Daryaganj and stay back.

But Amarinder Singh’s jibe about Arun Jaitley was misplaced. Patiala’s former maharaja should know that even the most cosmopolitan Punjabi is forever a Punjabi. Amarinder Singh more accurately associated Sonia Gandhi with Uttar Pradesh. Militant feminism hasn’t exorcised the traditional conviction that a woman’s place is in her husband’s home. As for Rajiv Gandhi’s place, the facile charge that he should organise a Festival of India in India too and soak up all it had to offer failed to take into account that Westernisation is an older Indian tradition than globalisation. What sociologists call ‘exile at home’ is only another manifestation of cultural fusion.

That phenomenon has been obscured by the diaspora’s success in mastering two worlds. PIO and OCI cards have turned emigration into package tours and reduced foreign citizenship to passports of convenience. Even while rejecting the notion of a ‘tribal home’, VS Naipaul took an unmistakably proprietorial interest in India. The people I met in Turkey more unashamedly kept the ancestral flag flying with their equivalent of the bed of native earth in which a peripatetic Dracula slept in Bram Stoker’s eponymous novel.

I had thought otherwise until an Indian Singaporean whom I called deracine rebuked me. “When you see another Indian at an international airport, don’t you wonder where he comes from?” he demanded. “So do we!” I wasn’t surprised, therefore, when an Indian woman came up to our table at a pavement café in Istanbul. “Where are you guys from?” she asked, revealing her American orientation. Her husband and son joined her. They were Mumbaikars from Seattle, kindly people whose loneliness generated friendliness.

An observer said of their British equivalent that no matter how many years they spent in the United Kingdom, they lived in India and went to work in Britain. A Polish Jew recreates Alexander Pope’s definition of bliss—‘Happy the man, whose wish and care a few paternal acres bound, content to breathe his native air, in his own ground’—in Israel. An Indian is lost without India.

Diaspora nostalgia provides rich pickings for nationalist organisations. The homesick NRI atones for the comforts of the Western world by working overtime to ensure a US visa for the messiah who claims he alone can rescue Bharat Mata from illegal immigrants in the east, terrorists from the west and Delhi’s foreign usurper. The magnitude of the diaspora’s intervention in the General Election of 2014 will never be known, but the help it undoubtedly extended was another aspect of the eternal quest for home.

The quest can be intensely unhappy. I have often wondered about the unknown Indian whose portrait hangs among the Khmer Rouge’s murdered victims in the grim Tuol Sleng Genocide Museum in Phnom Penh. What happened to the thousand Indians who lived in Vietnam in 1949 according to a recent American history? Sadly, conversation wasn’t possible with the man who was drawn by my Indian features at Paris’s Gare du Nord station. We didn’t have a common language, but I gathered he was from the French-ruled island of Reunion whose Indians are said to be ‘socially Catholic and privately Hindu’. That silent encounter was as poignant as an elderly Bengali asking me in Manchester if mangoes still grow in India. He had gone to Britain before World War II to study law, failed his exams, married an Englishwoman and held a clerical job when we met. He had never had enough money to go back. His wife and children had no interest in India.

The buzz phrase during my teens in England, nostalgie de la boue, yearning for the mud, expressed the longings of a generation that attributed spiritual values to faraway primitives. The mundane convenience of a British passport which could be obtained across the counter in those days was irrelevant to that thirst for redemption. Many years later a British diplomat gave me the status of ‘retired person of independent means’. It was a short cut to citizenship, he said. And, indeed, Heathrow Airport officials assumed I had come to stay the first time I landed armed with that document. “You don’t live here any longer?” they asked in surprise long after I let my privileged visa lapse.

I did so because much as I enjoy spending time there, Britain can never be home. I would have felt a fraud presenting a passport emblazoned with the Royal coat of arms at immigration counters. An acquired passport would have been more of a straitjacket than the one that is my birthright. I would have felt deprived of the moveable feast of memories that keep alive in the twilight of my life the various experiences of youth. I owe something of myself to my birthplace Calcutta, to Benares and Lucknow where I first went to school, to the adolescent battlefields of Manchester, Stockport, Newcastle upon Tyne and London, to Honolulu’s paradise lost, Singapore which so handsomely rewarded my labour, perhaps even to Sydney where I was married. Beyond them shimmers that unreachable ancestral village in what is now Bangladesh.

Each place, even the last, means belonging and acceptance. Each sustains a composite identity that balances anxiety with security and defies a single label. Home is some place one can leave, forget and return to, a place that recognises no difference between one native and another.

It will be a sad day for India if businessmen accept a government’s right to redefine who is a native as the price of development which so often means opportunities for them to amass wealth. Home is where the heart is, but the heart is more than a cashbox. Any equivalent of Greece’s Golden Dawn would destroy the India I am proud to call home.