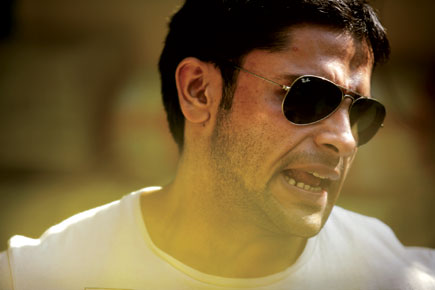 
The last time Rahul Bhatt got close to a break in Bollywood was almost a decade ago when his father Mahesh Bhatt had offered him a role. The two had never got along and Rahul “hated him” for being absent in his life. Then they found themselves booked in the same room in Ladakh when Pooja Bhatt, Rahul’s sister, had invited them both to see the shooting of Paap, her debut film as director. It was the first time in over 20 years that father and son were spending any intimate moments together. Towards the end of this trip, their relationship now considerably on the mend, Mahesh told Rahul that he wanted to launch him in films. The son replied he was keen. His father told him that the name of the movie would be ‘The Blue Film’. Rahul recoiled in shock and said he couldn’t start his career with a movie that had such a title. His father heard him out patiently and never offered him a role again. When ‘The Blue Film’ hit theatres, the title had changed to Kalyug but it starred Kunal Khemu, not Rahul. He was back in the wilderness as an anonymous fitness instructor. Until David Headley happened.

For a man trying to break into the film industry for some time, Rahul, now 31, is in a strange quandary—should he play himself in his debut film? The movie rights to his book, Headley and I, have just been bought by a filmmaker. Co-authored with Hussain Zaidi, the book describes Rahul’s unwitting relationship with Headley, a terrorist who was in Mumbai to do recces that would culminate in the attacks of 26/11 by Ajmal Kasab and nine other Pakistanis. In earlier interviews, Rahul has said he wanted to play his own character—a man who was befriended and manipulated by Headley. Now, after getting over feelings of betrayal and trauma (including 60 hours of interrogation by numerous security agencies), he is having a rethink. He does not want to play victim and believes his personality is more suited to a stronger character—perhaps a Rambo. This is more in tune with the machismo he exudes, an intensity that rises when the subject turns to guns, muscles or secret agents. A huge tattoo strains to break away from his bulging bicep. When he looks at you, his stare is straight, unwavering. It is not intimidating but curious. He seems easygoing, not a complicated man, and that was probably something Headley used to advantage.

Besides, Rahul and Headley, there was Vilas Warak, a fitness instructor. “It was a pretty unusual group—a Black bodybuilder, a White yank who looks like Steven Seagal and me,” says Rahul. Headley had first met Rahul through Vilas at a body-building competition organised by the latter. “He made no impression on me. He looked like a typical American tourist,” Rahul says. The only thing he found interesting was that Headley’s two eyes were of different colours—brown and blue, “like a halcyon”.

From what Headley told his interrogators, it is now known that he assiduously cultivated Rahul because the link with Bollywood got his handlers in Pakistan excited. He began by asking for fitness advice and then kept organising meetings on different pretexts to build the friendship. One of them was a party Headley threw for Vilas’s birthday in which Rahul was the only other invitee. “We spent the entire day hanging around. We saw a movie and the national anthem started. But Headley didn’t get up. Vilas had to force him up,” says Rahul.

One of the most amusing incidents occurred when they once went for lunch to a restaurant called Sea Lounge at Taj Colaba. Rahul writes in the book: ‘The moment we sat down at our table, Vilas said, ‘Yeh behenchod ka bill toh bahut aane wala hai. Dekh le madarchod ki kya haalat hogi! ’ David kept a straight face, eating his sandwich and fries. I glared at Vilas, trying to tell him… the other guests might get offended. But he didn’t stop.

Throughout the meal, Vilas kept using expletives liberally and I was constantly glancing at David trying to gauge if he had picked up any gaalis on the streets of Mumbai… He kept at his meal, laughing and joking…

When the bill finally came, we saw it was over Rs 4,500. When he saw this, Vilas said mockingly, ‘Abey madarchod, itna kam khilaya aur itna bill dikhaya! Saale, humko chutiya bana rahe hain kya! …David, however gave no indication of being able to make out what Vilas was saying…’ But David did understand every word. Because Headley was actually born in Pakistan and his original name is Daood Gilani. Headley’s mother was an American and he moved to the US only when he was 17. It was in 2005 that he had changed his name to David Headley. His Hindi was as good as Rahul’s or Vilas’s. He knew every expletive Vilas had uttered.

What is even more surreal is that Rahul actually saw through Headley. He correctly guessed that Headley couldn’t be a businessman running an immigration consultancy because of his knowledge of guns and intelligence operations. They went to see a movie called Vantage Point, and later, while discussing it, Headley pointed out to him the “security lapses in the movie”.

They shared a “passion for books on military and warfare.” They talked about “crime and criminals, druglords, security measures, military training… the list was endless.” He claims he had imagined Headley to be an American spy. Indeed Headley had been a double agent and informer for the US Drug Enforcement Agency. In Rahul’s eyes, David Headley was a spy, but a “good spy”. Rahul would tease him with the moniker ‘Agent Headley’. Headley tried to get him to stop calling him that, but he kept at it enjoying his discomfort. “He was very situationally aware. If we were sitting [in a public area] and were too loud, he would be careful of our surroundings, about who’s listening. He was very sharp. He could read people very easily. I was absolutely convinced, then and now, that he was a CIA agent.”

There were also temptations Headley held before him. “Luring,” as Rahul terms it, in retrospect. Once when Rahul told him casually about how long his father was taking over launching him in Bolly- wood, Headley asked him how much it would cost to make a movie. When he said about two million dollars, Headley’s response was , “Hey, that’s not a problem at all. I’ll speak to my partner and see if we can raise money for your film.” When Rahul mooted the idea of an executive protection agency, Headley promised to consider a partnership. Didn’t the fact that Headley never said no to him get his antenna up? “What sort of antenna—that he will be a Lashkar-Al Qaeda-ISI guy? I knew he was a CIA agent. I thought he was just trying to be nice. Because he was White, American passport, to me he was a good guy then,” says Rahul.

Vilas Warak came from a family of Shiv Sainiks. Using that connection, Headley even managed to enter Mato- shree, Bal Thackeray’s bungalow, but didn’t get an audience with him. In Rahul’s case, intriguingly, there is nothing that Headley seems to have got out of him. He didn’t make Rahul introduce him to anyone in Bollywood. They chilled out as friends and, in Rahul’s words, “just had fun”.

Hussain Zaidi, a veteran crime journalist, says it is possible that Headley was trying to groom Rahul to be his agent in Mumbai, but he was arrested before they could start on it. Inexplicably, a few weeks before the 26/11 attacks, Headley called Rahul and told him not to go to south Mumbai. Rahul had puzzled over it and shrugged it away. In 2009, Headley called him again when there was a swine flu scare and asked how he was doing. Rahul thinks that at one level Headley did reciprocate his friendship. “He was genuinely concerned. He also said in his interrogation that he went against his training by the ISI-Lashkar by getting close to me emotionally. That’s what he said in court during trial,” says Rahul.

Headley was recently sentenced to 35 years by a US court for his role in the 26/11 attacks. Rahul says it was heart-wrenching that innocent lives were lost. “If I knew and if I could have avoided it, I would have loved to have done that,” he says. When Rahul was born, his father had wanted to name him Mohammed. In the foreword to Headley and I, Mahesh Bhatt writes, “My mother finally prevailed by ganging up with my Anglo-Indian Christian wife and my very reasonable, sage-like Maha- rashtrian Brahmin neighbour, and my son was called Rahul alias Sunny. In retrospect, I shudder to think what would have happened to my son in 2009 if he had been called Mohammed Bhatt.”