It’s been an agri annus horribilis. The crops spared by drought were hit by floods. And now food prices are headed skywards. 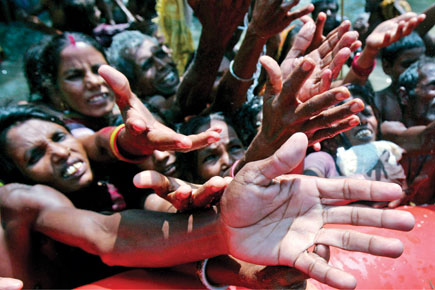 It’s been an agri annus horribilis. The crops spared by drought were hit by floods. And now food prices are headed skywards.


It’s been an agri annus horribilis. The crops spared by drought were hit by floods. And now food prices are headed skywards.

Ramu had warned his children several weeks ago that this was going to be a tough year. So Sachin and his siblings Sushma and Sathish were ready to go without enough food till things got better next summer. They knew they would get less to eat, since drought had forced their father to sow bajra only in a portion of the field. They knew they would not starve once they saw the millet stalks grow taller than them. Hunger pangs were okay, so long as the family could stay together. To Sachin’s mind, it wasn’t such a bad deal after all. Then, on 1 October, life changed forever. The drought-affected block of Ainapur Lambani Thanda was inundated all of a sudden. The family escaped death, but their crop didn’t. Many others in the district of Bijapur in Karnataka—the worst affected in last fortnight’s floods—lost their lives. So far, 31 people have died in the district and the number could go up. In all, over 300 have died in the floods across Karnataka, Andhra Pradesh and Maharashtra.

Ironically, these three states are among the 12 that declared drought in different districts less than two months ago. Officials in many areas were still settling crop losses due to sparse rains when the deluge came. Andhra estimates it lost nearly Rs 13,000 crore as a result, while Karnataka pegs its losses at Rs 20,000 crore. In the three states, estimates of just the agricultural losses could go beyond Rs 4,000 crore.

Those who survived the floods are now staring at starvation and epidemics. Food prices are mounting. Tur dal costs Rs 100 a kg now in Bijapur and neighbouring districts. With the crop lost and gone forever, and no farming possible for weeks ahead, Ramu and his wife Saradha have no option but to migrate to Sholapur in neighbouring Maharashtra and work as daily wagers. They will leave the children behind with their grandparents. Sachin’s worst fears have come true. The family will be separated in this battle against hunger.

Hundreds of kilometres away in north India, Ram Phul Hooda travels some 100 km from his village in Rohtak to reach Delhi. He and his siblings manage a government-run fruit and vegetables retail outlet in South Delhi, one of India’s richest districts. The unit sells tur dal (called arhar in the north) for Rs 70 a kg. “I have managed this outlet for years. Consumers here were never bothered about prices. Now I get more customers asking for arhar dal than for vegetables,” says Hooda. Outside, in a shop a stone’s throw away from his outlet, arhar sells at Rs 100 per kg.

From the day (last month) that the Delhi government announced it would stock cheaper sugar at Safal outlets, Hooda says people have been thronging the shop just to know when that will happen. Sugar sells between Rs 35 to Rs 50 a kg in South Delhi, depending on packaging and label, while Safal outlets promise to sell it around Rs 20 a kg, says Hooda. Household budgets are under strain everywhere. Prices of pulses and vegetables have increased by anywhere between 40 to 80 per cent in the last six months or so. In a nutshell, 2009 has been a bad year for agriculture and since everyone needs food, wherever you are in the country, prices are spiralling.

The drought this year has been particularly bad. “It was beyond our expectations,” says KV Thomas, minister of state for agriculture, consumer affairs, food and public distribution, Government of India. “The receding monsoon brought some relief, and rainfall in the southern states was good. But now, more recently, these have been struck by floods,” he adds.

Despite what seemed like a recovery of the monsoon, the rainfall deficit remains 23 per cent for the season. When things go bad, the Drought Management Division of Ministry of Agriculture prepares a ‘drought situation report’. The latest, dated 7 October, shows that actual rainfall during this year’s monsoon has been less than 690 mm, far below the typically expected 892 mm. Of the 533 districts monitored by the Indian Metrological Department (IMD), as many as 310 districts received deficient or scanty rainfall.

In all, 12 states—Assam, Bihar, Himachal Pradesh, Jharkhand, Karnataka, Madhya Pradesh, Maharashtra, Manipur, Nagaland, Uttar Pradesh, Rajasthan and Andhra Pradesh—have declared drought. “The year has thrown up a peculiar combination of monsoon problems to deal with,” says a ministry official, “There was delayed onset in northwest and northeast India, early onset and long breaks in other parts, and then a delayed withdrawal and extended monsoon, affecting standing crop close to harvest. We normally experience one of these scenarios but not a combination of all. This increases the complexities of management manifold.”

The monsoon this year has behaved rather strangely. Though it reached Kerala one week in advance on 23 May, its advancement to the north soon stagnated for about 10 days and then advanced fast. By the end of June, the deficit had started wreaking havoc. As a result of higher temperatures, vegetables went bad and the yield of milk from cattle dropped. Though the Centre delayed its ‘advanced estimates’ for the kharif season output—as it went to polls in three states, two of them largely agrarian—the sowing pattern points to a dip in output. Plantation of paddy, the main kharif crop, has come down by over 15 per cent from about 388 lakh hectares last year to 327 lakh hectares this time. With exports of non-basmati rice banned since 2007, India produces just about as much rice as it consumes. Edible oil prices have doubled in the last two years and the deficit in supply is met with imports. This year, oilseeds have been sown in about 6 per cent less area than last year (see chart ‘Kharif Sowing’). Officials in the ministry say they are yet to account for the flood losses. “It is too early to talk about damage in the flood-affected states. There can only be a relative estimation,” says SK Dutta, deputy director general, crop sciences, ICAR. Officials point out that state governments are still busy providing food and shelter to those displaced or rendered homeless in the floods.

India receives nearly 85 per cent of its annual rainfall during the monsoon. Things are only going to get worse in the coming months. While much is being made about the recovery of the receding monsoon, as of 1 October the live storage in 81 water reservoirs across the country stood at only 60 per cent of full capacity. “Expect large-scale migration from rural areas to urban areas by March next year, as the combined effect of droughts and floods begins showing on farmers,” says Bhaskar Goswami, food and agriculture consultant. “In Karnataka, it has already begun on a large scale,” Jayakumar Christian, national director, World Vision India, tells Open over the phone from Bijapur, where he is overseeing rehabilitation of families displaced by floods. “The crop was near harvest when the floods came. And now, fields are not ready for the winter crop,” he says. It is estimated that nearly 30 lakh hectares of standing crop was destroyed in Andhra and Karnataka. In the latter, nearly two-thirds of the state’s sugar mills have had to delay crushing sugarcane due to floods. Sugarcane loses nearly half its juice if it is not crushed within a week of being harvested. Sugarcane plantation in the country this year has been lower than last year’s by 2.5 per cent. Though India has declared it will import sugar if need be, things in the international market aren’t going to be easy either. Brazil, the world’s largest producer of sugar, has already declared that it will produce 2 million tonnes less than its previous forecast of 31 million tonnes. World consumption of sugar is projected to outstrip production by 4 million tonnes.

“When India declares it is going to import, world prices go up. Forward trading is the main culprit behind food prices rising. Blame it on the Government,” says agriculture and food trade policy analyst Devinder Sharma. But the Government would rather blame it on the states, or others. “Black marketeering and hoarding are the main causes for price rise. We have banned the export of wheat. The Centre can only show the steps, the states have to implement things,” reasons Thomas. “Action has been taken against only smaller traders by the states, not the really big fish,” he adds. Any which way, what he doesn’t say is that prices are going to come down. No matter what the official ‘inflation’ figures are, everyone knows they will not.