The governments of deluged Andhra Pradesh and Karnataka have been hurling blame around. Thankfully, there were actual rescuers at work too. 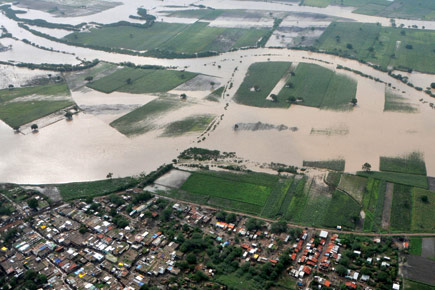 The governments of deluged Andhra Pradesh and Karnataka have been hurling around blame. Thankfully, there are rescuers at work too.


Heavy rains and overflowing dams combined to create one of the worst disasters faced by Andhra Pradesh (AP) and Karnataka over the weekend, displacing millions and flattening homes, inundating fields and washing away cattleheads. The official toll, 197 in Karnataka and 63 in AP, may not paint the true picture of the catastrophe, given the large area under water. The reason for the low casualty rate has been attributed to the slowly rising levels of water that gave millions the chance to abandon everything and reach for higher ground. As Annapoornamma in Kurnool town says, “We just rushed out in what we were wearing. We took shelter in a neighbouring tall building for two nights. It rained heavily outside and water entered the third floor. We were starving all the while.” When she and thousands of others descended after the water receded, they found all their belongings—clothes, utensils, electronic items, furniture—washed away and their houses full of brackish water. Over 300,000 houses were destroyed in both the states.

Politicians and officials waded into the flood waters with gusto to blame each other. AP’s Chief Minister K Rosaiah blamed Karnataka for releasing water from its dams, and that state, in turn, pointed fingers at Maharashtra for releasing the Krishna waters. It was poor coordination between the three states, none of which had braced itself for such an eventuality.

It is true that the deluge due to flash floods in Karnataka surged into AP. While Karnataka’s districts were water-logged, and thousands of marooned people cried out for a lifeline from their precarious perches, the Karnataka Cabinet was attending a camp between 29 September and 1 October. By the time they got into action, the floods had reached AP, which was caught unawares by the rains and the rising river waters that inundated several towns and villages on the Tungabhadra and Krishna river banks.

Though rains stopped on Sunday, water levels continued to remain above danger levels in AP. It was only by Tuesday that water discharges were in control, and fears receded of Vijayawada town getting submerged because of the flow from Srisailam Dam. But now, the grim task of feeding and sheltering over 20 million people in both the states looms large.

The two governments, after initial rounds of setting up gruel centres and relocating the affected millions into relief camps, also face a more worrying issue: to prevent the spread of epidemics and rebuild lives. Karnataka has asked the Centre for Rs 10,000 crore in assistance, and AP, Rs 6,000 crore, as immediate relief. As north Karnataka is a huge base for the BJP, Chief Minister BS Yeddyurappa is trying his best to start relief measures immediately.

The flood temporarily put to rest the political uncertainty in AP after YSR’s death and K Rosaiah moving into the CM’s office. But Rosaiah will have to show more imagination than resilience in the coming months. There is still the task of rebuilding the lives of the people of six districts whose houses were washed away and acres of crop destroyed. In the affected AP areas, onions already cost Rs 90 a kg, and for a state that prided itself in dispensing rice at Rs 2 per kg, the staple has shot up to Rs 50 per kg in the open market.

It all started with heavy rains in Bijapur, Bagalkot, Bellary, Dharwad and Gadag districts of Karnataka and parts of Kurnool and Mahboobnagar in AP on 30 September. The heavy rains fed the two major rivers in the area—Tungabhadra and Krishna—that passes through north Karnataka and enters AP. With reservoirs full and catchment areas receiving excess rains, the world turned topsy-turvy for millions in the space of a day.

For the record, the retreating southwest monsoon over north Karnataka, actively aided by a Bay of Bengal depression over AP, led to the highest rainfall this October. This is ironic, as even a few weeks ago, these districts—15 in Karnataka and six in AP—were declared drought-hit. It took two days of heavy rain to change the shimmering landscape into a watery estuary, with miles and miles covered with vast sheets of water that submerged the famous Mantralayam temple in AP, a first in its centuries of existence.

A family from Bangalore that had gone to Mantralayam took shelter on the rooftop of a three-storey building. A survivor said the next morning they were shocked to see the temple completely submerged. One of those who took shelter on the roof, along with his relatives from Madurai in Tamil Nadu, SMSed Union minister MK Alagiri, after which help came in the form of boats. Nirmala Urs, a 65-year-old from Mysore who survived the ordeal, died of a heart attack as soon as she reached her Mysore home.

In Karnataka, 15 districts were immersed in water and villages were cut off as bridges tumbled, retaining walls breached, roads washed away. If thousands were saved, it is all thanks to the Indian Air Force and the Army, which worked along with the National Disaster Management Agency and local rescue teams.