Stealing sperm, trying to rob the Reserve Bank of India, selling a stolen motorcycle back to its owner… these criminals are so stupid that they are an insult to crime 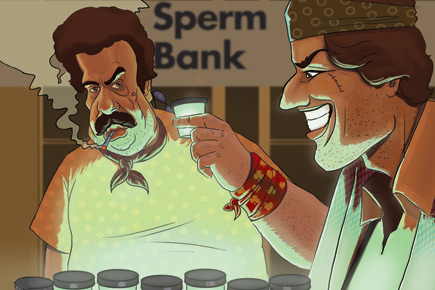 Stealing sperm, trying to rob the Reserve Bank of India, selling a stolen motorcycle back to its owner… these criminals are so stupid that they are an insult to crime


In 2008, Dr Suryakant Hayatnagarkar, director and co-founder of Cryocell India, received a call from a police station in Mumbai. Dr Hayatnagarkar’s firm, which is based in Maharashtra’s Jalna district, runs six semen banks in the country. He remembers the discomfort of the police officer on the line. It was no ordinary news he was relaying.

“Dr Suryakant, we have caught a man in Bombay. And, hmmm… have you been robbed recently?” he asked. The doctor told him he had not.

“Well sir, the thing is, he is carrying a huge canister… We’ve never seen anything like it. And, ermmm…” Hayatnagarkar was perplexed. What might it have had to do with him? He remembers his impatience. He’d said something to the effect of: “Go on, get on with it.”

“The canister has semen. Over a hundred vials. He has robbed your sperm bank.”

Hayatnagarkar was shocked. Who would rob a semen bank? What use could it be? Surely, no one could sell it. Over the next few days, as the police of Mumbai and Jalna got involved, he learnt that the accused, Anil Mohite, along with his brother, Sunil Mohite, a lab technician at the firm, had looted the Aurangabad sperm bank of 101 vials of semen. Sunil had devised the plan after having seen how large numbers of semen samples were being sold to infertility clinics across the country. However, selling stolen semen is not easy. Many infertility clinics have their own sperm banking facilities, where they maintain records of sperm donors and do not welcome anonymous semen.

The criminals, however, went purely by numbers. Cryocell India sells samples to several infertility clinics registered with them for Rs 630 a sample. According to Hayatnagarkar, a canister of 101 vials would be worth over Rs 63,000. Sunil had sent Anil with the stock of semen samples to Mumbai with instructions to locate an infertility clinic and sell their entire heist for not less than Rs 25,000.

The case is currently in court. “I would like to believe that they had some plan of selling the samples,” says Hayatnagarkar, “[Else], they were really very foolish.”

Every profession has its stalwart and dimwit. For every criminal mastermind enjoying the ill-gotten rewards of his ingenuity, there is an idiot staring out of the bars of a jail cell. In the US, stories of dumb criminals are a genre by itself. It is not just the staple of local crime coverage, there are magazine articles on it, TV shows that rate the week’s most moronic attempts at breaking the law, and even books with titles like The Stupid Crook Book. Among the most amusing stories of recent years was the case of a Spanish robber who broke into a funeral parlour. The incident took place in 2008 in a town close to Valencia, Spain. When the police showed up, he tried to play dead by lying in a glass chamber that is used to view the deceased. According to AP, the suspect’s ‘grungy clothes’ and heavy breathing gave him away. In another incident about a year earlier, two 18-year-olds vandalised and burgled a children’s campsite. They would have gotten away. Except that one of them, Peter Addison, scribbled ‘Peter Addison was here’ on a campsite wall. He was identified and arrested.

In the past few months, Mumbai has had two botched-up jobs. This April, a man tried to enter the Reserve Bank of India’s headquarters on Mint Street with an air gun. Alarmed, the police braced themselves for a terror attack. But they later found that they had taken the armed would-be intruder, Padma Shekar Nair, a little too seriously. Assuming that the bank was stuffed with cash, Nair had only wanted to enter the building to rob it. A few days earlier, he had even written his mother in Kochi a letter saying that he would soon return a millionaire. And just last week, there was the ghastly case of a kidnapped and murdered 13-year-old boy, Aditya Rankha. It was solved not by the dint of any policeman’s intellect, but thanks to the perpetrators’ stupidity. The accused were both known to the family. One of them, Bijesh Sanghvi—believe it or not—actually chauffeured the victim’s father and a policeman to the spot where the victim was last seen. During the car ride, the boy’s father noticed that his son’s slippers were tucked under the backseat, and there were bloodstains in the boot. Sanghvi was arrested.

Pandharinath Mandhare, a senior police inspector in Pune, has an observation to make on criminals. His 36 years of police service, he says, have taught him that the odd criminal will be smart but the rest are incredibly stupid. “It is the nature of this field,” he says, “If you are smart, you will be doing something else.”

Yet, even such sagacity could not prepare the senior inspector for the case of Jeevan Sadhu Shedge’s missing motorcycle. In November 2010, Shedge, an infotech employee based in Pune’s Hadapsar, approached the local police station where Mandhare was posted with the complaint of a missing motorcycle. Like always, Shedge had parked his Bajaj Platina in a lane outside his home. One morning, he discovered it missing. Mandhare took down the complaint but told Shedge that it was highly unlikely that his bike would be found. There had been over 230 cases of missing bikes in Pune that year, and none had been recovered. Two days later, Shegde started looking for a second-hand bike. He made a few calls and eventually got in touch with a local mechanic, Naim Rahim Shaikh, who was looking to sell a motorcycle. “Jeevan met the mechanic to check out the bike,” recounts Mandhare, “It was a Bajaj Platina, and looked remarkably similar to his lost possession. Jeevan even jokingly wondered aloud if Shaikh had stolen his bike. But when he inspected it further, Jeevan realised that the bike didn’t just look similar, it bore the same stickers and number plate.” Shedge was so surprised that he yelled out that the bike belonged to him. Shaikh raced away, and by the time Shedge reached the police station to complain, another half hour had passed.

Mandhare hopped onto his motorcycle, and, with Shedge riding pillion, the two started looking for Shaikh. “There wasn’t much hope of finding him,” says the cop, “I was just amused by the fact that a thief had tried to sell a bike to its owner. But we continued to ride in the direction that Shaikh had taken. A few kilometres away, we saw, by a tea stall, Shaikh sitting on the bike, drinking a glass of tea.”

In 1987, when Mandhare was a constable posted at Bombay’s Pydhonie police station, he helped a resident of Masjid Bunder recover a stolen car audio set. After losing it, Mohammed Ibrahim had tried to find a second-hand replacement in Chor Bazaar, only to find his own item being sold back to him. Ibrahim paid a small token sum, promising to return with the rest of the cash in a few hours. Mandhare accompanied him the second time round and arrested both the owner of the store and his lackey who would steal car stereo sets for him.

A credit card is not an easy steal. It is almost always kept in the inner reaches of a wallet. To get hold of one, you usually have to pick an entire wallet. Then, unlike cash, there is always the possibility that the cardholder will block his card. But if you find a cred it card wrapped inside a bag lying by a busy road, it is almost like a gift. In 2008, three unemployed slumdwellers of an area near Mulund in Mumbai found an ICICI credit card bearing the name ‘Shah Rukh Khan’ lying on a pavement in Santa Cruz. According to Prakash Landge, a senior police inspector at Mulund police station, Khan had lost it along with his passport during a film shoot in Santa Cruz a few weeks earlier. The three finders—Vinay Vijay Tambe, Shekar Jadhav and James Paul Peremal—decided to play keepers and buy themselves a few clothes and watches with the card.

They shopped at a mall in Mulund and ran up a bill of about Rs 25,000. Up till this point, you would still have to call them lucky.

Recalling the incident, Landge, who investigated the case, says, “The man at the sales counter was struck by the name on the card, it being the same as that of the actor’s. But then one of the accused signed and handed the charge-slip back with a signature that read ‘James Paul Peremal’.” The man at the counter did not just smell a rat, he smelt three big imbeciles. The police were called in, the three were arrested, and to the surprise of all, the credit card actually turned out to belong to the Bollywood superstar.

However, the most bizarre story of stupidity has to be this one from the country’s capital. A copper wire thief spotted an opportunity in the auxiliary power substation of Delhi Metro’s Barakhamba station, one located at the end of the station’s platform. Equipped with a torch and hacksaw, he set himself to work upon a live copper wire that had 33 kilovolts of electricity running through it. When his body was found a few hours later, it was burnt so badly that no one could identify him.

There had lately been several reports of copper wire theft, says Delhi Metro spokesperson Anuj Dayal. “Most thieves were wise enough to steal discarded wires,” he says, “In this case, I think the robber must have been a substance-abuser who was so high he did not realise what he was doing. I can’t find any other logical reason.”

Whole Mandhare never saw Shegde after the motorcycle incident again, he continued to bump into Shaikh. Out on bail, the thief would have to visit the police station every few days. Later he found employment as a mechanic in another garage. The senior inspector and his fellow cops would tease Shaikh each time they saw him. “We would tell him, ‘Chootiyaa, naak katwa dee na, choron ki?’” (You’ve sullied the reputation of all thieves, no?)