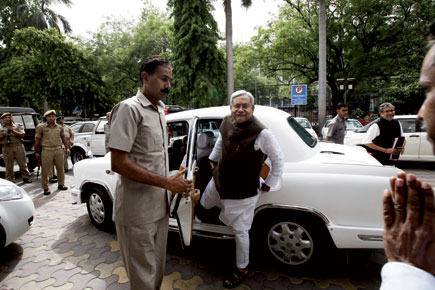 Those who litter newspapers and social media with their instant punditry are on an overdrive, predicting the potential of a ‘third front’ to queer the pitch for the BJP and Congress in the upcoming General Election. What has set off this round of opinion-spewing is Bihar Chief Minister Nitish Kumar’s assertion that his Janata Dal United (JD-U) is approaching the polls as part of the secular column and that his forces would move in lockstep with Malayam Singh Yadav’s Samajwadi Party (SP) and Deve Gowda’s Janata Dal-Secular (JD-S). Some of these over-enthusiastic commentators have concluded that Nitish Kumar’s move will encourage ‘unattached’ political parties to arm themselves and take up offensive battle positions against the main contenders for the throne in Delhi.

Trained eyes, however, are unlikely to be distracted by Nitish Kumar’s hyperventilation over the imminence of this Third Front. For, past experience—from the first experiment in 1967 to the last in 1996—has shown that apart from ambition, an ideological glue and a wide geographical catchment area are critical must-haves in putting together an alternative front. In 1967, it was their desire to take on a powerful Congress that saw non-Congress players converge on a common platform; in 1977 it was the in-your-face excesses of Indira Gandhi; and in 1996, it was their anxiety to arrest the ascendancy of the BJP that led to the formation of a third alternative called the United Front.

The latest attempt-to-be fails in all three departments. The three political leaders who have decided to float the platform are no longer unchallenged leaders in their respective states; they face stiff challenges of political survival on their home turf. Only a day before Nitish Kumar made his announcement, two retiring Rajya Sabha members declined his offer to contest the forthcoming Lok Sabha polls. One of them, Shivanand Tiwari, went to the extent of saying that Nitish Kumar, who has “hubris as his calling card”, had a low approval rating as the CM of his home state. Besides, the resignation this week of his cabinet colleague Parveen Amanullah, daughter of Syed Shahabuddin, as minister and a JD-U member is a big blow to Kumar amid intense competition from Lalu Prasad’s Rashtriya Janata Dal (RJD) for Bihar’s Muslim votes.

The other two leaders fare no better. The SP, which won a landslide less than two years ago in the Assembly polls of Uttar Pradesh, is under siege in India’s most populous state with one of its main voting blocs—Muslims—distancing itself from the party. Mulayam Singh Yadav’s son, Chief Minister Akhilesh Yadav, has been unable to assure voters of responsible governance; this makes the party vulnerable to major losses in the polls due this summer.

There cannot be any quarrel with the assumption that political compatibility will be an important question for the proposed Third Front to move beyond the trio of Nitish, Mulayam and Gowda. Every recent electoral tracker has shown three chief ministers sending sizeable numbers to the next Lok Sabha: Mamata Banerjee of the Trinamool Congress from West Bengal, J Jayalalithaa of the AIADMK from Tamil Nadu, and Naveen Patnaik of the Biju Janata Dal (BJD) from Odisha. Apart from them, Jagan Mohan Reddy of the YSR Congress is expected to do well in Seemandhra. Of these regional leaders, everyone has cohabited and shared power with one of the two national parties at some point or another, as has Nitish Kumar himself, and so his claim that the unattached “share the same values” stretches credibility.

Given that context, it was not surprising of Jayalalithaa to stonewall a query on her national posture after the General Election. After finalising an alliance with the CPM, Jayalalithaa clearly told reporters that the issue of this alliance’s PM candidate—and by extension, her party’s stand on the post-poll scenario— was yet to be decided. “This is not the time for anyone to discuss and decide who the next Prime Minister will be,” she said, “It is pointless for any political party to [address] this question now. It will be arrived at only after the election results are out.” Put simply, she has kept her options open, and her party’s stance will likely be dictated by the numbers that the principal contenders mop up.

Mamata Banerjee and Naveen Patnaik are in no hurry to bare their cards either. Although they have periodically made claims of envisioning a ‘federal front’, they do not share the anxiety displayed by Nitish Kumar and Mulayam Singh to retain their political relevance.

“What Nitish Kumar did was unveil a banner for proclaiming his relevance. His own partymen have begun doubting his ability to achieve much to become a player on the national stage,” said BJP spokesman Ravi Shankar Prasad. One can’t be blamed for assuming that the Front proposed by Nitish Kumar is a group of losers simply because a third front can be relevant only if the four regional parties expected to perform well—the TMC, BJD, AIADMK and YSR Congress—stick together. And that’s not happening.

The YSR Congress, which is seen as a major force in Seemandhra, has made it plain that its future course will not be dictated by ideological considerations but by factors that aid the party’s growth. “I am not against Narendra Modi,” Jagan Mohan Reddy has said, “We will back the party that will oppose the bifurcation of Andhra Pradesh.” For its part, the BJP has begun nuancing its position on Telangana—from its support for this new state’s formation, the party is now talking about ensuring justice for both parts of Andhra.

Political observers too discount the possibility of a surge in favour of the so-called Third Front parties, especially with the Left Front appearing so weak in its traditional regions of influence. “There is a discernible anti-Congress mood in the country and this was reflected in the recent state elections,” says Professor Badri Narayan, social historian and cultural anthropologist at Allahabad’s GB Pant Social Science Institute, “The Congress suffered humiliating defeats. This clearly shows that anti-Congress votes can be garnered only by a force arrayed against the grand old party.”

With Narendra Modi’s quest for prime ministership gaining traction, the polarisation of votes is sure to get sharper still. While the BJP is attempting to move beyond its core constituency and win over Other Backward Classes and newly-empowered economically weaker sections among them, several regional parties that operate in the field of identity politics are expected to face trouble. Besides, Muslim voters, who are determined to exercise a veto of sorts against Modi, can be expected to back parties that are equipped to defeat the BJP in their respective constituencies. In such a scenario, a new front has no place, even though individual parties could. But then, India’s bigger regional parties have a record of placing their self-interest above issues such as authoritarianism, secularism and economic policy that have served as ideological adhesives in the past.