Mihir Srivastava ventures into the clandestine satta bazaar, a political betting market where the stakes are as high as $2.5 billion. And guess who’s a safe bet? 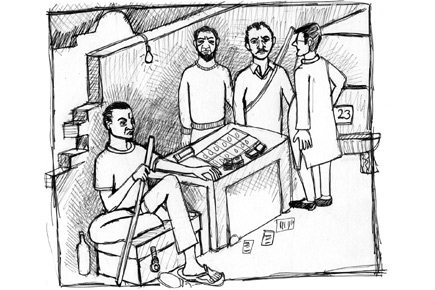 Mihir Srivastava ventures into the clandestine satta bazaar, a political betting market where the stakes are as high as $2.5 billion. And guess who’s a safe bet?

It looks like any other small-time real estate agency in Delhi. The office is modest, with the usual charts and props. Look around, and you spot an iron door. It leads from the office to a dark hall—a venue for sattabaazi. It could be mistaken for a cheap bar, bulbs dangling above square wooden tables surrounded by anxious people, the air damp and heavy with the smell of liquor. Listen in, and you hear the sound of bets being placed.

But this is not a den for gamblers. Most of the people present are acting on behalf of others. “The betting originates somewhere else… we do not know where,” says the 30-year-old ‘ginni’ (literally ‘gold coin’, a common term for a satta operative in the city), back in the real estate office. He is a wrestler too, and is pleased to see business pick up as polls approach. He gets about 5-10 bets a day. Whenever he is informed of one—usually via SMS—he puts it into play, preparing a ‘game’. This means he collects the cash, mostly sums between Rs 5,000 and Rs 50,000, issues payment slips in exchange, and then sends all his collections to ‘the company’. Which one, he won’t say, but it’s known that Delhi has six major ‘companies’: the Delhi Bazaar, Ghaziabad Bazaar, Gali Bazaar, Faridabad Bazaar and Dishawar Bazaar. Once the results are out, it is also his job to pay the winners what’s due to them.

By the way the wrestler-ginni dresses— in soiled clothes, the top buttons of his shirt open even in Delhi’s chill—one wouldn’t guess that he drives a Honda City. The satta business is lucrative. He gets a commission of 10 per cent on the amount he collects as bets. The catch is that he has to share his cut with local cops. “The police nearly take half of it,” he says, “All illicit businesses in this city are run with a nod from the police.”

The Indian satta bazaar is abuzz with excitement. This promises to be a general election like none other. By the time it’s done, an estimated Rs 15,000 crore ($2.5 billion) worth of illicit bets will have been placed. The fortunes of candidates, parties, alliances, just about everything electoral is up for speculation. As with any other market with thousands of participants, the going rates are indicative of popular expectations.

So, what does the bazaar have to say? Broadly, that Narendra Modi is a safe bet. The market is upbeat on the BJP candidate’s prospects of taking over as India’s next Prime Minister. In Delhi’s satta bazaar over the weekend, this bet is being quoted at odds of ‘1.5’: that is, if you bet Rs 10 on it, and he becomes PM, you get Rs 15 back. In contrast, the odds are stacked against Rahul Gandhi, with a bet on his becoming PM cited at 7.5: if you wager Rs 10 on this outcome, you get Rs 75 back if it actually happens. If the Congress leader’s chances seem grim, consider the odds being offered on this election’s enigma, Arvind Kejriwal, as PM: just above 10. Anyone who dares a bet on an AAP-led government at the Centre would get ten times that sum if it materialises.

The BJP’s chances of securing a majority in the Lok Sabha are also seen to be bright, with odds of 1.8 on offer. On this count, the Congress is seen to be far behind, its figure hovering around 8. There are many other kinds of bets political gamblers can place, and the odds are likely to shift as polling draws closer and palms are rubbed with increasing anticipation.

“It’s ironic,” says a Janakpuri bookie who runs a monthly betting business of Rs 50 crore, “Punters are going to make the most if Kejriwal becomes PM, since the odds in his favour are slim.” But “if he comes to power, the whole satta bazaar will suffer”, he adds, given the tough stance taken by AAP against black money, which this market thrives on.

The bookie, a lawyer by profession, claims to have donated lakhs of rupees to AAP, but is disillusioned with Kejriwal: “He meekly surrendered by resigning as Delhi CM.” Yet he claims he doesn’t let his political views interfere with his satta acumen. “The surprise package is now the third most likely candidate for the top job,” he says, referring to the AAP leader. On Rahul Gandhi’s chances, he erupts in laughter. “The shehzada’s fate is anybody’s guess.”

Cabbie is a tour operator who doubles as a bookie every election season. He lives in Greater Kailash-I, boasts an engineering degree from a university in the UK— where he drove a cab for five years before returning to India—and uses the internet for his betting operations. Seated in his travel agency’s office in Connaught Place, he credits his understanding of Indian politics for his success in the satta bazaar. “Most of the bets originate outside India,” he says. Where exactly? “Nobody knows,” he replies.

In Cabbie’s reckoning, political punts this year will be five times the sum of all cricket bets. He offers no figures, just makes comparisons. The money at play, he figures, is ten times the Election Commission’s budget for conducting the polls (presumably higher than the Rs 1,200 crore spent in 2009); satta money will shoot up now that election dates have been announced, and then keep rising.

He speaks at length about his business and high-profile clientele. “Dozens” of politicians, he claims, are his clients— leaders of the Congress, BJP, SP and other parties who find the satta bazaar both engaging and informative. As a way to keep tabs on popularity trends, they know, the market is more reliable than opinion polls that appear on TV.

Many politicians are a “spent force”, quips Cabbie. Staring at defeat, they are trying to make the most of a satta opportunity now. “Many of them will put money on the success of opponent parties and rival candidates once the list is out,” he laughs, “It’s a good strategy. If they don’t win votes, at least they’ll win some ready cash as consolation.”

Peripheral parts of Delhi such as Mangolpuri, Timarpuri, Sultanpuri, Jahangirpuri and Trilokpuri form key nodes of the vast satta network. These are shadowy venues where thousands of people make daily bets. They can place bets at all times of the day, but the busy hours are between 6 pm and 8 pm, when punters drop by on their way from work. For most, it’s just another form of entertainment, something to break the monotony of their daily routine—with the chance of winning extra cash thrown in.

For those who ply the trade on the ground, it’s serious business. Mangolpuri, for example, has as many as five satta venues, each in fierce competition with others. They operate under the aegis of local mafia groups. Speak to satta operators, and they start running down the modus operandi of their rivals. There have been several clashes among them in the past, some of them violent. Guns have been fired and lives lost over territory battles. “Last month alone, there were five murders in clashes to fix domains for satta operations in Delhi,” says the wrestler- ginni. Three of the five who died were from his hometown of Morena in Madhya Pradesh. “The police didn’t register complaints because no one formally approached the police,” he says.

Seated in his real estate agency office, he sounds almost preachy when he talks of how the satta bazaar shapes public opinion for the better. The office is not far from Delhi University’s north campus, and he says his team has several students, mostly youngsters from Bihar and Uttar Pradesh. Among them is S Singh, a 27-year-old college dropout who claims to have gunned down three rival gangsters last years and now wants to write a book on his tryst with crime.

Every betting circle seems to have a local overlord of sorts. In Timarpur, a middle-aged Bengali man known as Dada is the undisputed satta lord. In Gandhi Vihar, it’s Davinder alias Kapil alias Chhotu, who runs operations next to a mosque. He is believed to be a migrant from Dhaka.Nehru Vihar in north Delhi is another locality infamous for rampant sattabaazi. Jhangi is among the big bookies here. He once wanted a government job, that of a policeman, he says, but he didn’t get a chance. It still nags him, he says, this unfulfilled dream—for he would make an excellent cop. Anyhow, he has been a bookie for some five years. He adopted this livelihood “for the sake of my family” and has learnt to like it.

“I love honesty,” says Jhangi, “The satta bazaar operates with utmost honesty. Once a slip is issued, there is no going back on it. If someone has won a bet, his money will reach him within a day… it will be delivered to his house even if he is dead and in his grave.” Needless to add, the payment ethic works both ways. Those who make bets on credit and later owe money must pay up, no matter what.

“There is no escaping it, for we can get people to pay up from their graves as well,” says Jhangi, grinding his teeth, “We keep others’ money, but don’t allow others to keep ours.” Cash flow is crucial to the entire system. Delays are unacceptable. Defaults are downright dishonest. And there are groups of armed young men—mostly from rural parts of Haryana and Western UP—who ensure that trust levels remain high and default levels are kept low. “That happens very rarely,” says Jhangi, referring to a payment failure. Everyone who plays the satta game, “raja or rank” (king or pauper), knows that the rules apply equally to all. He cites instances of drug addicts and alcoholics who settle their dues before indulging their addiction. The ‘company’ he serves is so strong, he says, because it has the support of cops who are participants as well as beneficiaries.

Jhangi believes Kejriwal is right in saying corruption in this country will not stop unless the corrupt are scared of punishment. But who he thinks will become Prime Minister, he does not disclose. Right now, what’s important to him is which way the betting trends are going and how much money he can make this election season. For the sake of his family, of course.