Behind the Common Stealth Games

When the Games’ tourists come to Delhi, they will find a swanky city that has no compassion for the poor. 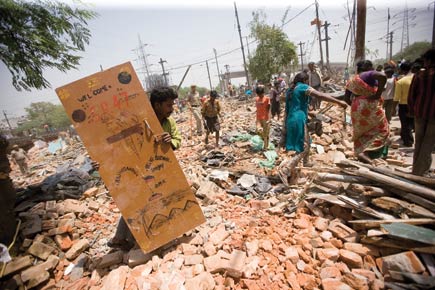 When the Games’ tourists come to Delhi, they will find a swanky city that has no compassion for the poor.


A cenutries-old city is going all out to get the face of the future. As Delhi goes under the knife to smooth away those harsh wrinkles, one can see the city being transformed into a new glamorous diva for the upcoming Commonwealth Games (CWG). Serpentine flyovers, manicured lawns, sparkling new stadiums, neat parking lots and smooth pavements seem to magically rise out of the dust and mud everyday in this busy metropolis. While Delhi slaves away at the treadmill to get that picture-perfect look, government officials can’t help congratulating themselves for having created a ‘world-class’ city.

However, all is not as well as it seems. Lurking behind this stunning façade is Delhi’s surprisingly cheerless, shrivelled body image. One wrong turn from the golden gates of the CWG village and you will find yourself confronted by another aspect of Delhi: one that will surely catch your eye but not dazzle you as the other bright one.

In this Delhi, more than 3 million people are likely to be rendered homeless by the end of the Commonwealth Games; these include 1.2–1.5 million migrant workers upon whose feeble shoulders rests the city’s astounding makeover and the 100,000 families whose hopes were bulldozed to create a bridge or parking lot.

While these parallel realities have been coexisting for the past two years, there is not an iota of doubt about which one will win in the end.

These grim dualities can be seen all over the city. If you happen to pass by Sewa Nagar Railway Crossing, overlooking the majestic Jawaharlal Nehru Stadium, you will see a huge parking lot being constructed with great alacrity. This space once played host to nearly 605 people. But six months from now, it will be swamped with cars for the opening and closing ceremonies of the CWG. The residents, most of them fruit sellers in the adjoining Prabhu Market, are forced to watch strangers working on a space that was once the cynosure of their eyes. “The place where my house used to be is now the parking space for one of the cranes,” says Sri Ram who now lives with his family in a small rented house nearby. Another resident, Gyan Chand, has no option but to sleep on his cart every night. Having sent away his family of 12 to Khajoori in North East Delhi, he gets to go home to them only once a week.

On the fateful 10 January 2009, their dreams were razed as ten bulldozers reduced their houses to rubble. “People had been living here since 1968; all of us had been issued ration cards and voter ID cards over time,” says Dinesh Kumar, who used to be the RWA president.

Even after filing an RTI and meeting countless government officials, their pleas continue to be ignored. According to the government’s relocation policy, only those citizens who had been staying at a place since before 1998 and who possessed a ration card and voter ID card at the time of survey, are eligible for rehabilitation. “We submitted all the relevant documents to MCD officials, but none of us was rehabilitated,” argues Kumar. The MCD, on being asked about the status of these residents, completely evades blame. “We are only the implementing agency. The Sewa Nagar cluster is not covered under our policy. Moreover, the decision to demolish the cluster was taken by the land agency,” say officials at the MCD’s Slum and JJ Cluster Department.

A few metres away from the parking lot is Kushak Nullah. The drain is going to be covered and ornamented while a road connecting Thyagaraja Stadium (located behind the famous INA Market) with Jawaharlal Nehru Stadium will be built alongside it. As one walks from the Nullah towards the construction site, one can’t help but notice two nondescript tents lying abandoned by the side of the rubble. An old lady emerges from the plastic sheet, her rheumy eyes staring blankly down at the stretch. Meet Kamala Devi whose house was razed to ground nearly a year back to make way for the road. Her husband died seven months ago in this crude, makeshift accommodation. “Dilli sarkaar garibi ko nahin, garibon ko hata rahi hai (Delhi government is not removing poverty, it is removing the poor),” says Kamala, who now has only a dog for security.

Hearing these horrifying tales is even more difficult for people who know it is going to be their turn next. Decades ago, when they settled on this prime land, little did they know that years later they will be spending each night watching out for bulldozers. This is the story in Lodhi Colony, a symbol of the aristocratic spirit of Delhi. Hidden behind the posh houses is the huge slum cluster of Indira Colony. These jhuggis (huts) are next to the Thyagaraja-Jawaharlal Nehru Stadium road. They know the future that awaits them, and yet hope that they might be spared the axe. Some have already fled out of fear. However, those who have been living here for the past 60 years find it hard to let go of their memories. “Aisi pareshaani koi dushman ko bhi naa de (I would not even wish this on an enemy),” cries Renu who works as a domestic help in Lodhi Colony.

Each demolition site around Delhi reeks of helplessness, broken promises and miserable existences. In another part of South Delhi, next to the Hazrat Nizamuddin Station, nearly 400 people are lying on the footpath, with the merciless afternoon sun beating down on them. On 15 April this year, the entire Madrasi jhuggi cluster was demolished to make way for the Barapullah Nullah Bridge, which will connect the Games Village with venues in Central Delhi.

As women wailed and men watched in shocked silence, one after the other, 150 houses were reduced to dust. “The local MLA had told us that a wire needs to be laid along the cluster; that we should just lock our houses and wait. And look what happened,” say Lata and Nauamma. As the cranes droned away, people furiously sifted through the rubble trying to find doors, wires, pieces of wood, anything that would help them cling on to the memories of a better life. “An incident like this has never happened here before… 375 out of the 400 residents have a ration card, and yet the government allotted plots to only 36 people?” asks Kanan, who works as a driver in the city. And even those 36 people have not yet got their allotment letters. “The plots were allotted 60 km away in Sawda Ghevra, and now even those orders have been taken away,” says Raghotman, one of the few who was promised space.

Let’s now look at East Delhi, land of the Commonwealth Village—the very picture of opulence with its plush 1,168 flats. Barely 2 km away from this vision of sporting snazz, along the Ghazipur flyover, lies a huge slum that was gutted on 9 April. On a hot summer afternoon, while the men were at work and women were taking a siesta, a fierce blaze ravaged the slum.

A day later, 10,000 odd residents were trying to trace the remnants of their houses from cold cinders. There were supposed to be three weddings in the cluster that week, but the fire took with it all the money and jewellery that had to be gifted to the guests. “Our I-cards have been burnt. I had been saving up Rs 50,000 for my son’s operation, and now not a paisa remains,” says Saidul. While the government is busy procuring motorcycles and special fire tenders, and is spending money on training men in the use of mist spray technology just for the CWG, many clusters like the one in Ghazipur are sitting in dangerous territory, right between two power grids.

As one zooms along the new flyovers or marvels at plush arenas where the athletes will compete, it seems easy, almost too easy to forget dour realities that lurk around the corner. In moments of euphoric jubilation, one also forgets the people who toil to make this city ‘world class’. “The labourers who work at the site live in completely different circumstances. The sub-contractors and local contractors completely violate all labour laws,” says Harsh Mander, India’s Supreme Court-appointed poverty commissioner.

The makeshift tents bear testimony to the harsh conditions under which these workers live in Delhi. According to NGOs such as Hazards Centre, on an average, nearly 100 people use a single toilet in a camp. There is no drainage, with human beings co-existing with flies and mosquitoes in a tiny little space. It is not that the government doesn’t have funds to give these workers a decent workspace. In fact, according to a report by the four-member monitoring committee constituted by the Delhi High Court to look into the working conditions of labourers at CWG sites, a whopping Rs 400 crore had been collected for the welfare of workers, of which a mere Rs 28 crore has been spent (on the education of some of the children). “Workers are not being paid minimum wages that are due to unskilled labourers as prescribed by the Building and Other Constructions Workers Act, 1996,” says Amjad Hassan of Delhi’s Asanghatit Nirman Mazdoor Union (Damu).

So while Delhi embarks on a grand trip to attain cosmetic salvation, the city’s poor are being shoved behind bamboo screens to help create the illusion of it being a ‘trendy, fun and young’ destination. Suddenly, it seems, there is no place for the poor and homeless in this city. According to the Modified Relocation Policy that was released earlier this month, nearly 7,900 flats are being created in Bawana for the displaced. However, the very mention of the name sends shudders down people’s spines. Located on the outskirts of Northwest Delhi, nearly two hours away from the heart of the city, this dusty relocation camp offers little scope for livelihood. Each day brings with it some incident of murder or theft in the area. “We are all seeing the kind of progress that is taking place. For bridges to be built and flyovers to be constructed, some people need to be displaced,” says a senior official with the MCD’s Slum and JJ Cluster Department who spoke to Open on condition of anonymity.

Incidents like this are not unique to Delhi. History has shown that across the world, be it in Atlanta, Seoul or Beijing, prior to an important event, police often undertake ‘street sweeps’ to clear the homeless, vendors, informal workers, slums and other visible signs of poverty.

However, no amount of figures can mask the despair of those rendered homeless because of a mere 15-day ‘sporting’ event. “As a society, we have grown indifferent to equality around us. The poor are either seen as a nuisance or an encumbrance or embarrassment. Most of us are migrants to the city; if we are not being sent back, then why should labourers or beggars be made to go?” asks Mander, adding, “A world-class city is not one which hides its poor, but one which is just and compassionate towards them.”