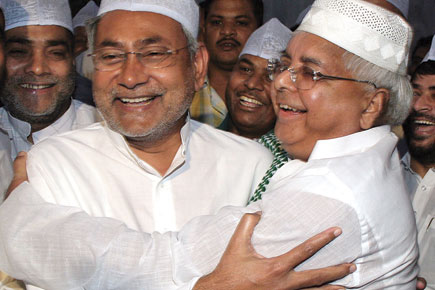 
The Ayodhya verdict has led to a sudden shift in Bihar’s politics. Witness, for example, the decision of Sabanam Parveen, wife of Chief Minister Nitish Kumar’s sole Muslim Lok Sabha member Monazir Hassan, to contest the upcoming Assembly polls from Munger on a ticket from Lalu Prasad’s rival party.

Nitish Kumar, who till 30 September seemed well placed to retain power, suddenly looks vulnerable. And, in a state where Muslims make up 16.5 per cent of the population, a revival of Lalu Prasad’s M-Y (Muslim-Yadav) combination is now a distinct possibility. Muslim votes are electorally decisive in about 60 of Bihar’s 243 Assembly constituencies, and wield varied degrees of influence in about 50 others. The slightest murmur among them, therefore, has politicians bending earlobes forth to listen. And sure enough, Muslim disquiet was evident in a Patna gathering of Bihar’s district-level ulemas—the first of its kind since the Ayodhya verdict—on 5 October.

While the four-score-or-so gathered scholars of Islam took care not to name any political party, the swing in their mood was clear. “Muslims should be careful not to strengthen even indirectly the hands of those who demolished the Babri Masjid… Can we forget that statues were placed in the mosque during Nehruji’s regime, and locks were opened while Rajiv Gandhi was Prime Minister, and the demolition took place at the time of Narasimha Rao?… Can we forget the courage that Lalu Prasad showed when he stopped Advani’s rath and put him in jail (in 1990)?” asks Maulana Azharul Quadari of Sitamarhi. “Some people want our vote for stopping Narendra Modi [from coming to Bihar], and there are others who think our support can be bought by giving us a small piece of Babri Masjid land. Such people must be defeated in Bihar,” says Sayyad Ahmed Raza of Patna’s Idar-e-Shariah.

The emphasis was on voting in unison in Bihar’s upcoming polls, with digs taken at Nitish Kumar, the Bharatiya Janata Party (BJP) and even the Congress. The only party to escape their ire was Lalu’s Rashtriya Janata Dal (RJD).

But matters are not so straightforward. While much depends on which way Muslims go, they themselves are closely watching Yadavs in two constituencies: Mahisi in Saharsa district and Chhatapur in Supaul. Tactically, a switch in allegiance to Lalu’s RJD makes sense for them only if Yadav voters back the party in large numbers. And these two constituencies serve as test cases for several reasons. They are among the 47 going to polls on 21 October in the first phase. They are among the ten Assembly seats for which the RJD has fielded Muslim candidates. They are the only two among these ten with heavy Yadav presence. And they were won last time round by Nitish Kumar’s Janata Dal-United (JD-U), the ruling party today.

“Around the time polling is held for the first phase,” says Maulana Anisur Rahman Quasmi, nazim of Imarat Shariah and chairman of Bihar government’s Haj House, “Muslims would be ready with a safe-and-stable course for themselves. Before arriving at any decision, we will wait and see how Yadav voters turn out for the RJD’s Muslim candidates at Mahisi and Chhatapur.”

Dr Abdul Gaffur and Akeel Ahmad are the RJD candidates for Mahisi and Chhatapur, respectively. The JD-U, on its part, has replaced its legislators with new faces for the polls here:  Rajkumar Shah for Mahisi and Neeraj Kumar Singh for Chhatapur. The Congress also has candidates, but they are seen as also-rans. “The Muslim-Yadav unity that Lalu Prasad had achieved in the 1990s has withered away in the last few years. Mahisi and Chhatapur’s Yadavs will show whether this option is still viable for Muslims,” says Maulana Quasmi. “If this option does not work, a section of Muslims may vote Congress.”

As for the JD-U, which has been positioning itself as a well-wisher of Muslims, especially the backward (Pasmanda) among them, Maulana Quasmi merely says, “Muslims take both their religion and politics seriously, especially in times of crisis.” If anything, worries over Ayodhya have refocused Muslim attention on the JD-U’s status as an ally of the BJP, a member of the Hindutva movement’s prime mover, the Sangh Parivar. Given the saffron triumphalism in the wake of the Ayodhya verdict, Nitish’s rhetoric on keeping Hindutva icons—Gujarat Chief Minister Narendra Modi and Pilibhit MP Varun Gandhi—away from Bihar’s electoral fray suddenly seems wishy-washy.

POWER OF THE SWING VOTE

Lalu’s loss of some Muslim support in 2005 had played a big role in his losing power that year. In the polls held in February 2005, the RJD had fielded 32 Muslim candidates, of which 21 lost. In the next round of October-November 2005, only four of the RJD’s 30 Muslim candidates scored victories. Its ally, Ram Vilas Paswan’s Lok Janshakti Party (LJP) fared worse; all its 29 Muslim candidates lost. On the other hand, the rival JD-U saw four of its nine Muslim candidates win, and the Congress five of its 12.

Evidently, there was no en bloc Muslim voting in 2005, and this trend was visible even in last year’s general election for the Lok Sabha. In 2009, two-thirds of the BJP-JD-U alliance’s Bihar MPs won their seats on margins of under 50,000 votes. In more than half of the 20 Parliament seats won by the JD-U, the winning difference seems to have been made by a swing in Muslim votes. Even the BJP victory in Bhagalpur had some Muslim support, say observers. Where caste loyalties are rigid, they add, just a slight shift in voting patterns can do it.

The shock upset of last year’s Lok Sabha election in Bihar, however, took place in Pataliputra. Lalu Prasad lost here to the JD-U’s Ranjan Yadav, and this was at least partly because he was deserted by Muslim voters of Phoolwari Sharif (part of the constituency) in large numbers.

Now, suddenly, all that warmth for the JD-U seems like a long time ago. “Whether Modi campaigns or not, can anyone deny that the BJP is kept alive by Nitish Kumar?” asks Alam Beg, a resident of Phoolwari Sharif. “Muslims can make or mar a government in Bihar,” he adds, “Nitish Kumar would have swept the elections had he dumped the BJP.”

“The jubilant BJP may soon encounter another truth,” adds Maulana Quasmi. “Nearly half of the 100 odd seats the BJP will be contesting in Bihar have Muslim populations ranging from 40,000 to 100,000, a number that will have a significant bearing on poll outcomes.”

The man who is cautiously watching all this is none other than the ‘clown prince’ of Indian politics (a phrase he coined for himself): Lalu Prasad. This election, he knows, will be his career’s severest test. Can he stage a comeback? The question evokes laughter no longer, for he couldn’t have dreamt of a better chance to end his exile from power.

The day the Ayodhya verdict was pronounced, Lalu issued a one-line statement, appealing for peace and harmony. According to a senior RJD leader, speaking on condition of anonymity, the former CM has issued strict instructions to all his party functionaries to keep mum on the verdict and its political contours. While Mulayam Singh Yadav, the M-Y hopeful of Uttar Pradesh, has been unrestrained in his criticism of the Allahabad High Court judgment for placing belief and faith above law and evidence, Lalu sees no need to be very vocal. Unlike the Congress, or even Mulayam lately (who’s still trying to shake off his saffron-tainted Kalyan Singh alliance), Lalu’s credentials in the Ayodhya affair have always been clear to Muslim voters.

While the RJD works overtime to consolidate its vote base among Muslims, Yadavs, Paswans and perhaps even Thakurs, the winning deal will have to be the party’s original M-Y formula. This explains why almost a third of the party’s candidates for the first phase (ten of 31, that is, with 16 seats left for the LJP) are Muslim. Similarly, in the 45-seat second phase to be held on 24 October, the RJD will field six Muslims among its 34 candidates.

Yet, analysts are convinced that the M-Y formula can work only if Muslims vote in unison for the RJD, as they did during the Ayodhya-charged 1990s. Yadavs, of course, are already overwhelmingly in favour of the RJD, but Muslims are yet to take a final call. While perceptions of a Congress waffle over the verdict may deal a blow to its wooing of Muslims, the grand old party can still make gains on tactical grounds in Bihar. Political experts feel that the Congress’ ability to get a slice of Muslim votes would depend on the extent to which it retains upper-caste favour, especially of Brahmins and Bhumihars who may have switched over from the BJP-JD-U combine in recent months. If there are clear signs of the Congress being backed by upper-caste voters, it will gain a tactical advantage. But even this looks difficult now, given that the BJP is likely to make the most it can of the Ayodhya verdict with upper-caste Hindus.

Nevertheless, any mistake by the RJD could turn the Congress into a contender for Muslim votes in Bihar, apart from stalling their shift away from the JD-U. Many in the JD-U remain confident that the disquiet among Muslims will not mar the ruling party’s prospects. “No doubt, the BJP will gain upper-caste Hindu votes. But Muslims will not leave Nitish Kumar,” says Ali Anwar Ansari, a Rajya Sabha MP of the JD-U and president of Pasmanda Muslim Mahaj.

Ansari’s may be a forlorn hope. The shift away from the JD-U is palpable. If Nitish Kumar’s strength has turned into a weakness in debates among Muslims, Lalu Prasad’s weak spots are being hailed as points of strength. Before 30 September, for example, Lalu’s promise of appointing a second Deputy CM who’d be Muslim, if he came to power, was being brushed aside as a cynical vote-catching gimmick. But after the Ayodhya verdict, the prospect of getting access to the state’s power structure has gained a new appeal for Muslims.

Nitish Kumar’s worries are encapsulated by what’s happening in Bihar Sharif, an Assembly constituency that’s also the headquarters of the CM’s home district of Nalanda. Here, his party candidate Dr Sunil faces a strong challenge from the RJD’s Afreen Sultana. “Almost half of the population in Bihar Sharif is Muslim. If Dr Sunil wins this time, he will win with the support only of Hindus. Muslim votes will mainly go to the RJD candidate,” says Shahab-uddin, a local shopkeeper.

There are many voters far less vocal. If Lalu stumbles this time round, he may never be able to recover. For the moment, though, Ayodhya appears to be playing out largely in favour of the clown prince who manages to use earthy subtlety to convey his stance on a wide variety of issues, Ayodhya included.