Anatomy of an Imperfect Law

The confrontation between Team Anna and the Government is set to continue beyond this Bill. Meanwhile, they both need to acknowledge the blame they deserve for its drawbacks 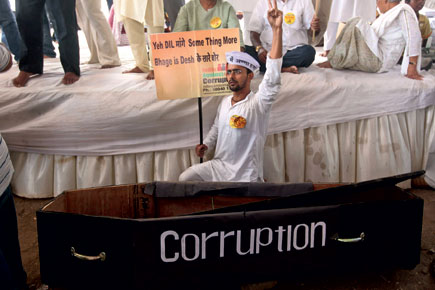 The Team Anna-Government confrontation is set to continue beyond this Bill. Meanwhile, they both need to acknowledge the blame they deserve for its drawbacks


Rarely have we had such a close-up view of the legislative process as we have witnessed over the past year with the Lokpal Bill. As the accompanying article shows, three competing versions of the Bill all have their merits and drawbacks, but what remains true is the final compromise that might emerge in Parliament could be the worst of the available choices, even if it offers a considerable improvement over the current situation.

From the very beginning, the Government has shown little desire to pass an effective anti-corruption law. A small coterie of ministers, people with little or no actual political experience such as Salman Khurshid and Kapil Sibal, have been at the forefront of the Government’s effort to backpedal and subvert any substantive new measures being proposed. These same ministers have also been handling the media spin on the resultant criticism with an arrogance that does not take into account public perception. They haven’t managed either job well. At the end of the process, the Government has had to concede much that it did not want to, but even so, it has ensured that the final result falls well short of an ideal law.

In this, Team Anna has acted as a collaborator, however unwilling. While the credit for any such law must go to the anti-corruption movement, it is also true that its own drawbacks are reflected in the bill that Anna’s supporters have proposed. Much like the patriarchal figure of Anna Hazare controlling the village of Ralegan Siddhi, whip in hand, they have envisaged a Lokpal who deals with the nation in the same authoritarian fashion. They seem to have little awareness that power requires checks and balances, and that the safeguard of an appeal in the courts is virtually ineffective for most ordinary people, given the delays in the judicial process.

Recently, one member of Team Anna had called to find out why we at Open ‘hate’ Anna so much. The very question betrays a certain mindset. We have criticised Anna’s methods in the past, we have questioned the means that the movement has adopted, and we have done much the same where the Government is concerned. But Team Anna seems to have little realisation that the world is not divided into ‘us’ and ‘them’. The question of who they are accountable to is not so easily answered by pointing to crowds gathered at the Ramlila grounds or results of some hastily organised referendum.

The Jan Lokpal bill, which so far has not been subject to any compromise because of their mindset, envisages a vast structure embracing police stations down to every block in each district. So much emphasis has been laid on the policing aspect of this bill that the grievance redressal mechanism that will actually ensure the elimination of minor day-to-day corruption has not been adequately debated (the next article, ‘The Lokpal and You’, details how important this aspect really is).

In the confrontation between the Government and the movement, neither side has shown a willingness to compromise. We have seen so much time spent on whether the Prime Minister should be part of the Bill that the poor excuse for a grievance redressal bill that was finally approved by the Cabinet has passed unnoticed. Typically of Anna, he has now criticised a separate Citizen’s Charter outside his Lokpal bill, but has failed to raise the point that the charter as framed by the Government is woefully inadequate. It matters little to a citizen if his grievances are redressed from within the ambit of the Lokpal or by an entirely separate authority, as long as the procedure is effective.

It now seems quite likely that the form of the Bill approved by Parliament will not be entirely to Team Anna’s liking, but if it is a version backed by the opposition, there is little the team can do. It is more likely that they will claim partial credit and begin outlining the next steps for this movement. From electoral reforms to ill-thought-out ideas on direct democracy, many such proposals have emerged from Team Anna, but it is now evident that they have a well-calibrated knack for grabbing public attention and pursuing an agenda on the grounds of national interest.

This can only ensure that the movement, if it survives the passage of the Bill, will largely follow a middle-of-the-road path, tilting perhaps a little to the right. The movement is not interested in issues that can prove divisive even if they appeal to the liberal mind, such as the repeal of the Armed Forces Special Powers Act. Neither is the movement going to adopt a right wing agenda that again alienates a large part of what it sees as its support base. For this very reason, from now on it will follow a careful path set as much by its perceived support base as by its leaders.

The one thing that will continue is the confrontation with this government. In fact, the reason that Team Anna may well survive the passage of the Lokpal Bill is the weakness of the current dispensation, which is what fuels the movement. The sense of crisis that has overtaken the UPA is not going to disappear, and it only seems to worsen with each poorly conceived attempt at damage control. It is this sense of crisis that drew opposition leaders as disparate as AB Bardhan and Arun Jaitley onto Anna’s protest stage. In doing so, the opposition is doing what it must, taking advantage of a political opportunity. But this is feeding back into the stasis in policy and government. The question remains whether we can afford another two years of this government in confrontation with this movement.