Rarely do academic quarrels enter popular discourse. But the latest battle has thrown up a gripping controversy. Could the people of Indus Valley read and write? 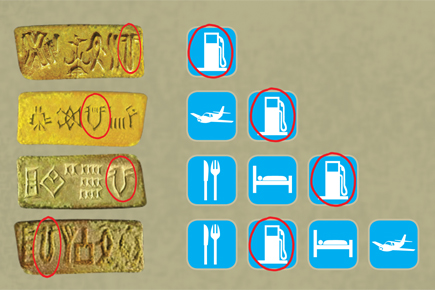 Sophisticated they were, but did the people of Indus Valley have a written language? We try to read the signs


Just what constitutes a written language? A research paper in the current issue of Science written by Rajesh Rao of the University of Washington, Seattle, along with scientists of the Tata Institute of Fundamental Research (TIFR), Mumbai, makes interesting reading. According to it, a statistical analysis of Indus Valley symbols, those curious inscriptions that abound on thousands of seals uncovered by archaeological excavations over the past century, confirms that these signs have much in common with written languages as we know them today.

Now, this is something that most of us took for granted anyhow. After all, those seals are authentic, as is commonly known, and those ancient inscriptions are as good a proof as any of a written Harappan language (Harappa being the main excavation site that has lent its name to an ancient civilisation, also known as Indus Valley, in the Subcontinent’s northwest). But what a written language is or isn’t, it seems, is not such a simple matter in the field of academics.

In a series of combative and well-argued papers published between 2002 and 2004, comparative historian Steve Farmer and Harvard professor of Sanskrit and Indian Studies Michael Witzel have claimed categorically that the symbols do not represent a written language.

Thus did Farmer and Witzel argue in a 2004 paper, “The implausibility of the view that the so-called Indus script was true writing is suggested in many ways that do not require sophisticated analyses. The simplest argument is the best: the sheer brevity of the inscriptions. We possess thousands of inscribed Indus objects on a wide range of materials. The average inscription is 4-5 symbols long and the longest, found on a highly anomalous piece, carries 17. Before our paper, the lack of real texts was explained away by invoking the purely speculative image of lost perishable manuscripts. The speculation was spurious: we know of hundreds of literate societies, but not of one that wrote long texts on perishable materials but failed to do so as well on durable goods.”

So sure is Farmer of his assertion that he has even gone on to put money where his mouth is. “Turn up just one Indus inscription that contains at least 50 symbols distributed in the outwardly random-appearing ways typical of true scripts contemporary to the Indus system,” he is on record as saying, “and we will (1) declare our model to be falsified and (2) will write a check to the discoverer or discoverers for $10,000.”

The offer, backed by an anonymous donor, is valid throughout Farmer’s lifetime.

In their 2004 paper, Farmer and Witzel had further written, “A comparison of Indus sign frequencies with those in ancient scripts confirms a deeper suggestion: that the Indus system was neither able to (nor apparently meant to) record speech, contradicting 130 years of claims that Indus symbols were part of a true ‘script’.”

The argument in defence of a written Harappan language, however, takes a slightly different approach to the question. Says Rao, in a written response to Open, “Our paper addressed their challenge by comparing the Indus texts to biological sequences (DNA, proteins), an artificial language (Fortran), as well as two artificial datasets that mimic the properties of the two nonlinguistic examples put forth in the 2004 paper. The results showed that the Indus text has a lot more in common with the natural languages we considered than any of the above, at least in terms of their conditional entropy, which measures the amount of flexibility or randomness in strings.”

To understand Rao’s argument, one needs to grasp the concept of conditional frequency. For example, consider the English language—in any word, the occurrence of the letter ‘q’ is certain to be followed by the letter ‘u’. A language in which one letter is enough to predict the next is considered ‘highly ordered’. An unordered language would be one in which knowing one letter is no help in predicting the next. Conditional entropy measures this order, and most natural languages tend to fall between the two limits. According to the fresh research results, the Harappan signs score well enough on the conditional entropy scale to qualify it as a natural language. As Rao puts it, the new findings “increase the probability that it is a language by providing quantitative evidence in favour of it. Future work on the underlying grammatical structure of the script will help shed more light on this question”.

Farmer claims to have heard Rao and his colleagues out. However, he is not willing to concede the point. “They have proved nothing,” Farmer retorts, with an air of dismissal that’s hard to miss. “What sense does it make to compare the Indus Valley signs with DNA or with artificial symbols they have concocted?” he asks testily. “What we are saying is simple,” he adds, “the Indus Valley signs resemble other sign systems such as Scottish heraldic signs that are not a writing system. This is what they should have compared the Indus Valley signs to, and then they would have had no result to publish.”

Quite an outburst, that. As an academic dedicated to the cause of learning, Rao approaches the issue rather more gingerly, careful to state that his results stop short of proving that the script is a true language. “As a scientist,” he writes, “it would be wrong to conclude one way or the other without further work. I believe what we can say at this time is that there is statistical evidence suggesting linguistic structure in the script.”

Farmer had earlier been at the forefront of efforts to knock down claims by Hindutva propagandists that the Indus Valley Civilisation was home to composers of the Rig Veda. These claims were backed by fraudulent reconstructions of Indus seals to show horses. His suspicions aroused by that episode, Farmer believes that this recent effort also owes much to “political fantasies of the past”. The study of ancient India, he feels, has been interpreted variously for their own ideological ends by advocates of Hindutva, Dravidian nationalism and Dalit resurgence, and that’s unfortunate.

Rao, in turn, shrugs off the charge of cultural nationalism. “Ad hominem attacks have no place in science,” he says, “I would rather that they conduct the debate in peer-reviewed scientific journals.” On his part, though, Farmer says he is planning to publish such a rebuttal soon, and would raise the matter in the course of a colloquium on ‘Massive Non-Literate Civilizations of Eurasia’. Written language, he points out, is not essential for organising complex societies, with the Incas and Aztecs as examples. “The Indus symbols disappear around 1900 BC and no written script has been detected before the third century BC in India,” he says, “The Brahmins actively opposed writing, but this doesn’t mean that a complex urban civilisation did not exist before the third century. As far as I am concerned, the fact that the Indus Valley Civilisation was not a literate society makes it more interesting rather than less.”

The debate could turn even more heated over the coming months. This would be just as well. Beyond the question of politics and ideological spin, Harappan symbols remain a tantalising intellectual challenge, perhaps one of the most important matters that have yet to be settled in the study of history. One way or another, the puzzle has an answer. But until we know for sure what it is, it will continue to engender debate.