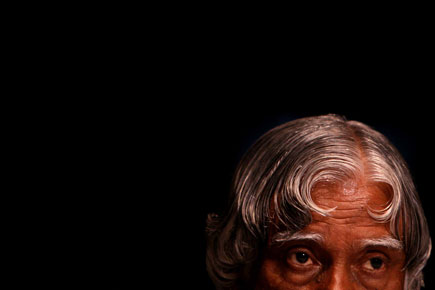 It was one of the Delhi December mornings at Siri Fort Sports Complex and the sun was yet to make its mark. Fog had enveloped the area in its bosom and the visibility had been reduced to couple of yards. Upbeat about my new health regime, I was jogging and had completed one round of the track when I heard a voice, not far from me, “Young man, maintain your CG.”

The voice was in instructional tone. I looked back and saw a misty figure waving at me, instructing me to continue. I did not pay much attention and thought it to be an elderly person looking for a company. When I completed the second round, and encountered the same person again, I took a closer look. It was none other than APJ Abdul Kalam, the then Chief Scientific Advisor to the Prime Minister. He was in his inimitable style – loose clothes, wavy, silvery hair with a smile on his lips and brisk walking. I greeted him, “Good Morning, Sir,” and before I could hear from him, he waved and asked me to continue with my jogging. After finishing my usual three rounds, I sat down to take a breath. He too, by the time, had finished his routine walk.

Curious to know something, I approached him and asked, “Sir, what do you mean by CG.”
“Center of Gravity,” he said nonchalantly.
“But what has it to do with me,” I asked again, unable to figure out the terminology which I had studied years back in my school.

Abdul Kalam then suddenly transformed into a physics teacher. With gesticulation and facial expression he started explaining my faulty posture and how it affected the center of gravity of my body. “You should not lower your head and contract your chest while running. A bad posture affects your body’s CG and leads to uneven distribution of body weight. Keep your posture erect, chest puffed up so that it can draw more oxygen into it.”

I listened to the Missile Man like an obedient child wondering whether the aerodynamics of a missile applies to the human body as well. It was a crisp and sharp conversation and it ended shortly. As we parted, I could not forget what he told me, fearing he would lecture me when I meet him next. He had, sub-consciously, converted me into one of his students.

Back in The Hindustan Times, where I was working then, I explained this newly discovered concept to my friends and soon we would call him CG man.

My next couple of months at the Sports Complex was quite disciplinary. I don’t remember Kalam missing his routing walk even for a day. Always on time, he would keep his security personnel outside the jogging track and do his brisk walking. If you ever wished to match his steps, you would have to almost run to catch up with him.  For me, years of bad posturing made my task difficult to improve. When I explained this to my new teacher, he came out with a new concept called ‘foot strike’, an alien term to me then. It meant the part of the feet, which should touch the ground first to improve the jogging ability.

While jogging, whenever I noticed Kalam approaching, I would correct my gait and body posture. I would puff up my chest. He would notice and then smile and exchange some words. Till this day, whenever I am jogging, I make a conscious effort to follow his suggestions.

There was not much that we discussed during our routine exercise, except about health and daily events. He was a man of few words and would hardly talk about politics or political leaders. Once in a while, when we spoke (which was his privilege), he would speak about education, young people, scientific discoveries and what India need to do to nurture its young people. I never heard him lamenting on any issue. He believed in hopes, dreams and its actualization.

When the news of his passing away came, my first thought was about my CG teacher. His death during a lecture at the Indian Institute of Management, Shillong was a befitting end of a life of a teacher.

My next reaction was to reboot my memory about the concept of Center of Gravity. It had been almost 15 years and I had completely forgotten its relation with the human body. So, I searched for it and here was Kalam again, “The center of a body’s mass, which is the point at which all parts are in balance with one another. The center of gravity depends on the body’s position in space, anatomic structure, gender, habitual standing posture and whether external weights are held.”

Dr Abdul Kalam was unarguably one of India’s most loved presidents. His contribution to India’s space and missile development program need no mention. But he was more than that. He taught millions of youths to aspire, dream and actualize their hopes. He was a friend, philosopher and guide to anyone who would approach him.

For him, this life was too short to achieve what he wanted to. But he has left behind millions of ignited minds, which would prove that the distance between the earth and the stars are mere constructs. The reality lies in going the extra mile, which he so eagerly travelled all his life and even in his death. Bid adieu Kalam sir!