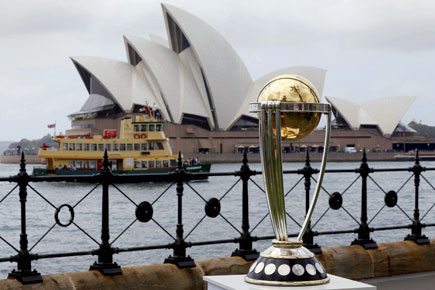 India’s Defence of the World Cup

If cricket is religion in India, then the World Cup is its grandest festival. From 14 February to 29 March, as India defends its World Cup title at Australia and New Zealand, schools and offices in India are going to register very little attendance. This is certain to be the case on 15 February, the second day of the tournament, when India take on Pakistan. Pakistan seem to have a terrific line-up of players for this tournament, but a World Cup featuring the two teams—as always proven—is as much about nerves as skill.

Will India’s most successful sports league take place as planned next year? Will it feature the two top teams, Chennai Super Kings and Rajasthan Royals? And what of their respective owners who have been accused of participating in last year’s spot-fixing and betting scandal? And the most intriguing question—what happens to the protagonist of modern cricket’s most intriguing story, N Srinivasan? Will the ICC chief and exiled boss of the BCCI be able to circumvent the Supreme Court and the findings of its committees, like he did with the media and public opinion? He wants to contest the election for the post of BCCI president, but the court, which postponed the election from 17 December to 31 January, wants to decide if he is even worthy of it. The drama will unfold, if not conclude, in the first half of 2015, when the Supreme Court finally takes its call.

After the spectacular rise and fall of the Aam Aadmi Party (AAP) and its government, Delhi goes to the polls once again. As predictions go, the BJP is set to take control of the capital, but one can never discount a surprise result. The AAP came out of nowhere the last time, and it could very well prove to be the dark horse; and unless the Congress has a trick up its sleeve, its decimation seems complete.

Republic Days, unfortunately, are staid affairs, where old grandparents or youngsters with nothing more interesting to do wake up early and watch the Parade down Rajpath on Doordarshan. The state guests are usually unknown figureheads. But not this time. The Modi Government has achieved a PR coup, getting Barack Obama to attend the event as chief guest. Coming after Modi’s grand reception in New York, Obama’s visit may kick start a closer relationship between the two countries. Having Obama on his side will be crucial as Modi reaches out to Japan and seeks to increase India’s clout with its South Asian neighbours, while also checking China’s increasingly assertive territorial claims in the Asia-Pacific region.

Among other things, 2014 marked the return of Apple. Its iPhone 6 and 6 Plus rollout was vintage Apple, full of giddy anticipation and excitement. The two models did not just break sales records globally; they put Apple, still reeling from the loss of Steve Jobs, back on track. 2015 could mark a new chapter for the brand. Apple is entering a completely new product market by bringing out the first Apple Watch. This smartwatch, expected to be out early next year in the US and soon after in India and the rest of the world, could end up revolutionising the new and growing industry of wearable technology.

Even as airline companies continue to bleed cash, mostly mired in debt, there seems to be some good news around the corner. The industry might still be considered risky, but there are a number of new airlines that are set to take off next year. There is the much-talked about Vistara, a joint venture of Tata Sons Ltd and Singapore Airlines Ltd, which has already received operating permits from the DGCA and is expected to operate its first flight in January. There is Air Pegasus, backed by Decor Aviation Pvt Ltd, which handles airport services for domestic and international carriers across southern airports, which—with Bangalore as its hub — will fly 25 sectors within South India daily. There is Air One, currently running an air charter service, which is expected to launch commercial flights by mid-2015. Others like Fly Easy and Premier Airways are currently hiring staff and are expected to launch services next year.

The Magna Carta 800th Commemoration Committee, London, has drawn up an elaborate calendar of celebrations across Britain and the rest of the world for the historic 800th anniversary of the sealing of Magna Carta in 1215. From specially commissioned BBC documentaries to academic conferences, public exhibitions, community events and a Magna Carta tourism trail, there will be hundreds of exciting events. According to the Committee, ‘The 800th anniversary of Magna Carta is an occasion to deepen our understanding of the crucial role it has played in the development of human rights, democracy and liberty. 2015 is a time to commemorate the individual rights we enjoy today and an opportunity to strengthen human rights around the world.’

In the last 58 years of sending entries for the Best Foreign Film category of the Academy Awards, India has made it to the shortlist on only three occasions. None of them led to an Oscar. Yet every year there is a giddy sense of anticipation about the Oscars in the country. And invariably there is also some controversy. Last year, a little-known film, The Good Road, was selected instead of the overwhelming favourite, The Lunchbox, which also had big studios backing it. This year it is Liar’s Dice. The film, about a young mother at the Himachal-Tibet border looking for her missing husband, is supposed to be very good. But despite having been ready for a long time—it was shown at a festival in 2013— it hasn’t yet secured an India release. The film was apparently released in Thiruvananthapuram days before India was to select its entry to make itself eligible for the Oscars. With little studio backing, it is likely to be missed by the jury at the Oscars. We will, of course, all be up early to check if it wins.

The shiniest star in the night sky may finally get his comeuppance, it seems, next year. Almost 13 years since he allegedly ran over sleeping pavement-dwellers in a drunken stupor, killing one and injuring four, and then fled the scene, the court seems to be on the verge of making a pronouncement. The charges against him have been made more severe, from causing death by negligence to culpable homicide not amounting to murder ; the victims and families of the victims who had disappeared in the last few years have now been traced, and almost all witness accounts have been noted down. So far it has been established that the actor was drunk and was seen in the driver’s seat of the car in the parking lot of a hotel, after which it is alleged he ran over the victims. If Khan is found guilty, he could potentially receive a sentence of 10 years in prison.

The BJP scored a victory in 2014’s General Election on a platform of development and growth, but the 2014 Budget presented by Finance Minister Arun Jaitley was really just an extension of the old Government’s. In his defence, he really didnt have any time for radical changes. The 2015 Budget is going to be the real test for the Government. Will Jaitley unveil a “whole set of second generation reforms” as he has promised? Will the BJP—using the huge mandate it received in the General Election and its stellar performance in various states—be able to resist the temptation of a populist budget, and give India the booster shot it needs?