Beware the Alarmists in the Marketplace 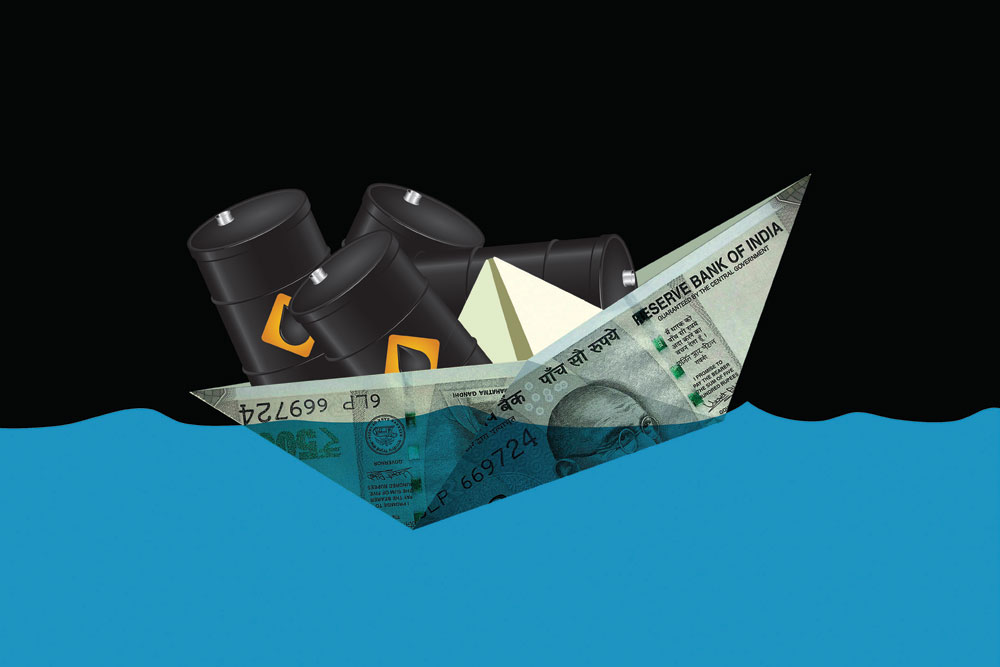 THESE ARE GRIM days for the Indian economy. A tanking rupee, oil prices on fire and global economic turbulence have created a constellation of factors that has made life hard for India’s economic managers. On September 6th, the rupee breached the 72 mark for a dollar, its lowest point so far. It has not looked back and since last week, it has remained above that mark. As if acting on cue, equity markets have taken a tumble as well. On September 11th, the benchmark Sensex index shed 509 points—or 1.34 per cent—wiping off 977 points since trading opened after the weekend. If that were not enough, consumers were hit hard where it hurts the most: high and rising prices of fuels like petrol and diesel. In Delhi—where these fuels are the cheapest among the four big metropolises—petrol prices now hover above Rs 80.

The economic reasons for all this are clear. Since January this year, the rupee has lost 13 per cent of its value. Part of this has to do with high global prices of oil that have galloped in the last one year. These, in turn, have led to an imbalance in India’s export- import balance. In July this year, exports grew at 14.3 per cent on a year-on-year (y-o-y) basis, i.e. when compared to the same month last year. At the same time, imports grew by more than double of that rate at 28.8 per cent y-o-y. This was just one illustrative month. When viewed over a longer period—from April to July—India’s trade deficit stood at $63.6 billion when compared to the $54.1 billion during the same period last year.

All this has given a scare to investors, economic observers and people in general. An eerily similar situation arose five summers earlier in 2013 when the rupee nosedived in what was known as the ‘taper tantrum’. That year, the US Federal Reserve announced that it was winding down its open-ended programme of purchasing private securities. Within no time, the rupee tumbled by almost 21 per cent within a span of a few months. But that is where the similarity between the two episodes of volatility in the rupee’s value ends. In 2013, India’s current account deficit (CAD)—basically an excess in the value of imports of goods and services over exports of goods and services—stood at an alarming 4.3 per cent of gross domestic product (GDP). In FY19, this figure is expected to be much lower at 2.4 per cent of GDP. In 2013, inflation was close to double digits and the Reserve Bank of India (RBI) was hampered in its attempts to bring it down due to the lack of effective coordination with the Government. For the rate of inflation to come down, a reduction in Government expenditures was part of the medicine, something the last government refused to take in. In contrast, in 2018, inflation has largely been tamed.

That, however, is only a partial view. When compared with FY18—when CAD stood at 1.8 per cent of GDP—the figure has jumped greatly within a single year. Then, there is a generalised loss of interest among investors in emerging markets, especially after the rout of the Turkish lira in response to the mismanagement of that economy by its President Recep Tayyip Erdog˘an.

For India, there is likely to be more trouble ahead. If there is one economic indicator that foreign investors watch carefully, it is CAD. If the forthcoming trade data release is anything to go by, there are indications that India’s trade performance is likely to worsen, adding further pressure on CAD. The US Federal Reserve is also likely to make an announcement on interest rates sometime this month. Any rate-increase decision is likely to lead to an outflow of money from India.

If the economics of oil prices and rupee’s volatility is clear, the politics over these issues is muddled

Is there anything that the RBI and the Government can do? The one knee-jerk step that uninformed persons recommend is for the Central bank to ‘save the value of the rupee’. For a currency whose value is determined by markets, this is a poor choice. What the RBI can do—and it does—is to temper the volatility in the price of the rupee. This is very different from committing a country’s foreign exchange chest to ‘save its value’, a policy that never works in market economies. Since April, India’s foreign exchange reserves have come down from a historic high of $426 billion to roughly $400 billion in August, implying an expenditure of close to $26 billion in checking volatility in the rupee’s value in the currency market.

It is quite likely that when RBI’s monetary policy committee meets in October, it may go for an increase in the repo rate—the rate at which RBI lends money to banks—a step that will be in sync with efforts to arrest volatility in the currency market. Technically, the RBI ‘targets’ inflation and not the exchange rate of the currency. But in the given circumstances, this will probably be the right step to take.

Another step that has been speculated in recent days is that of issuing bonds for sale to non-resident Indians (NRIs) to attract foreign exchange. This is historically an option that has been exercised whenever the country has needed foreign exchange and when other options have not been easily available. In 1998— the year when India tested nuclear weapons and was sanctioned for the step—foreign-bond sales were roped in to bolster the country’s foreign-exchange reserves. The same step was taken two years later in 2000. The most recent episode of such sales was in 2013.

There are other steps the Union Government can—and should—take. Whatever the critics may say, it should not under any circumstance reduce the additional excise duty and the road cess it levies on petrol and diesel. (These amount to Rs 19.48 per litre for petrol and Rs 15.33 per litre for diesel.) One, reducing excise will not reduce the demand for these fuels. It should be remembered that India imports close to 90 per cent of the fuel it consumes (crude oil) and the vast bulk of this goes into private consumption by the transport sector. It is economically senseless for a country to reduce the price of a commodity it largely imports and does not produce, and one that is a consumption good. Two, any reduction in levies by the Union Government will lead to a deterioration in CAD, further exerting pressure on the rupee. In trying to ‘solve’ one problem, it will exacerbate another. Finally, once an excise reduction is effected, it becomes politically very difficult, if not impossible, for a government to re-instate it. The last time this was done was in June 2011 when the then Finance Minister Pranab Mukherjee slashed customs and excise duties on fuels. It took the NDA Government to fix India’s fuel economy when it assumed power in 2014. Fortunately, this Government has, so far, resisted the pressure to reduce excise. Three states—Rajasthan, Andhra Pradesh and West Bengal—have gone ahead and reduced the prices of fuels by tinkering with the state-level taxes on fuels. It is notable that Rajasthan and Andhra Pradesh are very close to state Assembly elections.

If the economics of oil prices and rupee’s volatility is clear, the politics over these issues is muddled. In the last one year, if not earlier, not one bit of economic data has been spared from political interpretations. In this all political parties are complicit. ‘Who bloodied the rupee?’ is a question that is political and not economic. This is usually followed by a litany of charges that has little to do with the economic reasons for the rupee’s decline. Invariably, this is followed by complaints against the goods and services tax (GST) being ‘ruinous’ for small traders and enterprises, and that usually closes the circle of charges against the government. The reality is far more complex: India’s inability to push exports and curb the consumption of fuels—even in metropolitan areas where public transport is much better than most of India—is among key issues that end up creating this twin problem. Is this something that any government can fix with some policy steps? The choice of transport and garnering export markets are part preference problems and part due to lack of coordination among economic agents. Governments can only take incremental steps.

But no political party is immune from playing politics in this. Back in 2013, it was the BJP that was berating the Congress-led United Progressive Alliance for the ‘destruction’ of the rupee. Now the boot is on the other foot. What needs a change is the behaviour of the parties that tend to look for opportunities everywhere to score a point against the government of the day. Economic outcomes— which arise by a very different set of reasons—should be spared from political mudslinging. This is all the more so as toxic political claims and counter-claims generate economic expectations that are often beyond political control and to the detriment of everyone.