Abe and Mo: A Love Story

The benefits of a bullet-proof partnership 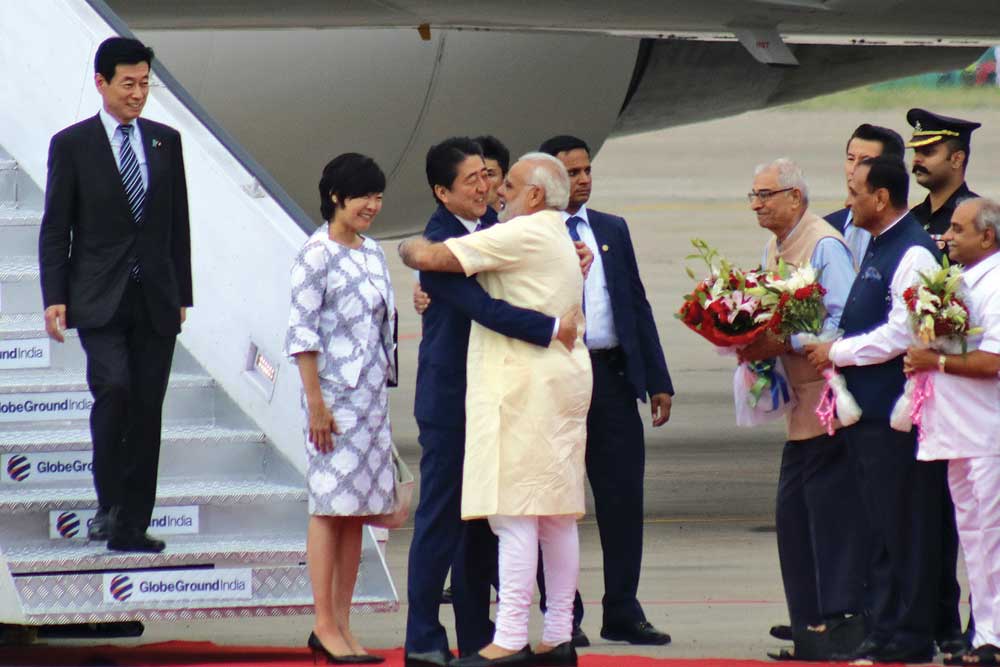 AROUND A FORTNIGHT before Prime Minister Shinzo Abe was to land in Ahmedabad, Tokyo made a query at the National Museum in New Delhi about the original tiny statue of Mahatma Gandhi’s three wise monkeys. Incidentally, it is kept with his spectacles and other small possessions at Gandhi’s ashram on the banks of the Sabarmati river, where Modi and Abe were to spend some moments together.

The three monkeys—Mizaru, who sees no evil, Kikazaru, who hears no evil and Iwazaru, who speaks no evil—were gifted to Gandhi by the Japanese Buddhist monk Nishidatsu Fuji, who had become close to him. One of the oldest depictions of the three monkeys, a concept introduced in Japan by a Buddhist monk in the 8th century CE, can be seen in Japan in the 1617 Shinto Tshogu Shrine of Nikko.

Abe and Modi would not let the ‘three monkeys’ connection escape the bonhomie between them. When the two leaders reached Sabarmati ashram, Modi showed Abe and his wife Akie, who were dressed in Indian attire, a marble replica of the monkeys. During his first visit to Japan after taking over as Prime Minister, Modi had recalled the link between his icon Swami Vivekananda and Japan. He gifted Abe books on Vivekananda (who had visited Japan on his way to the World Parliament of Religions in Chicago in 1893).

A decade after their first meeting in 2007, Modi and Abe still go off the beaten path, adding new dimensions to their personal connect, identifying links between the two countries and familiarising their palates with each other’s cuisine and culture. Their bonding has set the tone for strategic and economic ties between the two nations. Their every meeting—over half a dozen so far—has seen the two leaders going out of their way to make special gestures towards each other while leaving a mark on the course of the courtship between India and Japan. This time as well, as Abe arrived in Ahmedabad on the afternoon of September 13th for the 12th Annual Summit between the two Asian countries, the chemistry between the leaders was on display—in their hug at the airport, at an eight-km road show, and in shared moments on the Sabarmati riverfront.

“Modi and Abe hit it off well. Modi has had a special attachment to Japan since his days as Gujarat Chief Minister. When Abe came here in 2007, he had expressed his fondness for India and spoke of his grandfather Nobusuke Kishi’s recollections of India which he visited as Prime Minister in 1957… Abe has been in power for five years and the framework of a partnership was already there, but Modi and Abe have accelerated the relationship, focusing on strategic cooperation,” says C Raja Mohan, director of Carnegie India.

The last time Modi took a stroll along the Sabarmati with a world leader was when Chinese President Xi Jinping visited India in 2014. This time, the Chinese would be watching Modi’s engagement with Abe closely. Tokyo did not hesitate in backing India over the standoff with China in Doklam. Japan has had its own share of disquiet over Beijing’s unilateral actions in another disputed territory: Senkaku Islands, called Diaoyu Islands in China.

While China’s One Belt One Road (OBOR) project revolves around a land corridor, Modi and Abe are focusing on the Asia-Africa Growth Corridor (AAGC), a sea corridor linking India and Japan with Africa and South East Asia. Modi had made the AAGC announcement in Gandhinagar at a meeting of the Asian Development Bank (ADB), and in Ahmedabad the duo gave another impetus to the cooperation between India and Japan. “They are trying to put in place an alternative narrative, not only of partnership but also global or regional development, where all stakeholders will benefit,” says Vijay Chauthaiwala, head of the BJP’s cell on foreign affairs.

India’s neighbours, including Pakistan, Sri Lanka, Nepal and Bangladesh, are among the 20 countries that have agreed to participate in OBOR. While New Delhi has ignored OBOR, over which it said India was not consulted, the AAGC is being seen as a way to counter China’s strategic intentions in the Indian Ocean.

According to military historian and author Edward Luttwak, defence cooperation between India and Japan needs corporate synergy. “Japanese companies have lots of technology, but they are not very dynamic. Private Indian companies need to expand much more,” says Luttwak. On the equation between Japan and China, which have endured years of frosty relations, he says, “The Japanese are the strongest at sea. Their submarines are really the best.” China cannot possibly invade or subdue Japan, he believes, unless a nuclear attack is launched to break Tokyo’s will.

Modi first travelled in a bullet train in Japan. He promised to introduce it to India during his 2014 General Election campaign. He has now fulfilled that pledge

Modi and Abe sense in their partnership an opportunity to strike a balance of power in Asia. Abe and Xi Jinping had their first formal meeting only in 2014, two years after they took charge of their respective countries. Abe’s homage to World War II Japanese soldiers who died on Chinese soil had not gone down well with China. Only recently have China and Japan made attempts to bridge the trust deficit between them. In contrast, New Delhi and Tokyo have not had a rough patch. “The India-Japan relationship has long been one of the fastest-growing in Asia. There’s such a strong dynamic of convergence thanks to many shared interests. Deeper defence cooperation is a logical step, particularly given each country’s rising concerns about China’s activities in the Asia region,” says noted foreign policy analyst Michael Kugelman.

Modi first visited Japan as Gujarat Chief Minister in 2007, two years after he was denied a visa by the US over the post-Godhra riots in the state. On a subsequent visit to Japan in 2012, Modi made it a point to mention that Tokyo had made an exception by inviting a state’s chief minister. He also declared that the 21st century would belong to Asia. Before that trip, Modi wrote, ‘This visit will be surely a win-win situation for both Gujarat and Japan both in terms of economic and cultural forms of cooperation.’

Modi and Abe are now making the most of their personal chemistry to line up high-value deals that will be beneficial to both countries. India is looking to Japan for capital, infrastructure and technology. On its part, Japan sees in India a strategic ally, an economic partner and a source of high-skilled technical professionals. The demographic contrast is sharp. About 33 per cent of Japan’s population is over 60, by 2014 statistics, while in India that figure is just 8.6 per cent. There are over 1.2 billion Indians, half of them below 25. This throws open a field of opportunities for Tokyo.

According to Kugelman, commercial cooperation has enormous potential, though there is a challenge of how to give foreign companies greater comfort while they invest in India. This is an issue that often comes up as New Delhi pursues closer economic relationships with other countries. “This is a country that is notorious for its red tape, corruption, and an overall problematic investment environment. Prime Minister Modi projects himself as a can-do pro-business reformer, and he’s certainly improved the investment environment in India, but there’s still much work to go. Even close friends like Japan worry about the pitfalls and challenges of trying to broaden economic relations with India,” explains Kugelman.

It was during his 2012 tour of Japan that Modi travelled on a bullet train to Hamamatsu through its industrial belt, an experience that impressed upon him a need to get such transportation technology to India. Having set his heart on it, he promised a bullet train in the run-up to the 2014 General Election. Three years later, he has fulfilled that pledge. With Abe, he has laid the foundation stone at Sabarmati Railway Station for India’s first bullet train. It will run from the biggest city in his home state, headed for elections later this year, to India’s financial capital Mumbai, a 500 km distance to be covered in two hours. Launching the Rs 1.1 lakh crore project, 81-per cent funded by Japanese soft loans at an interest of 0.1 per cent to be repaid in 50 years, Modi repeatedly referred to Abe as “my friend”. Abe, who began his speech with ‘namaskar’ and ended with “Jai Japan, Jai India”, described Modi as a far-sighted leader.

When Abe took to Twitter, for a long time he followed just three people—his wife Akie, writer-turned-politician Naoki Inose and Modi. The warmth between the two leaders, both known to be nationalist, having won decisively in elections in their countries after a spate of coalition governments, and both redefining their economic models, has been palpable in their tweets. Modi turns 67 on September 17th and Abe will be 63 on September 21st. ‘I am eagerly awaiting your arrival in Kyoto this weekend,’ Abe tweeted to Modi in 2014. In an unprecedented gesture, Abe travelled 500 km to meet Modi at Kyoto. Modi had tweeted before leaving India in Japanese and English that he ‘deeply respects’ Abe’s leadership. It was on that visit that the Kyoto-Varanasi Partner city Agreement was announced. During the same visit, Modi’s first outside the Subcontinent after taking over as Prime Minister, he urged Japanese businesses to consider India as a manufacturing base. The two leaders discussed Japan’s plans to set up industrial parks in India.

If in Japan the two leaders participated in a local pondside ritual called ‘feeding the fish’, which is supposed to signal an auspicious beginning, and a special Japanese ‘chai’ ceremony in Tokyo, in Ahmedabad Modi treated Abe to Gujarati delicacies and folk dances at a heritage restaurant.

Abe was one of the first world leaders to call up Modi to congratulate him when the BJP won power in 2014. Not a year has passed since that the two have not met, be it in India or Japan.