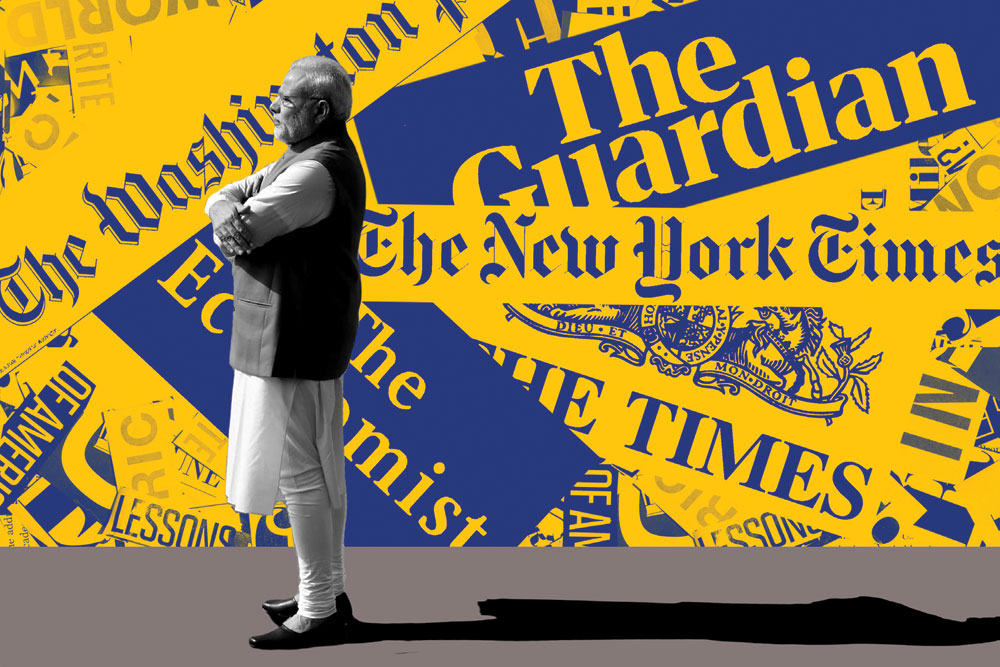 
INDIA HAS SELDOM monopolised as much newsprint, web content and airtime abroad as it appears to have since August 2019 when Article 370 was abrogated and Jammu and Kashmir’s special status revoked. The National Register of Citizens (NRC) exercise in Assam added fodder to Kashmir. And then there was the Citizenship Amendment Act (CAA). The compounded fallout is a coverage unseen since Emergency.

Discounting articles in Anglo-American publications written wholly by Indians, there are still a convergence of opinion and a replication of tone and tenor suggesting that India, rather its Government, is coming up short in the battle of perceptions.

A few recent headlines would suffice: ‘Grans ‘ready to die’ to stop Modi’ (by Christina Lamb, The Sunday Times); ‘Intolerant India: Narendra Modi stokes divisions in the world’s biggest democracy’, ‘The Muddle Modi made: Narendra Modi is damaging India’s economy as well as its democracy’, (leaders, The Economist); ‘Modi Makes His Bigotry Even Clearer’ (editorial, The New York Times); ‘Narendra Modi is India’s Trump’ (by Max Boot, The Washington Post); ‘India’s Narendra Modi has had a free pass from the west for too long’ (by Gideon Rachman, Financial Times); ‘Modi’s citizenship law: dangerous for all’, ‘Modi’s 100 days: trashing lives and the constitution’ (editorials, The Guardian), “Try to stop me’—the mantra of our leaders who are now ruling with impunity’ (by George Monbiot, The Guardian).

And a couple more headlines from Der Spiegel: ‘Ein Nationalist und seine 200 Millionen Feinde’ (A nationalist and his 200 million foes), ‘Millionen gegen Modi’ (Millions against Modi). (Der Spiegel’s English edition also ran a piece of reportage from Kashmir in November with the slug and headline ‘Deathly Silence: An Inside Look at Kashmir’.)

Given how much Prime Minister Narendra Modi had invested in reinventing Indian foreign policy since taking office in 2014, given also the hitherto demonstrated success of that overhaul, the global negative press today cannot be dismissed summarily as irrelevant and/or distant. Source, form and substance of a message matters, and a message once delivered, irrespective of veracity, is read or heard. Often by the key individuals and institutions abroad on whose words and actions much of the success or failure of a sovereign state’s foreign policy hinges.

Now, if we take a recent article as illustrative of most of the rest (Christina Lamb’s report in The Sunday Times , February 2nd), we may find three absences: one, how exactly the CAA relates to the Constitution, whether it’s an ordinary law or constitutional amendment; two, whether the law is retrospective or prospective; and three, whether citizenship can be granted to persecuted Muslims from the neighbourhood under alternative legislation. Missing, too, is a comment from a community leader, important or otherwise, who might have sought to allay fears. (For instance, Shahi Imam of Jama Masjid Syed Ahmed Bukhari’s statement in December 2019 that the CAA has “nothing to do with Muslims living in India” hasn’t featured in any of the articles cited here.)

It might be argued, in some quarters, that some room could have been given to exploring such issues. But then, we don’t know if such points are ever made to the foreign press. What we do know is that, unnecessary adverb notwithstanding, lines like ‘Mr Modi’s policies blatantly discriminate against his Muslim compatriots’ (leader in The Economist, January 23rd) are being written and read. Or, ‘Mr Modi is also tarnishing the memory of Mahatma Gandhi.’ A passage like ‘The Supreme Court, which… declined to suspend the citizenship law, should heed this, show some unexpected spine and declare it unconstitutional’ may be a tad over the top, but there are subtler engagements that tend to explore alternatives, such as the opening of a New York Times (NYT) editorial: ‘On the face of it, India’s new citizenship law might seem quite reasonable…’ And yet, when NYT concludes that ‘The law, as India’s 200 million Muslims have correctly surmised, has nothing to do with helping migrants and everything to do with the campaign by Mr. Modi and his home minister, Amit Shah, to marginalize Muslims…,’ it takes us right back to the battle of perceptions.

One may be sceptical about the chances of 200 million people thinking exactly the same about the same, but together, the articles build up a narrative India’s policymakers, especially those in the foreign office, may want to take seriously. After all, the foreign press is relaying its perceptions, what it’s seeing in and hearing about India. If the result is unflattering, it’s evidence, at the least, of New Delhi not getting its own message right, if it has one.

It wasn’t all that long ago when Modi was still feted by the media abroad, for his pro-active engagement with world leaders or the provision of toilets to India’s poor or his unwavering stand on climate change and clean energy. None of those facts has changed. Yet, the conversation, or the message, appears to have morphed into what Gideon Rachman’s piece in Financial Times conveys: ‘Modi has had a free pass from the west for too long’. True, the only comment Rachman deploys is Amartya Sen’s, borrowed from The New Yorker and critical. He also lays the blame, as do several other commentators, on the ‘Trump administration’s failure to make a fuss about human rights’, thereby acknowledging, in his way, that Modi’s India still enjoys ‘strategic and diplomatic’ heft.


The articles and editorials build up a narrative India’s policymakers may want to take seriously. After all, the foreign press is relaying its perceptions, what it is seeing in and hearing about India. If the result is unflattering, it is evidence, at the least, of New Delhi not getting its own message right, if it has one

Two trends are discernible. One is epitomised by a line from the NYT editorial: ‘This is not the way India was meant to be.’ This apparent civilisational angst on India’s behalf is the milder note in a narrative that can also say: ‘Mr Modi and his party have long peddled the idea that the Muslim-majority state of Jammu and Kashmir benefited from unwarranted constitutional protections. The BJP argued, absurdly, that the continuance of a low-level insurgency stemmed not from a heavy-handed military response with torture and killings… but from the special treatment Kashmiris receive’ (editorial in The Guardian, September 2019).

The other trend is the increasing comparison, or even bracketing, of Modi with others long identified as ‘authoritarian’ by the Western media. With a few characters rotating on and off the stage, the standard cast features Donald Trump, Vladimir Putin, Jair Bolsonaro, Viktor Orbán, Rodrigo Duterte and, these days, sometimes even Boris Johnson. Not every writer involved in this bracketing is politically unambiguous like George Monbiot. And while the earnestness in Monbiot’s factually cavalier ‘Modi has ripped up the constitution to annex Jammu and Kashmir’ may be laughed off—as well as the categorisation and label questioned—what’s undeniable is that categories and labels tend to take on lives of their own, not least because they are neat and have instant recall.

Too much or too little will be made of George Soros’ declamations at Davos and his commitment of $1 billion to fighting ‘nationalists’, including in India. The Virginia-based conservative media watchdog, Media Research Center, has claimed that over 30 big media outfits are linked to Soros. Be that as it may, India’s image abroad, deservedly or undeservedly, is at its nadir in many years. There’s a fact calling for attention.