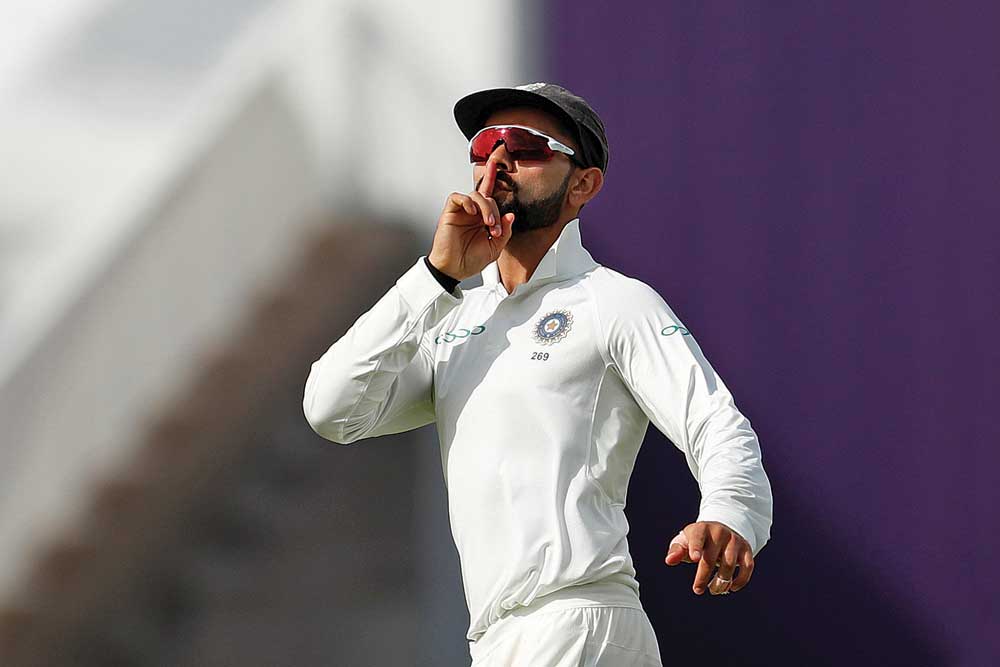 VIRAT KOHLI IS fond of mirrors. A story— often narrated by the man himself—goes that in 2012, Kohli stared into a hotel-room mirror after a shower and his reflection changed not only the course of his career, but in many ways revolutionised the game itself. Had he not sought the truth in its naked form, stripped of all pretences, Indian cricket would not have ushered in its fittest era as swiftly as it did; today, budding cricketers around the country, most of whom are Kohli wannabes, are as focused on their core as they are on cover drives.

By his own admission, the mirror-peering Kohli saw an overweight man ‘unfit to be an international sportsman’. And out went the late nights and candy bars and in came a daily regime of discipline, intense training sessions and a no-carb, protein-rich diet (fact: Kohli says he hasn’t eaten a roti in five years). The results were so radical that it inspired a generation of Kohli lookalikes—every Indian batsman of worth sports his beard, brawn and tattoos, if not his tenacity—and startling enough to make Kohli a staunch believer in the powers of self-reflection.

Last week, at the end of the first Test in Edgbaston, Birmingham, Kohli was talking about mirrors again. At the presentation ceremony after India’s narrow 31-run loss, in which he had scored nearly half of his team’s runs over two innings (200 of the 436), the Indian captain was asked by the interviewer what his batsmen could do differently before the second Test at Lord’s began. “Just look in the mirror,” he replied. “There’s no hiding from this game. When we step on the field, whatever you are feeling inside will come out in no time. So we just got to be positive, fearless and enjoy our cricket.”

Over those five rest days, one of two things happened. Either none of the players did as told or all of them were smitten by what they saw. For here’s the thing about mirrors—they have the eerie ability to feed on the seer’s vanity, reflecting exactly what one hopes to see. The musers must’ve surely hoped for and perhaps have even foreseen a comeback into the series. In reality, Kohli’s team, the top ranked Test side in the world, played with the conviction of rank outsiders, suffering their most humiliating long-format defeat in recent memory.

The Lord’s scoreboard is only the visible edge of the iceberg. It tells you that India lost by an innings and 159 runs in four days; nothing scandalous in either of those numbers. But if you account for the steady London rain that accounted for the entirety of the first day’s play and washed away intermittent chunks of cricket from the remaining three days, Kohli’s side lost the second Test within two days and change.

But the match was conceded long before the eventual end. On the second day—the first of this game—only 35.2 overs, or the length of an extended session, could be played between bouts of wet weather. In that period of play, India were rolled over for 107 runs.

They didn’t fare much better in the second innings, razed for 130 runs in 47 overs. So, if India’s two batting innings were to be lined up alongside each other, Kohli’s men would’ve been bowled out twice in under a day; or, to be precise, in 82.2 overs—46 balls short of a regular day of Test cricket. The statistics only get more abject when you consider this: 22 Indian players scored a total of 237 runs in the same game (and on the same pitch) where England’s wicketkeeper and bowling all-rounder, Jonny Bairstow and Chris Woakes respectively, scored 230 runs between just the two of them.

It could be argued that India’s batsmen had the worst of the weather conditions. On either side of England’s batting innings, spells of rain and bad light constantly interrupted play, ensuring, among other things, that momentum never was on the visiting team’s side. On the fourth day, in fact, the weather around London’s NW8 was bright all the way until England declared their innings. Then, just 10 minutes later when India’s openers walked out to bat, the sky had coagulated, the abundant cloud cover tipping the balance heavily in favour of England’s swing bowlers.

The Indians, it seems, perhaps even believed it to be a climatic conspiracy. Ian Botham, once England’s finest all-rounder and a Sky Sports commentator today, revealed plenty about the mindset in the Indian camp when he said, on-air: “I met Ravi [Shastri, India coach], who told me, ‘Beefy, what an important toss to win for England’.” Kohli, though, was in no mood for excuses when he was asked about it publicly, at the presentation ceremony.

“It is what it is, you have to counter the conditions as and when they come to you,” he said. “You can’t sit in the change- room and crib about these things. Sometimes the rub of the green goes your way as well. You have to accept that it is a part of the game. [England] were relentless with the ball and put a lot of pressure on us. The credit has to go to them.” And credit (where it is due) has to go to Kohli as well for rejecting the lifeline on offer and drowning with his dignity intact.

What, then, is ailing Indian cricket in overseas conditions if it isn’t the overseas conditions itself? The prime culprits, right through the history of Indian cricket, used to be the fast bowlers, who just weren’t good enough to dismiss the opposition twice to win India Test matches. That, of course, isn’t the case anymore with India’s current crop of pacers, who have led the way in claiming all 20 wickets in each of the four Test matches away from home this year prior to the Lord’s game—thrice in South Africa and once in England.

Could it then be the batsmen, who have failed to hunt down targets of 208 runs (Cape Town), 287 (Centurion) and, more recently, 194 (Edgbaston) this year alone? ‘Yes’ would be the obvious answer. But what if you were informed that not once in any of the overseas Tests in 2018, across South Africa and England, has the captain and the team management retained the same set of batsmen that played the previous Test? In fact, every frontline batsman apart from Kohli and opener Murali Vijay has been dropped at least once in the space of five Tests and eight months.

Captain Kohli’s unorthodox ways aren’t restricted to 2018; it has been emblematic of his captaincy career, dating back to early 2015. Since becoming the full-time Test captain, Kohli has changed his playing eleven in each of the 36 Test matches he has been in charge of. And no one apart from the captain and nine-Tests- old Hardik Pandya has been spared the drop. Every batsman, bowler, all-rounder and wicketkeeper to have played under Kohli—and there have been 28 of them apart from Pandya—has been made to feel unwanted at some point or the other. Think about that, for therein lies the rub.

SINCE KOHLI’S TEST debut in 2011 and all the way until the end of last year, India had played 21 Test matches in the four countries they have traditionally feared touring more than the others: England, Australia, South Africa and New Zealand. In those 21 Tests, India won just one: at Lord’s in 2014. Of the remaining 20, India lost 15 and drew five. Yet, when 2017 turned 2018, the year India were scheduled to tour South Africa, England and Australia back-to-back-to-back, there was a sense of anticipation like never before. Not just because the side had dominated Test cricket during Kohli’s three-year regime (played predominantly in home conditions), but mainly due to the fact that India, at long last, had a pool of players to win anywhere in the world.

This Indian team boasts of a formidable batting attack, led by Kohli himself, who is well on his way to becoming the greatest batsman this country has ever produced. And unlike touring Indian squads of the past, the current crop is powered by a ferocious bowling turbine as well. It consists of three of the best spinners in the world and five quality fast bowlers, with any one of Mohammed Shami, Bhuvneshwar Kumar, Ishant Sharma, Jasprit Bumrah and Umesh Yadav leading the attack on their day. And when a genuine all-rounder in Pandya seamlessly fit into the system just ahead of 2018, fans and pundits alike assumed that the final jigsaw had fallen in place.

But here’s the thing about cricket. Great squads don’t win matches; the right playing eleven does. After India lost the South Africa series in Centurion, Kohli was asked by a member of the Indian media if he had indeed fielded the best playing eleven; an eleven that didn’t have Bhuvneshwar, who had taken the most wickets for India in the previous game at Newlands (6), and Ajinkya Rahane, who was yet to feature in this series despite averaging 53.44 in overseas Tests and having scored six of his nine Test hundreds away from home. Kohli, of course, found the line of questioning repugnant.

“What is our best eleven? Had we won this match would you have called this the best eleven?” he shot back. “You are saying I could’ve played my best eleven, so tell me what my best eleven is?” That final question, ‘tell me what my best eleven is’ is usually posed by a cricket captain to his management and coach, not the media, even if it was put forth with tongue firmly in cheek. But any coach who has allowed his captain’s chopping and changing ways to go unchecked right through his coaching tenure wields little or no power at all, and incumbent coach Ravi Shastri has seen better days.

Kohli, however, was quick to soak up all the blame when he admitted that the team combination for the Lord’s game was the wrong one. Despite the overwhelming presence of fast bowling conditions and an extra day to come up with the eleven (the first day was washed out), India played an extra spinner in Kuldeep Yadav when a fourth quick could’ve made all the difference, especially when the three in rotation had reduced England to 89/4. “Combination was a bit off,” said Kohli, disarming the interviewer with his honesty. “But [there’s] a chance to correct that in the next game.”

Kohli, better than most, understands that all sportspersons err, but only the best take a life lesson or two from each mistake. But it wouldn’t be a day too early if he, Kohli the captain, does what Kohli the batsman did in front of a mirror all those years ago.