Coping with the Worst Wave

The government behaves exactly as people do—it acts by convenience 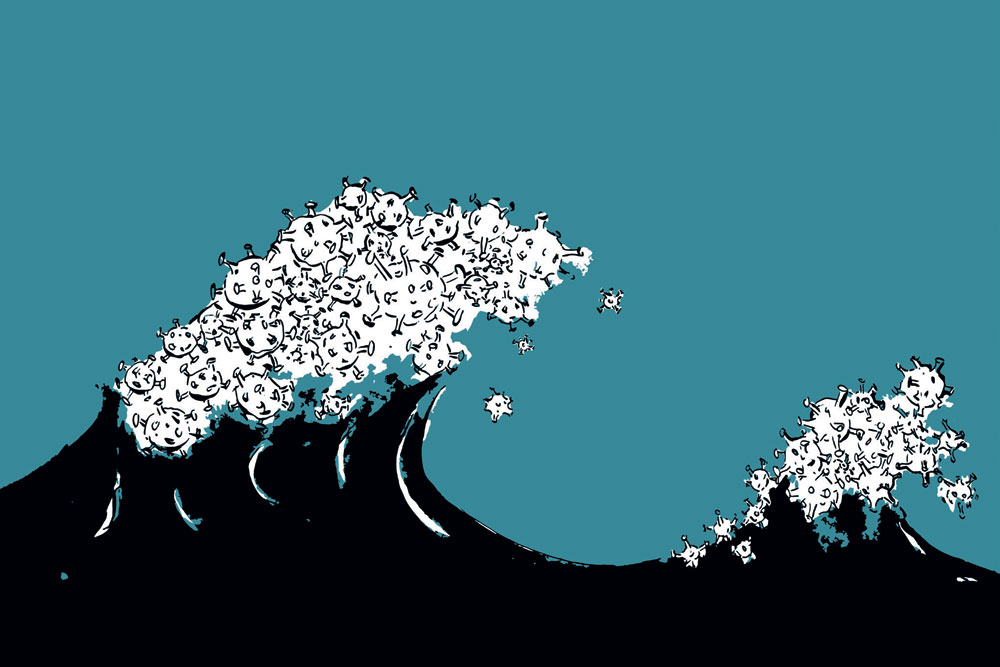 
IT IS NOT APT to attribute human properties to viruses but, should you do that, it would not be remiss to call SARS-Cov-2 as clever. Not only has it shape-shifted to become considerably more infectious, but it waited until guards were down to come with such intensity that nations have been left stupefied at the suddenness of the confrontation. In this, India has just joined countries like the US, UK, Brazil, France, Canada and more. But it is not just the manner of its ambush, also the new armours that the virus creates for itself. A Times of India article said that RT-PCR test, which the medical establishment relies on for conclusive diagnosis, is less accurate in picking up positives now. The report said: ‘City [Delhi] hospitals say they are getting cases where a patient has typical symptoms of the disease but tests negative for the viral infection, sometimes twice or thrice even through RT-PCR, considered the gold standard for Covid testing. “We have received many such patients in the past few days. They had fever, cough, shortness of breath and the CT scan of the lungs showed lighter-coloured or grey patches. It is referred to as patchy ground glass opacity in medical terms. The condition is one of the defining characteristics of Covid-19,” Dr Aashish Chaudhry, managing director of Aakash Healthcare, said.’ The virus has managed to add a layer of concealment to itself.

In the face of such an enemy, what was the response that we saw? There was the hypocrisy of the governing establishment. All governments like to thrust the responsibility of the spread onto the public—it is because they became lax that the virus was able to get such a foothold again, they didn’t mask and they didn’t follow social distancing. But government behaves exactly as people do—it acts by convenience. Exams for school and college students are now being postponed to prevent transmission and spread but in Haridwar, there is the Maha Kumbh festival going on in full swing. It should never have been permitted because of the huge gathering that would be impossible to either control or monitor. A report in Mint said: ‘The ongoing Maha Kumbh mela in Haridwar is attracting about 1-2 million people on a regular day and about 5-6 million people are attending the mela on auspicious days [bathing days]. The Central Government earlier in March warned the Uttarakhand government of a potential surge in Covid-19 cases in the local population in Haridwar after the auspicious Shahi Snan days during the ongoing Kumbh Mela. While over 6 lakh people took a holy dip on Wednesday, around 1,000 people have already tested positive for Covid-19 in Haridwar in the last two days.’

The 1,000 pilgrims being infected is only the beginning. The true fallout will only be known a couple of weeks down the line when all these people go back to their hometowns in the rest of the country. If ever there was a perfect superspreader storm in the middle of a wave that medical science has little clue about, then this was it. But, despite the Centre warning his government, Uttarakhand Chief Minister Tirath Singh Rawat went ahead. A year ago, the Tablighi Jamaat had been pilloried for hosting a religious event at the Nizamuddin Markaz and criminal cases filed against many after infections. When asked the difference between that and him giving permission to hold the Kumbh, Rawat’s reply was that one was held indoors and the other outdoors. Obviously, the 1,000 positive cases don’t agree with him. He also added, as reported in Scroll, ‘And this is near the Ganges. The flow and blessings of Ma Ganga will ensure that coronavirus does not spread. The question does not arise of a comparison.’

For the just concluded Assembly elections too, the political establishment had no problem permitting and organising massive rallies because these were necessities to them. These are all actions for which the price will be paid after a brief hiatus when the virus mobilises itself in fresh territories. The message the public takes from their leaders is that this is a disease in which your response can be malleable depending on circumstance. It is a new game of high stakes being played by the old rules and, naturally, there is payback.

Take India’s vaccination strategy. Countries like the UK, the US and Israel gave money at the development stage and booked orders anticipating what would happen down the line. India was enthusiastic about controlling without paying up. And now it has the worst of both worlds, vaccines which it relied on are getting over and it has to go back to the same manufacturers whom it had rebuffed hoping for a miracle. This week, when the Government announced that vaccines, which had been given permission in countries like the UK, US and also listed by the World Health Organization, could be used here as an emergency measure, it is an admission of its failure. Manufacturers like Pfizer had been denied the Indian market citing these regulations months back. That is time lost. Before the rule change allowing more vaccines, Sputnik V, the Russian vaccine, had been the third that got approval recently, and even though it already has local partners preparing for manufacture, it will take a couple of months before it becomes available, and initially, it will be imported. A full rollout of Sputnik V in sizeable numbers is some way off and will not help in the current Covid wave. The only tool that is available in a situation going out of control is the lockdown.

On April 13th, in an online meeting with the World Bank president, Finance Minister Nirmala Sitharaman said that there would not be a national lockdown. She told him: “Even with the second wave, we are very clear that we are not going in for lockdowns in a big way. We don’t want to totally arrest the economy.” A day after, Delhi announced weekend lockdowns. This was how Mumbai too started but as cases started to shoot up, the state government became afraid enough to do a complete lockdown for 15 days. The Delhi government is seeing close to 17,000 cases a day now, almost double of Mumbai, and should there be no decrease and the healthcare system collapses, they will also have to impose a total lockdown. If Mumbai and Delhi are in lockdown, then the national economy will be in a strangle even if no national lockdown is ever announced.

And in the worst-hit cities, oxygen supply, which could mean life or death for Covid patients, is at stretching point. There are no hospitals and ICU beds. And the manner of Covid’s spread is all too well known. It jumps from region to region. What Mumbai and Delhi face today, the rest of the country will face tomorrow. Time magazine ran an article recently with the headline ‘Officially, India Has the World’s Second-Worst COVID-19 Outbreak. Unofficially, It’s Almost Certainly the Worst’. Because for every reported case, there might be as many as 30 infections. And this might not even be the peak.