Why Stock Brokers Have Gone Broke 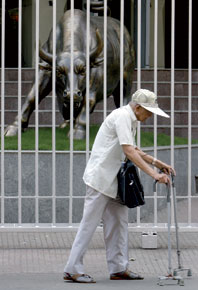 
Among the businesses that have suffered the wrath of India’s economic downturn, stock broking is a peculiar case. It has been under stress for want of retail participants in stockmarkets, especially since the end in 2008 of the bull run that began in 2003, but it has suffered a grievous blow over the past year or so. “The economics of retail stock broking has become unviable for every player, big or small,” says Basant Maheshwari, an analyst who runs an online forum called The Equity Desk. Over the past decade, he says, the industry has seen a major shake-out, with lots of brokerages shutting down or being taken over. Yet, there has not been enough business for the few left. Despite a drastic drop in brokerage fees, retail trading volumes did not expand along expected lines, squeezing revenues even as overheads kept going up.

But is the downturn the sole villain of this story? “No,” says a leading fund manager. A credibility crisis, he says, has also played a role in the decimation of brokers. Overcome by their greed for easy brokerage fees, which they earn on every trade, many offered clients advice that was inappropriate. “The buy-now-and-sell-tomorrow advice tendered by brokers has killed the very hen that used to lay golden eggs for them,” says Maheshwari.

Market watchers say that during the boom phase of 2003-08, retail investors were prodded to buy shares of companies in sectors that were the flavour of the period: infrastructure, real estate and capital goods, among them. Some investors did make money while the going was good, but a vast majority were left holding the can once prices crashed. Since their peaks five years ago (or more), most of these stocks have lost 50-90 per cent of their market value. This has left investors bitter. Nor has the current stockmarket upturn, fuelled by foreign inflows, seen them recover their faith in brokers. Most demat trading accounts, which cover only about 2 per cent of India’s population anyway, remain dormant today and this explains why so few people are cheering the Sensex’s new highs. By and large, retail investors appear to have reconciled themselves to fixed deposits and gold holdings for their long-term savings. Risk aversion remains high and the Sensex is looking more and more out of touch with wider investor sentiment in the country.

In this dismal market scenario, India’s surviving brokerage businesses need to re-orient their game to focus on clients. They must clearly spell out who and what they stand for.