Who Killed the Reforms Rabbit?

The Indian middle-class, the biggest beneficiary of liberalisation, is the prime accused. Here is why 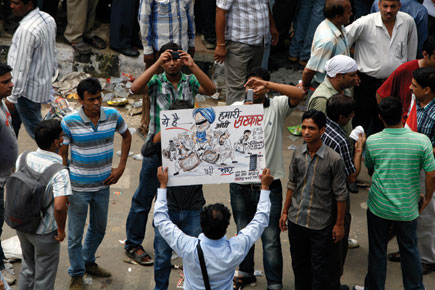 The Indian middle-class, the biggest beneficiary of liberalisation, is the prime accused. Here is why


For many of India’s hundreds of millions of ‘reforms children’, born after 24 July 1991, and tens of millions of ‘reforms youth’, who were teenagers then, market-oriented policies have become anathema. Today, liberalisation’s biggest beneficiaries are also its biggest bane. It is this combustible combination that has—partly—led swarms across the country to rally in support of Anna Hazare’s campaign against corruption. They may not say so, or even admit it to themselves, but for many protestors, their fight in some ways is also about forestalling further market reforms.

In 1991, when Finance Minister Manmohan Singh dismantled the Licence Raj and gave market forces a leading role in forging India’s economic destiny, he not only drew millions more into the middle-class, he gave them the prosperity and power that underlie their apparent aspirations to greatness today.

Even as the upper-crust hanker after second cars and bigger houses, their ‘Yeh dil maange more’ cries as insatiable as ever, they find their anxieties echoed by millions who earn less but are eager to gatecrash their party. In an ironic twist of fate, both middle-class achievers and aspirants—who together number about half a billion—feel threatened by renewed reforms. They have developed a set of vested interests in the status quo.

To cite an example, if the economy hopes to rein in inflation, the central bank has to raise interest rates, as it has done over the past year-and-a-half. But higher rates mean higher EMIs for houses and cars, something that irks the middle-class. Similarly, the Centre can help contain prices by reducing its subsidy bill. But this would anger rich farmers (users of cheap fertilisers) in rural areas and middle class consumers (of low-cost petrol, diesel and LPG) in urban ones. To contain its fiscal deficit, the Government could also cut its own running expenses, but this could result in job losses in the bureaucracy and state-owned units.

Whatever it is that the Centre can or cannot do, the middle-class has clearly lost patience. Observes EAS Sarma, a former finance secretary, “Everyone [in the middle class] is angry with something or the other.” And the anger is spreading.

The co-accused in the case of killing reforms can be located within government corridors. Under UPA-I, fingers were pointed at the Left parties, though it was arguably the left wing of the Congress that did the deed. Remember, once the NDA of ‘India Shining’ fame was voted out in 2004, it was conventional wisdom in New Delhi that wooing the aam aadmi was the key to political success. This translated into populist schemes such as the farm sector loan waiver, NREGA, and much else on the agenda of the National Advisory Council (NAC) that went against Prime Minister Manmohan Singh’s market orientation.

Under the Left-free UPA-II, little has changed, except that the NAC has taken over the Left’s role. “Both populism and fiscal prudence cannot go together,” says Barun Mitra, managing trustee, Liberty Institute, a Delhi-based think-tank, explaining why 2011 is different from 1991. Twenty years ago, the then PM Narasimha Rao gave Singh a free hand and took the political flak for his reforms. Today, Singh is so hamstrung that he rarely speaks his mind, either because of coalition compulsions as he has admitted, or the Sonia Gandhi-led NAC’s oversight—as plenty of observers suspect.

Despite populist pressure from 10 Janpath, many expected the PM to balance the scale with some reformist moves of his own, if only to guard his legacy of liberalisation. But with the middle-class turning against him, he has been left without a constituency to draw popular support from. And in politics, being an electoral asset is crucial in gaining space for manoeuvre.

To many, Manmohan Singh has been a let-down. What they wanted was an incorruptibly ‘strong’ leader, what they got was an incorruptibly impassive one, wracked by scandals he ought to have stopped. Today, most experts agree that there is a leadership vacuum at the top. Forget coalition partners, the Congress party itself seems utterly divided over matters of economic policy.

For example, while the former environment minister Jairam Ramesh went about blocking big mining projects (think Posco and Vedanta) in favour of tribal and local interests, the PM’s man Friday and Deputy Chairman of the Planning Commission Montek Singh Ahluwalia was expressing alarm at such moves for injuring India’s growth prospects. Though the foreign investment expected in both cases was huge, charges of crony capitalism by observers have ensured that middle-class opinion is now against these projects. The left wing of the Congress has won this one too.

What the middle-class expects of the Government is governance, not policy reforms. “Reforms is a black box,” as Sarma explains, “Ultimately, they should lead to transparency in policies, competition in business and government accountability to citizens. What we have seen in the past two decades is a decide-announce-and-defend form of governance, where the Government decides policies, announces them, and then defends them.”

A case in point is the 2G scam. In 2003, after Reliance and Tata used a loophole in the existing telecom policy to launch their CDMA services (as opposed to GSM), the NDA regime gave them a stamp of legitimacy. Later that year, it let all operators offer services using either CDMA or GSM technologies. Since CDMA players had gained a free entry to the sector, the policy spawned a series of distortions, resulting in 2G licences and spectrum between 2003 and 2008 being awarded at 2001 prices.

After the scandal broke out, with the former Telecom Minister A Raja alleged to have handed out 122 licences in 2008 at throwaway prices, Raja’s successor Kapil Sibal defended the 2003 policy, arguing that there had been no loss to the exchequer, and that auctioning spectrum would only have meant higher phone bills for people.

Issues of performance and integrity are not all. There are two other dimensions to the middle-class angst vis-à-vis market reforms. First, the gains of these policies have not been uniform. Contrary to perceptions, large parts of the manufacturing sector have seen annual double-digit growth only five times over the past 20 years (in seven of these years, the figure has been below 5 per cent), even as the services sector has boomed. Agriculture, meanwhile, has been a story of stagnation.

Second, the global financial meltdown of 2008 gave people a vivid picture of the horrors of a free market run amuck. Suddenly, Indians saw the ugly side of globalisation, a lack of which had insulated them from jobs and investments going poof overnight. Once the West’s Great Recession hit, India’s economy dipped to a growth rate of under 7 per cent in 2008-09, from over 9 per cent earlier, but bounced back soon after. India suffered no bankruptcies and few job losses. This was a relief. In a 2009 article, Ruddar Datt, an economist, wrote that ‘the lesson of this experience is that India must exercise caution while liberalising its financial sector’.

Globalisation has, however, had an indirect fallout since then. India’s post-2008 stimulus, part of a ‘coordinated’ G-20 programme of extra spending and lending, left it with an incipient inflation problem. A quicker stimulus ‘exit’ could possibly have held prices in check without risking an economic slump, but since the spending gelled so well with the Congress’ populist impulses, this was not to be. Inflation flared up. The result: a double bind for the Government, with rising prices and EMIs gnawing away at household budgets.

Given that performance, governance and transparency are the key demands of the middle-class, its support for a potent Jan Lokpal is not hard to figure. What these folk want, arguably, is a policy status quo with a Lokpal watching over everybody, forcing the Government to be accountable to ‘the people’ (read: the haves, the Anna movement being a coalition of those who have too much and those who would like to have more).

It is true, though, that the middle-class was once betting on reforms as a way to reduce corruption. But those hopes of the early days now lie in shambles. As private players vie for public resources and contracts, space for State officials to pick winners and enrich them (in return for bribes) has expanded. And while you no longer wait forever to get a telephone, it is clear that black money and other ills have assumed outrageous proportions in India. In the mid-1980s, Bofors was a Rs 64 crore scandal. The 2G scam is Rs 1.76 lakh crore.

“The reference points have also changed,” says Ranajana Kumari, a prominent civil society activist, “Today, as more people can afford to buy a house or car, they become direct witnesses of corruption. They are confronted by demands to pay a part of the payment in cash to buy a house, or bribe a tout to get a driver’s licence.”

Reforms, one can argue, were never meant to be only about letting market forces run free. Regulation was meant to adapt to a reformed economy. “The biggest failing of Singh as PM for over seven years has been his inability to build and nurture democratic institutions that ensure that policies are implemented in a transparent fashion,” says Rajeev Chandrasekhar, an entrepreneur-Parliamentarian. “Regulation is an important element,” adds Sarma, “and the lack of it can easily lead to political patronage, as it has in the case of mining leases and allocation of 2G spectrum.”

Given this sorry state of affairs, middle-class folk feel obliged to voice their anger. They have chosen the easy way out in supporting Hazare’s cause. In doing so, they fail to understand the obvious: that heavyhanded policing is rarely if ever a solution. To quell corruption, Indian governance needs transparency, but far more critically, it also needs to contain the exercise of arbitrary authority. A supercop is not the answer.