His golden rule is ‘Never lose money’. He also said it takes 20 years to build a reputation and five minutes to ruin it. Has he finally ruined his own? 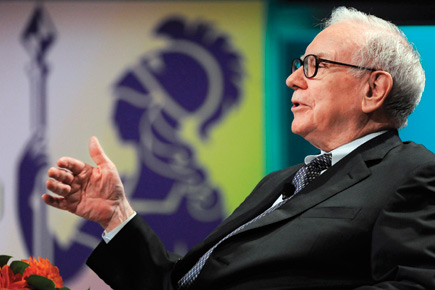 He said it takes 20 years to build a reputation and five minutes to ruin it. Has he finally ruined his own?


Anyone who hasn’t been within three miles of a stock exchange in life, let alone invest, knows who Warren Buffett is. He is history’s greatest investor, the third richest man in the world—$47 billion at last count—and one of the world’s greatest philanthropists: he has donated nearly $31 billion to the Bill and Melinda Gates Foundation. He is the Pope of money, and the annual general meetings (AGMs) of his firm Berkshire Hathaway, the gatherings at which he shares his worldview with common folk, are called the ‘Woodstock of investing’.

In the 2002 AGM, Buffett called derivatives “financial weapons of mass destruction”: “I view derivatives as time bombs, both for the parties that deal in them and the economic system. Unless derivatives contracts are collateralised or guaranteed, their ultimate value also depends on the creditworthiness of the counterparties to them. But before a contract is settled, the counterparties record profits and losses—often huge in amount —in their current earnings statements without so much as a penny changing hands. Reported earnings on derivatives are often wildly overstated. That’s because today’s earnings are in a significant way based on estimates whose inaccuracy may not be exposed for many years.”

Not only does Congress want all derivative contracts to be backed up solidly, it wants it to be done with retrospective effect. And that’s where Buffett has a problem. He has been lobbying desperately over the past few weeks to rid the bill of its ‘retrospective effect’ clause. Buffett’s point: Berkshire is sitting on $20 billion of cash and is financially robust enough to shrug its way through any trade that goes bad.

Buffett may be correct about Berkshire, but other investment banks and funds may not be so sound. The bill’s aim is to ensure that US financial markets don’t go through another crisis like the 2008 subprime one. Derivative contracts, where nothing tangible is exchanged—no money, no product—have been described aptly as gambling in a casino without having to buy the chips. But once your bet goes sour, you have to shell out the chips and more. In 1995, rogue trader Nick Leeson singlehandedly brought down his employer Barings Bank through wild derivatives trading. Buffett had gone on record then that he would never invest in derivatives because he did not understand them, and on principle, he never invested in anything he did not comprehend.

And the derivatives issue is not all. Buffett has publicly come out in support of investment bank Goldman Sachs, which is facing serious charges of fraud levelled by America’s Securities and Exchanges Commission (SEC). The accusation is that Goldman Sachs knowingly sold dud financial products to its clients and made millions in profits. Amid loud outcries for Goldman CEO Lloyd Blankfein to resign, Buffett, who invested $5 billion in the firm in 2008, says the bank has done no wrong. “I do not see a problem,” he told CNBC. He insists that Blankfein has done a great job of running Goldman. “I’d rather have him run it than anybody else,” he said.

Suddenly, the saint of the financial markets doesn’t look so saintly.

So, what did Goldman, the one investment bank that came out nearly unscathed from the 2008 Wall Street meltdown, do? It allegedly cross-played clients without telling them what it should have about each other. It let Paulson, a powerful hedge fund, select dud loan-deals for a package of synthetic collateralised debt obligations (CDOs)—don’t worry about details, these are paper assets ‘derived’ from loans people took—which Goldman sold to its other clients. It was clear right from day one that Paulson put together what it saw as the most rotten debts available, those which had no chance of being paid back, to package since it intended to ‘short’ them—that is, bet on the fact that their values would drop. Within a year, prices tanked, and Paulson walked away with a cool billion-dollar profit, which is roughly what Goldman’s clients lost. Goldman never told buyers that Paulson (which paid it a fee of $15 million to sell the stuff, a clear conflict of interest), betting against them, had also played a role in selecting the CDOs. Instead, it informed buyers that the CDOs had been handpicked by reputed fund management firm ACA Management.

The SEC alleges that Goldman told ACA that Paulson itself wanted to invest in the CDOs, and the fund’s boss John Paulson himself had faith in them. Goldman denies this. But the fact remains that if clients knew that the portfolio had been largely designed by Paulson, they would not have bought. Because Paulson had, months before the Goldman deal, created two funds specifically aimed at shorting the subprime market.

So what Paulson did, in effect, was build a house which is a huge fire hazard, bought hefty insurance; and Goldman, knowing the facts, sold apartments in the house to its clients. Goldman collected its brokerage, the apartment owners were not insured, and once the house burnt down, Paulson collected the insurance windfall.

Will the SEC win its case against Goldman? Unlikely, unless it can get hold of incriminating emails or phone recordings. The crucial factor is whether Goldman misrepresented Paulson’s intent to ACA. The SEC has no evidence of this. ACA vetted the CDOs, and overruled several of Paulson’s recommendations. John Paulson can say that he intended to invest in the CDOs at that time, and then changed his mind, which he has every right to do. Significantly, Paulson has not been charged with anything by the SEC. However, even if Goldman wins the case, investors would know what really happened, which could hurt Goldman’s credibility and stature.

And now Buffett says Goldman did no wrong and wants an exemption on collateral on derivative contracts he already has. This is the man who has epitomised honesty and humanity as much as uncanny financial acumen (I did a Google search for ‘Warren Buffett honesty’. The man has never said anything about that quality, and he speaks a lot!). I quote again from his 2002 speech: “In 1998, the leveraged and derivatives-heavy activities of a single hedge fund, Long-Term Capital Management, caused the Federal Reserve anxieties so severe that it hastily orchestrated a rescue effort. In Congressional testimony, Fed officials acknowledged that, had they not intervened, the outstanding trades of LTCM… could well have posed a serious threat to the stability of American markets. In other words, the Fed acted because its leaders were fearful of what might have happened to other financial institutions had the LTCM domino toppled. And this affair, though it paralysed many parts of the fixed-income market for weeks, was far from a worst-case scenario.” Like Paulson, Buffett has changed his mind.

After all, he has $5 billion invested in Goldman. We must remember what Buffett famously said: “Rule No 1: Never lose money. Rule No 2: Never forget rule No 1.” But we should also remember what he said on another occasion: “It takes 20 years to build a reputation and five minutes to ruin it.” The two revelations clash with each other as much as his public position on derivatives and his $63-billion derivatives portfolio.