DaSilva’s company Quo is selling Mac clones, but without the Mac OS. Is it legal? Well... 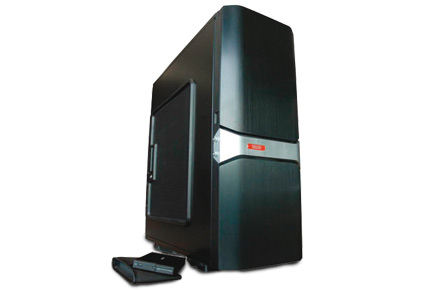 DaSilva’s company Quo is selling Mac clones, but without the Mac OS. Is it legal? Well…


Apple has always traded on exclusivity. Its Mac computers offer clean lines and a far simpler operating system than Windows. But that exclusivity comes at a price. Sure it’s possible to purchase an entry-level Mac for surfing the web, word processing and social networking, but the lightning-fast graphics intensive computers considered de rigueur by design professionals are far more expensive, running well over $4, 000.

So Sri Lankan-born infotech guy Rasantha DaSilva has  found a solution. In January 2011, DaSilva’s company Quo Computer will roll out the Quo maxQ2, which will feature an Intel Core i7 3.6GHz CPU, 12GB of RAM, a 240 GB SSD, a 1TB HDD, and an Adobe Mercury Playback Engine-compatible NVIDIA 285 GTX GPU. It will also be liquid cooled, which DaSilva says justifies its hefty $3,765 sticker price. The maxQ2, just like DaSilva’s other three models, runs the Macintosh OS.

Just don’t call the maxQ2 a Mac clone. If that sounds like a distinction without a difference, consider Mac’s history with clone makers. In the 1990s, when Apple was struggling for market share, it briefly licensed its operating system to other manufacturers like Power Computing. When CEO Steve Jobs returned to Apple in 1996 after an 11-year-absence, however, he reportedly paid Power $100 Million to stop manufacturing clones.

Since then, Jobs has maintained a strict no-clone policy. In December 2010, after aggressive legal action from Jobs and company, a California judge ruled that Miami-based Psystar could no longer manufacture clones. The company has since closed.

So Quo, which first opened its retail shop in a Los Angeles suburb in 2009, has pointedly sold computers with no onboard operating system.  Instead, Quo markets itself as a company that sells computers that can run the Mac, PC and Linux operating systems.  Users have to purchase their own copy of Mac.  This hasn’t stopped bloggers from predicting a massive lawsuit. ‘[The] QUO maxQ2 is a $4,000 Mac Pro Clone’ goes one headline on the website, Crunchgear. ‘Yeah, This Won’t End Well.’

So far, DaSilva has avoided a lawsuit. He even goes out of his way to appear unabashedly pro-Mac. He describes himself as a ‘Sri Lankan Mac guru’ on Twitter, praises the vision of company founders Steve Jobs and Steve Wozniak, and even sees the iconic brand as a crucial element of self-realisation. “People would always say that the Mac was for graphic guys and I used to hate that,” DaSilva says. “I would tell them to use a Mac for one month and tell me you are not more productive.”

Still, his souped-up clone will be aimed squarely at the creative market: video and audio editors, photographers and designers. This may be a tough sell to diehard Mac users like Pranab Dutta, who runs the Delhi-based advertising agency Great Latitude.  “I wouldn’t use it even if it performs good,” says Dutta, examining a picture of the Q2. “The looks of the Mac are very important to me. Besides design, it also has to look good in the office. The look of this machine is very PC.” Quo might be in trouble there.